Come on, Tony. F*cking Own Up to what you’ve Done.

*Editor’s Note: Following a year-long BuzzFeed investigation, Tony Robbins is accused of sexual misconduct. Robbins has repeatedly denied these accusations through his lawyers and in his own reply on Medium. Elephant Journal articles represent the personal views of the authors, and can not possibly reflect Elephant Journal as a whole. Disagree with an Op-Ed or opinion? We’re happy to share your experience here.

I know you, Tony Robbins.

I see another perpetrator disguised as a helper—hiding behind your money and “unlimited power.”

While reading the Buzzfeed article on the accusations of abuse against Tony Robbins, I felt the sting of another fallen hero.

Perhaps I felt that sting so deeply because I denied my own history of sexual and emotional abuse as a child. Admittedly, I still resort to that denial more often than not. Regardless, the truth hurts. But these ongoing stories in the news of sexual abuse have brought it all back, time and again. To me, each story stung. Each perpetrator, another fallen hero, often aided by the cover up and denial of those unwilling to allow the mighty to fall.

Larry Nassar, a convicted serial child molester using his ability to heal in the worst way possible, inflicted sexual boundary violation of teenage girls in the height of their budding development.

The endless tales of Catholic priests selfishly taking what they vowed they did not need—sexual gratification—in the name of God.

The Boy Scout troop leaders, hurting innocent boys who set out to nurture and learn about our earth.

Michael Jackson, acting out the perfect storm, using his power and status to disguise each and every act of sexual violation.

Penn State’s Jerry Sandusky had groomed and abused victims for over 15 years.

And, the latest of my fallen heroes, Tony Robbins. One of the original founders of the self-help movement actively preying upon needy adults in search of help and healing. Abusing his power to control, violate, discard, and, ultimately, threaten.

There are many, many more less famous but no less damaging incidences of abuse.

I believe all the survivors. Every last one.

I understand what it takes to finally come forward because of the shame we take on. I know the challenge of speaking up, forever feeling like that victim who was given no choice, threatened both aloud and in unspoken ways. The denial we often use to cover up our story, yet it leaks out at every corner of our life. Every doubt, self-abuse, and trigger a reminder of not only the abuse, but also the fallen hero.

This is bigger than my problem. The growing incidents of #MeToo reporting, and the sheer number of the abused coming forward, speaking out, and, yes, God forbid, being believed—they all speak to the epidemic of fallen heroes. I am willing to forgive, even understand the cycle of abuse in the name of taking responsibility. But when the perpetrator denies their actions, as Tony Robbins is doing, it feels like I am being traumatized all over again.

Why do I still feel let down when reading about sexual abuse, rape, and sexual harassment? Why do I still want to believe there is good in the world, that there are people we can look up to as heroes who will do the right thing?

I refuse to give up.

Perhaps it is foolish to wish for someone who has taken the liberty to abuse, to manipulate, to inflict his own pain and shame upon another to be able to come clean. For to admit in wrongdoing, to come clean, takes courage. And to abuse is cowardly.

I write about healing, not shaming. Sometimes, yes, I must air my dirty laundry in the name of healing. As Eve Ensler writes in her latest book on her own sexual, emotional, and physical abuse, The Apology, “The story that isn’t visible, told, or owned is the one that holds the most power.” Perhaps even unlimited power, Mr. Robbins.

Come on, Tony. F*cking own up. Nobody has unlimited power. Everyone has to man up, either in this life or after. Perhaps I should never have put you on a pedestal, believed your story that reeked of remarkable healing. I was in awe of how you were so easily able to forgive, to move past your own victimhood, surviving your broken home of trauma, abuse, alcoholism, and neglect.

I believe we still need heroes, even when those we falsely put up upon that pedestal fall. We need people to look up to with hope and admiration, especially when those closest to us fail to measure up. We need to know that there are good people in the world, who do as they say and who we can model ourselves upon, especially as children.

I am not naive to think any perpetrator would man up, especially one who makes millions and has a life to lose, an image to crumble and a reputation to uphold. But to me, this is what makes one a hero. To man up takes courage. Not to live the life of the straight and narrow, but to have the courage to say “I made a mistake.” I took my own pain out on you, and I am sorry.

In 2006, James Frey, author of A Million Little Pieces, appeared on Oprah, confessing his lies about his remarkable story. He apologized. As opposed to eight years earlier, when Bill Clinton’s words reverberated on our television set, “I did not have sexual relations with that woman, Miss Lewinsky.” She was a child. You were a powerful political figure. Mr. Clinton, there is still time to man up. We shamed Monica Lewinsky, almost to the point where she took her own life. We kept you, Bill Clinton, on your pedestal.

We all have a choice—to man up or to hide.

The day before reading the story on Tony Robbins, I had spoken to my son about courage. He had failed his math test and hid the test until his teacher emailed us. I explained to my son that character is built from these small moments of courage. That we all make mistakes, but owning them is the first step. Saying we are sorry is more important than our misgivings. Heroes and cowards are not cut from the same cloth, yet both are born and raised within the walls of our homes. Both grow up and go out into the world.

I believe in heroes, not perfection.

We are human and, therefore, subject to the duality here in our world, repeating the cycle of abuse. Sometimes we wake up, often we do not. We deny and hide, hoping to just get through our day without being called out. The time is up, I believe. The silence of an untold story is as deafening to survivors of abuse as the apologies from perpetrators.

Each time a hero of mine has fallen, it stings a little less. I am a fighter. It was because of my strength, my desire to not become broken, to not repeat the cycle that I am here healing, telling my story. I am not perfect, for I have made many mistakes. And to those who I have hurt, I am sorry. I am not here to deny, but to persevere. We must all continue to tell our stories, even in the face of threats and fear, denial and revictimization.

Survivors can forgive and can heal in the face of denials, but our society will not. Our bigger problem will remain. Abuse will continue. Our heroes will continue to fall.

Perhaps it is time to see survivors as the heroes they have always been. For it can take a lifetime of courage for survivors to tell their story, a necessary prerequisite to healing their wounds. Survivors are “manning up” every day.

We all came to this life to heal, to grow, and to evolve. It is about time we do just that.

Breaking the cycle of abuse takes courage. I do believe it is possible.

I believe there is a hero in all of us. 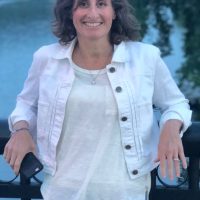