What it’s Really Like to Recover from Disordered Eating.

What it’s really like to recover from disordered eating—for me.

I must add that, because for you or for your sister or brother or best friend, I really don’t know what it will be like. Perhaps you’ll have a much easier time of it than me. Or maybe, for the person who is the reason you’re reading this, the symptoms will never fully go away. They might be the thing that has that person disappear from you, in one way or another.

But for me, it’s been a little something like this:

F*ck you. I’m fine. (Throws up her dinner, works out for three hours the next morning, skips lunch, has an entire pizza for dinner, purges again, goes out drinking.)

Okay, perhaps I do have a problem.

One day at a time was my mantra. I went some days without any symptoms—a rather clinical-sounding word that some eating disorder therapists and professionals use to describe the outward behaviors of the eating disorder. That could look like starving yourself, bingeing, obsessive thoughts about food, obsessive exercise, purging, using diet pills, looking up diet after diet online, staring at photos of thin models. They’re called symptoms because they are just that: symptoms of some larger problem.

Months in, it became One week at a time.

I was in an intensive, inpatient eating disorder recovery program with a therapist and one other girl—we were both teenagers at the time. If memory serves, it was meant to be a group therapy program, but it was just her and me. She was mostly anorexic; I was mostly bulimic. Over time, this would change.

I stopped throwing up; I was two months, three months, four months free. But my eating disorder had started when I was 13, a time when my body was, to put it politely, going f*cking crazy. So, other than feeding my eating disorder, I had never properly learned how to feed myself as a young adult.

School didn’t teach me, the media didn’t teach me, and my peers were just as confused as I was. This, you could say, was all part of the larger problem. Eating disorders are a private event; they’re personal, tailor-made for our individual traumas and reasons for coping, managing, controlling, and seeking comfort where there isn’t any. But they’re also much bigger than that, than us. Our culture is the perfect storm for disordered eating, really—our obsession with youth, beauty, social media, thinness, and the capitalist wheels that keep them spinning.

And so, consumed by the pressure, rather than learn how to eat properly, I panicked. I didn’t throw up anymore, but I didn’t eat either.

Cut to phase two of my eating disorder: anorexia.

Okay, so I can’t eat an entire pizza and throw up anymore…I’ll just stick with healthy foods.

This was how it started. I had a whole list of “trigger foods,” like you do when you’re recovering from bulimia or some variation of binge-eating disorder. These were foods I didn’t know how to eat without completely losing control, getting triggered AF, or feeling hugely remorseful afterward.

The horrible part is that this is probably true for you, too. Even if you’re not recovering from an eating disorder, chances are high that there are certain foods you just feel “guilty” about eating.

Of course, at that time, I didn’t have that wisdom or perspective. At that time, it was more important to me to be thin than it was to be healthy, or free. Because in eating disorder, you’re not free. You’re very much trapped.

I won’t go into the details of my anorexia, because like any good addict, some people might be reading this who are in recovery or in the thick of their disorder, looking for little crumbs that might be turned into a feast of advice or “best practices.”

But I will say, three years after I first sought help for bulimia, I became so thin that people were getting concerned.

I stopped having periods. I stopped sleeping well. I stopped doing much of anything. I wasn’t going out with friends, I wasn’t dating, having sex, even thinking about it, really. I was anorexic from it all.

Then, one day, somebody I hadn’t seen in years sent me a message on Facebook.

You look sick, she said. She’d been anorexic herself at one point. She knew it when she saw it. She asked if I needed help.

My F*ck you, I’m fine came up again pretty quick.

The thing they don’t tell you about eating disorders is that they’re numbing agents. It’s hard to feel through them; the world seems foggy and dull. Emotions are always just a little too far to touch.

And so for me, they came flooding back.

I’d been starving for so long, I began to work on myself in earnest. I meditated religiously, I read any spiritual or self-help book I could get my hands on, I traveled to Bali for what could only be described as a yoga retreat meets intensive group therapy meets “Survivor.” I moved to San Francisco. I moved to Asia. I moved to London.

Then, nearly 10 years after first entering treatment, I moved back home to Austin, where it all began. It was a decade of ups and downs. Of f*ck you, I’m fine(s) and Okay, I have a problem(s). I went from eating intuitively to dieting. I went from dieting to throwing up for short spans here and there—mostly when life felt too much. I’ve played the diet culture game, and I’ve broken all its rules. I felt beautiful. I felt like a project.

So, what is it really like to recover from disordered eating?

Well, for me, it has been the work of my life. It touches how I feel about other women, in relationships, in my body. It has affected my feelings of safety in the world, of control and lack thereof.

Don’t get me wrong, it has been a steady climb upward. I’m a different person than I was 10 years ago. But I’m recognizing now just how many layers there are to it—how many centuries of expectation and subjugation are piled on, how many reasons behind why we got here.

Seeing all of that—all of the work there is to do, for me, for us—and seeing how far we’ve come, I can’t help but feel hopeful. 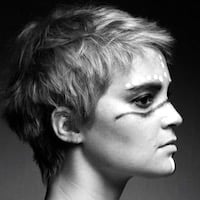