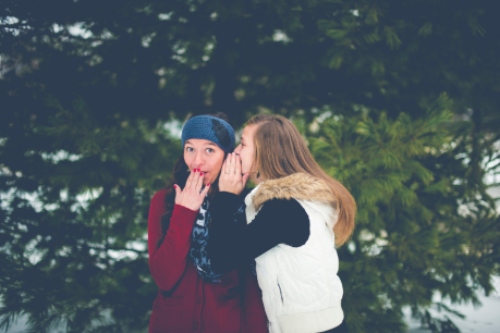 Even small acts of sharing info is damaging. If done in a way that creates negative aspects of someone perceived or assumed. Even sharing private information that is breaking confidence. It can even be just the tone of facial expression used to convey the gossip, to leave a covert message, unspoken.

It’s easy for me to go off on a rant about gossip. It’s one thing that just gets me fired up. Even the evolved form of gossip. You know the one where the person is just helping or informing another person about someone else and totally leaving their share out.

Its human warfare! It just is! It’s so much so that people have burned at the stake, committed suicide over it.  Lives uprooted and people traumatized by it. People forever changed by it.  It rarely has a positive effect.

It’s one of the most abusive, toxic, and small-minded things a human can do to damage another.  The problem is that even if there might be some truth to it; it isn’t accurate. It is one person’s perception of it through their filter, their trauma, their core beliefs, and their tunnel vision.

It’s a chain reaction that can explode, implode, and it takes the person away from their own mirror image of the actions or words of their perceived mind onto another.

It is deflection. It is an avoidance of looking at ourselves.  Some most empowering growth happens when we stop ourselves from gossiping and look at our own crap.

Have you ever recorded yourself when you forgot you were recording?  I did many years ago, and I found that it was one of the most humbling experiences I’ve had.  It wasn’t gossip, it’s just what I perceived happened in the conversation, and what really happened was different.  It happens to all of us.

What we perceive of another has very little to do with them and more to do about ourselves.  It’s true!

Have you ever noticed the chain reaction of that little tidbit of info you just shared?  It grows like mold. It’s dark, it’s toxic, and it damages and once infected, it just grows uncontrollably.  The only way to stop it is to air it out and shine a light on it. Fascinating isn’t it.

When I speak to people in developing a personal connection, they assure me they are not the gossiping type.  I wait and just see how things unfold. I listen. Usually, if it is there, it will show up. In some form or another.  I’ve seen it show up in personal development groups, new age meditation groups, yoga classes, and even in the professional groups. The very places you would think they would be above it.  It’s almost like a systemic behavior that most people cannot control. It’s the virus that has been affecting everyone that can’t be cured.

It can feel good.  It actually might feel like you did a good deed.  You informed someone of something you feel is right about another person, to protect them. It can feel like a relief.

It’s a hobby or a pastime and has been for centuries. Even in the 21st century, we cannot get a grip on the devastation that occurs because of idle talk or even conscious gossip.

I’m looking at this poster of Christians apologizing for shaming and judging LGBTQ people and I’m reminded of the trauma and discriminations I’ve encountered because of gossip.

It’s destroyed countless lives, children, parents, loved ones. It continues to do so even in the supposed most evolved communities and groups. It knows no social status, race, sexual orientation, disability, or age. It’s fast and furious.

I’ve not met a person that has ever come to me and admitted they gossiped about me.  People do not want to admit it. No matter what they cannot show up and accept responsibility for it.

Therefore this poster of an apology is huge.  It’s a wonderful example of what can happen when we admit we did something damaging to someone else. Healing occurs. Inclusion occurs and a new community can be born.

If you cannot admit you did it, you will forever be imprisoned by what you did.  You’ll always be hiding the truth of what your tainted perception of someone might have done or done to the person or group of people.

I find it heartwarming that a Christian group would go to such a public display of acknowledgment of their actions.  It’s fantastic. What an outstanding example they are setting. It brought tears!

Whatever name you want to give it, it’s still sharing your unquestioned mind’s stories with others about someone else that has nothing to do with them and everything to do about you.

Many will never know the damage their lack of emotional self-control created.  It’s a choice. It’s a virus that can stop. It can save lives. What if for every time you wanted to gossip you complimented the person instead?  Imagine a world with no gossip!

Photo: by Ben White on Unsplash