I saw them first before I saw him: two willowy, beautiful teenagers full of life and bravado, and one skinny, shy girl with a gentle smile.

They tumbled out of the truck like overexcited puppies, running around with the boundless energy of the young and shrieking with laughter.

Then their father appeared, and I forgot about the three girls. His blue eyes met mine, and the world around us stopped.

At 22, I was convinced that love conquers everything, so I dropped out of university, dropped out of my life in Germany, and moved to Canada to be with him.

But now it wasn’t just the two of us anymore.

There were the willowy teenagers, the skinny girl, and a fourth one, small and spunky and irresistible. We had talked about them while we were in Spain, holding hands across the table by candlelight, and he had described their personalities, their likes and dislikes, and showed me photos of them proudly. His obvious affection for his daughters made him all the more attractive to me, and I dreamed of a ready-made family just waiting for me.

The dream was delicious, tinted in golden colors, soft around the edges, and with the fuzziness of a photo out of focus.

But reality is not fuzzy—there is no golden light and the edges are sharp and cutting.

I was scared of children and terrified of teenagers. And these children and teenagers had every reason to hate me, the thief of their father. The teenagers talked fast, too fast for my beginner’s English, and I didn’t know if what they were saying was friendly or menacing. The children were sweet and guileless as only children can be. They treated me at first like a friend of their father, and soon like a friend of theirs, and I was so grateful I could have wept.

I did weep during the first year, often, because this love was so much more complicated than my golden, fuzzy-edged dream. The father and I were getting to know each other in front of his daughters. After less than a month of courtship I had become an instant third parent, and now our relationship had to grow in front of witnesses. I wanted them to love me almost as much as I wanted him to love me. Of his love I was growing more certain with each passing day; their love was more elusive. The little ones and I grew closer; the teenagers remained an enigma.

After two years together, we got married. It was a small, almost secretive ceremony in Germany without the daughters or any of our mutual friends in attendance, just close family and two college friends of mine. I didn’t wear a white dress; there was no dancing. The wedding was a somber affair, but our love wasn’t, and we were both ecstatic that we had made it this far.

“We will have a real wedding at home,” we told each other, and I dreamed of having four bridesmaids with his smile.

The father and I grew even closer once we were married.

The younger daughters and I established a relationship of mutual respect and friendship. I was too young and inexperienced to be a mother, and they didn’t need a second one. But we were friends.

The teenagers were more comfortable with me now. They introduced me to their friends as their stepmother, a gesture that made me pathetically grateful. Ours wasn’t a relationship of equals; it was one where all the power was firmly in their court. They didn’t need me; I needed them and their approval.

While their father’s and my courtship had lasted a spectacularly short amount of time, I would be courting the teenagers for years. I agonized over Christmas and birthday presents, wanting to find the perfect gift for them. My usual way of showing my love was with words and touch, but words continued to fail me, so I wanted to convey my affection with gifts. I was trying too hard, and didn’t seem to get it quite right most of the time. Christmas turned into a high-stress affair frayed with disappointment, turning it from a formerly beloved time of year into the most dreaded one.

I wasn’t their mother, but I loved them like one.

There were nights out with the teenagers that made me feel awkward, but loved. There were acts of incredible kindness. Sometimes, there was silence.

I wasn’t their mother, and I wasn’t quite their friend; I couldn’t find the words for what we had.

The younger daughters and I were a team. We went swimming and on bike rides, we spent hours on the trampoline, we baked cookies and watched cartoons. They taught me English; I taught them how to knit. We drew together and went horseback riding; they went grocery shopping with me and never pouted when I wouldn’t buy them the candy they wanted. We held our breath in every tunnel we drove through and made s’mores around the campfire.

They stayed with me for weeks when their father had to go to Germany to look after his father when he had a stroke. The skinny one, now long-legged and strong and kind, once caught an escaped llama that I couldn’t catch by leaping at its long neck and hanging on for dear life. All animals trusted her, and babies adored her.

The small and spunky one, now older but as spunky and irresistible as always, would follow me around all day, recounting in great detail everything that was going on in her life.

The young women left home and started living on their own. The children-turned-teenagers were easy for being teenagers. There were tears and laughter, first boyfriends and heartbreak, there were piercings and shopping trips.

There were fights between some of the daughters and their father that had me sobbing in the bathtub, wanting to fix it but not knowing how. There were reconciliations that made me weak with relief and so afraid it may happen again that I tiptoed around them, trying hard to keep the peace.

And then they all grew up. They drove cars, they had jobs, they lived in their own places with pets and boyfriends and husbands, and they turned into adults with their own values and beliefs.

Some of the daughters were not very much like me, and that was okay. When they started living their own lives, I started living mine. My need for their approval lessened and it felt like a burden was lifted off my shoulders. I felt free.

The father and I had more time for each other now. We entered the phase in our marriage that usually comes before children: romantic dinners for two, going out, making plans for the future. I loved spending time just with him. I still occasionally dreamed of lively family dinners with all the daughters and their significant others, lighthearted banter flying around the large dinner table.

But I enjoyed the small dinners with just my husband and I. They were quiet. There was no stress before, during, or after. I started liking Christmas again.

When you are young and in love, you believe anything is possible. The wonderful thing is that by believing that, it becomes true. I got to experience motherhood, something I never expected I would. It was as hard as everybody says, but it was also as rewarding.

Love knows no boundaries. It is bigger and stronger than we could ever imagine. It is also scary as hell.

But opening ourselves up to love, letting it into our lives, and committing to being vulnerable will take us on the wildest ride of our lives.

I was looking for romantic love, but what I found in the process was so much more: motherhood, an inner strength I didn’t know I possessed, and the ultimate: family. Like I said: a life beyond my wildest dreams. 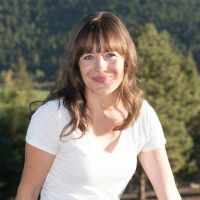 Miriam Verheyden is an author, blogger, and word enthusiast. After what feels like a lifetime of being afraid, she finally decided to hell with fear, and embarked upon a life … Read full bio