The Secret to being the Best Dad in the World.

I have to admit I was rather surprised when my daughter exclaimed that phrase.

You see, I hadn’t really done anything spectacular in my estimation to make her day really that special. I was pushing her on the swing.

Maybe it was the fact that my nose wasn’t in my cell phone and I wasn’t daydreaming about what I wanted to accomplish that allowed me to push with a little more enthusiasm. Regardless, I’ll never forget that ear-to-ear grin and that sweetest of exclamations.

I had another kind of dad-awakening moment a few months back.

It was a Sunday afternoon and the rest of the family was perfecting the art of the Sunday afternoon. My daughter asked if I would take her to Dairy Queen and seemed somewhat surprised when I immediately answered “Sure. Why not?” We took the five-minute drive up to the local Dairy Queen, and I sat across from her and watched her face light up in a way that only a Mr. Misty Slush can do. We talked and laughed while sharing each other’s sugary treats, then we headed back home.

I never thought for a minute that I had done anything really extraordinary.

A couple of days later, a friend of mine whose wife watches our kids a couple days a week asked me if I knew what an impact I had made on my daughter’s life. A little perplexed, I ask him what he meant. “Well, the other day, Avery couldn’t stop talking about her trip to Dairy Queen with her dad,” he said. “She told all the other kids. And she told my wife at least 10 times.”

This is when something clicked for me.

I realize that quickly approaching 40, I’ve lost my sense of wonder. The kind of wonder I used to have when being pushed on the swing or going to Dairy Queen with my dad. There was a time when those things were pure magic. Like flying a kite, being pulled by Puff the Magic Dragon kind of awesomeness. Sadly, these things have turned into the humdrum of the day-to-day as I have aged.

As dads, we are constantly bombarded by the things that we should be. Whether it’s the Gillette commercial with the perfectly sculpted male figure adored by his fans and supermodel girlfriend. Or it’s the investment report we received in the mail telling us where we should be at our age and reminding us how far behind we are.

It seems like there’s a lot of pressure on men to be and do more and more. Add to this the dads on Facebook posting pictures of their unbelievably awesome trips to Hawaii with their kids (not that there’s anything wrong with this). It just seems like it’s hard to measure up in the dad department at times.

These two experiences, her being pushed in the swing and her complete elation at being taken out for ice cream with her dad, helped me realize that it really is just the simple things.

More than anything, it’s just about being there, listening to the things that they want and then taking the time to respond.

It didn’t take that much time, money, or effort to push her in a swing or take her to the Dairy Queen. But for her, it was everything at the time.

If we really want to make an impact, we have to recapture that sense of wonder many of us have lost. The sense of wonder that transformed a push on a swing or trip to the Dairy Queen with her dad into a grand adventure never to be forgotten.

When it comes to making an impact, making a difference, and giving our kids the type of memories that they will always recall fondly, so much of it is just being present. Being in the moment. Putting the cell phone down, putting the worries down that we are faced with every day…and focusing. Focus on the little girl or the little boy in front of you, yearning for your attention.

So the next time one of your little ones asks you to push them on the swing or run to DQ for an ice cream, say yes, and be in the moment with them. You never know. We just might make it one of “the best days of their lives.” 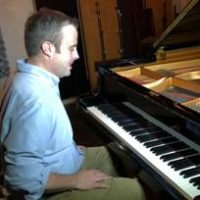 Sheldon Pickering is a composer/performer who strives to convey peace, joy, and inspiration though the music he creates and shares. He was asked by a studio engineer what he w… Read full bio