Happy Birthday, J.K. Rowling! Here’s to Over 20 Years Of Creating Connection by Helping Us All Remove Our Masks

I’m working at a big children’s publishing house and I really don’t think I’m qualified to promote children’s books because I have never done it before. So I’m pretty much faking it on a daily basis, wearing the mask of having it all together, and feeling queasy on my way into the office every day about my potential to succeed, but never letting them see me sweat.

Now it’s the 90’s during a time when it isn’t cool for little boys to read, or for big boys to promote children’s books. It would have been way cooler to do publicity for ESPN…if I was like other men in PR and if I was even vaguely interested in sports. On top of that, I also feel like a fraud because unlike most everyone I work with, I have no kids. So I don’t feel connected to our audience. I can’t talk about what my kids thought about the books, or what their friends are thinking, because I don’t know.

The closest thing to kids I had, were dogs, who were family but they didn’t read books.

I had worked in PR agencies for over a decade and even worked my way up to some big communications jobs in network television, so I was no stranger to publicity.  Nor was I a stranger to rejection, having failed miserably at my previous corporate job, unceremoniously and embarrassingly fired, and still praying that I would not relive that nightmare. Even with years having passed my post-traumatic network TV stress syndrome was pervasive.

And in a moment, everything seemed to change…

A unique children’s book falls into my lap. I am told by the publisher in no uncertain terms that I am responsible for turning the book into a phenomenal best seller to break all records in a market that had never heard of it. No big deal.

This came after it was first promoted in the UK by a publisher who insisted that the author make herself less feminine so little boys wouldn’t know they were reading a book written by a woman. This resulted in said author wearing her own mask by abbreviating her first and middle names.

That makes two of us wearing masks…Her pretending to be less feminine and me pretending I am good at this.

Since my job sort of depended on it, adopt a “fake it till you make it” attitude as I smile at my boss and accept the project, not as though I had a choice. It is the first children’s book we promoted that I actually read (outside of picture books and pop up books, which I don’t think actually count). And you may have guessed by the name of this talk, that book was Harry Potter.

Once I read the book, I really connect with the idea and the message it is sending. And as a leader of the team that is responsible for promoting it, I know if it is going to be a success I need to believe in what I am doing. And more importantly, I need to believe in myself.

Do you ever find those books that keep you up all night?

I stayed up all night reading the first book, Harry Potter and the Sorcerer’s Stone,  I couldn’t put it down.

My inner child and imagination were ignited with new sense of awe, and a, well, a belief in magic. I was sent back in time, to my own childhood, recalling my love of books like Charlie and the Chocolate Factory, The Phantom Tollbooth, and the Hardy Boys. I didn’t need kids in order to feel connected to the parents or children reading the book, because I was once a child, too.

Belief in the magic wasn’t the only thing we needed as a team of early adopters of this idea. We put together a 10 point publicity strategy and went to work, which quickly brought resistance. Even Oprah turned us down.   We were rejected frequently, and it stung especially because we wanted everyone to love the books as much as we did. That’s why it hurt so much because we were so passionate.

We had to pivot and we eventually found a reporter who was Wicken to promote this book to her audience at National Public Radio.  Wicken, for those of you who don’t know, is Pagan Witchcraft,  a contemporary new religious movement. For real!

And the press started to pay attention!

We started a movement of connecting people, the old-fashioned way, in person.  It was before social media existed, before texting was popular, before the iPhone. It was a time when people went to book signings, met the author in person, stood in line together to see the movie 6 times because they loved it so much rather than having a Netflix marathon all weekend long on their couches alone. That was how the movement was created: people talking to people  in the town square, and connecting on an idea.

When I think about J.K. Rowling, and the impact she has had on our world, I am transported back to the early days of touring the country with her and being by her side as she shook hands and connected with her readers and gazing into the eyes of her adoring fans at midnight book parties, kids whose lives were changed through their connection with those books.

We all have those friends who we haven’t seen in a while, and then when we know when we reconnect it will feel like no time has passed. That’s the kind of relationship I like to think I have with her today,

What Harry Potter taught us about connection was: it didn’t matter what color someone’s skin was, what his or her religion was, how old they were  (adults and children loved the books), what their sexual orientation was, or if they were popular in school.

The process of connection starts with self-acceptance because only then can we remove the mask to see and be seen, to hear and be heard.  There is a huge risk, and even bigger reward to allow yourself to be seen for who you really are. That’s the work and it’s hard to risk being rejected, being vulnerable, and to be seen as the boy who reads books when no other boys were reading or the person promoting a children’s book who doesn’t have children.

We all wear a mask  – of insecurity, having it all together, perfectionism?

And our masks are not only worn on Halloween. They are worn at work when we are up for promotion, in our relationships when we want to be worthy of love, at school when we want our teachers or parents to be proud of us, in our friendships when your friend tells you “You look great in that dress,” even though you don’t, and she is afraid to tell you the truth.

What is the mask that you wear? How ready are you to drop it, to risk connection? 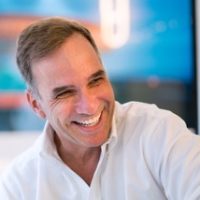