Why I’m all in for Beto.

follow
Waylon Lewis 721 Followers
Facebook Twitter
11.5k
95
598 Share on Facebook Share on Twitter Link:
15
We are living in an imperfect, justly proud, ever-improving democracy…that has been hijacked by a man and cowardly complicity party who do not respect democracy—we are rapidly becoming, overtly now, an evil country.
I don’t say that lightly. I don’t say that as a partisan.
We need a President who will not only be “right”—kind, caring, wise, peaceful—but who can offer a path for all Americans to come back together. Among the Democratic candidates, Beto is uniquely appealing from this point of view. Others are strong and capable but somewhat too us vs. them for this moment.
We’re stuck with each other, whether we like it or not—not only as Americans, but as citizens in this precious life on this fragile planet.

Yes, we are the baddies right now.

“Trump administration ‘to announce plan to hold migrant children indefinitely in detention camps’ – US government also says it will not vaccinate detained families ahead of flu season.”

And no, we don’t have to be—but as Beto said yesterday, it’s not enough “not to be into” what’s going on right now. We have to actively be against it, without aggression, but with exertion, without laziness or escapism, and with fierce caring.

He’s so honest–and yet so inspiring. As opposed to what we have now: so dishonest, and so angry and depressing. 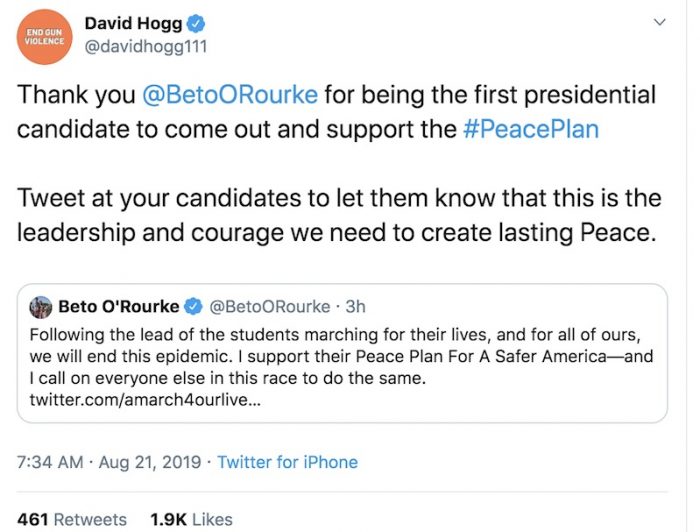 Want to stop illegal immigration most effectively? Prosecute the employers of illegal immigrants, first–you’ll discourage dozens or hundreds or thousands for every single case, instead of just one.

PS: Donald Trump employs illegal immigrants, and always has.
PPS: It ain’t partisan to say so. It’s hypocritical not to call it out.

It ain’t hype to say the above. It’s silly not to call it out, as this guy just did. (see below video, if you haven’t yet).

90% of Americans support background checks for all gun sales. It's time to act, or see this violence continue.⁠

But honestly I’d vote for a Republican if they supported our environment, as the GOP used to, and they supported equal rights—from a conservative point of view, we shouldn’t want the State interfering in individual rights to marry, vote, earn a fair paycheck…

Given that no Republican seems interested in health care, equality, our environment…I vote liberal. That said, I respected McCain greatly, if not his campaign. And it’s important to me to be respectful to those I disagree with—unless, as James Baldwin noted, their view undermines someone’s right to exist.

All that said, I’ve donated to three candidates, thus far. I find it very important—as a journalist, as a democracy-lover, as an American—to get rid of this Nationalist, despotic sickness that is laying carnage to our country and tearing apart the fabric of our already frayed, but once more hopeful, society.

I’ve donated to Warren. It’s time for this great country (great in our excess, great in our potential, great in our sins, and great in our accomplishments) to see a woman at the helm. And, she’s probably the smartest, most prepared candidate you could ever ask for.

I’ve donated, finally, and many times, to Beto. All three candidates are only taking money ethically—unlike, say, Trump or some others on the Democratic side. But here’s why I see Beto as the right choice for America, now, in 2020:

My two favorite things about Beto are:

1) strategically, you flip Texas and there’s no path to victory for President Trump, even if he won the other so-called battleground states.

2) Beto’s powerfully empathetic, positive, hopeful—a good counterstrategy to all those citizens sick of the “carnage”-rivening Trump message of fear and division and hate. And he’s shown he’s not wimpy in his goodness. In fact, he’s as if not more comfortable than any other candidate pointedly speaking truth to despotism.

3) Okay. One more: he’s a moderate, and a progressive, both. He’s a uniter. He will, given the opportunity, actually bring this divided country together—I love Warren and Sanders, but they’re not uniters, particularly.

REPORTER: “Does it bother you when Trump bad mouths you on Twitter?”

BETO: “When Trump is bad mouthing me, he’s leaving somebody else alone.”

Updates above and below–original text below.

Here’s the recent Pod Saves America–Beto’s reply after “I don’t know” with about 10 minutes left made my day/week/year.

“Donald Trump has dumbed down our politics, diminishing the discourse to the point where a cry at a rally or a tweet passes for a statement of principle. This is the political game that Trump has chosen to play. And he has played it well enough to dominate the debate for four long years.

But he is getting beaten this week by a better man. Beto O’Rourke is not going low in the way that Trump does. He is bringing more nuance, insight, and honest emotion to the dialogue. But he is waging the debate on all the platforms that Trump uses. And O’Rourke is winning.

After a horrific mass shooting that left 22 men, women, and children dead in El Paso, killed by a white man who targeted Latinos and whose “manifesto” echoed Trump’s anti-immigrant hate speech, O’Rourke responded not as a 2020 presidential contender (or as the Senate candidate some would like him to be) but as a passionate son of his hometown.

Still think he should run for Senate again, instead? Read this first, and last.

Correction: Sean was a shopper, not an employee.

An emotional moment: Beto O’Rourke meets Sean Nixon, 20, a Walmart employee who was there at the time of the shooting and helped a child.

O’Rourke asked if he was getting counseling, offered his personal cell number and said to call if he needs help. pic.twitter.com/GryDGQJWeD

Here’s President Obama’s statement on the shootings. A bit different in tone and content than our present President, hey? It’ll remind you of what’s real, and what’s best, both, about our fellow citizens and this troubled country.

“Until all of us stand up and insist on holding public officials accountable for changing our gun laws, these tragedies will keep happening.” ~ President Barack Obama

Until all of us stand up and insist on holding public officials accountable for changing our gun laws, these tragedies will keep happening: https://t.co/reTnmcg3xo

REPORTER: “Does it bother you when Trump bad mouths you on Twitter?”

BETO: “When Trump is bad mouthing me, he’s leaving somebody else alone.”

Moments ago on @DeadlineWH:

.@jacobsoboroff: "Is the president a white supremacist?"
Beto O'Rourke: "He is."pic.twitter.com/zZZNQRnRox 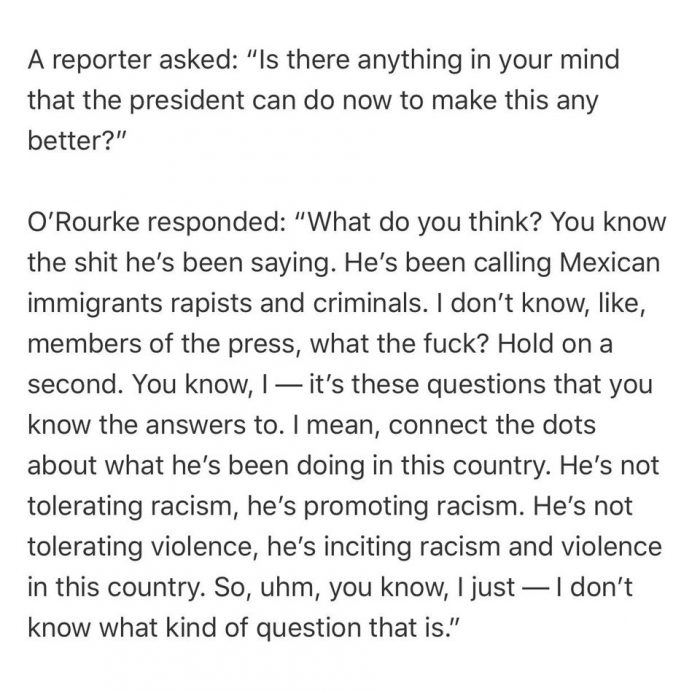 On the issue of gun violence after El Paso mass shooting attack: “I think we need to focus more on memorials before we start the politics.” ~ Republican Texas Gov. Abbott

“Yes…we’ve had a rise in hate crimes every one of the last three years… he is a racist, and he stokes racism in this country … and it leads to violence.” ~ asked about President Trump’s rhetoric in relation to the El Paso mass shooting attack, El Pasoan and Democratic presidential candidate Beto O’Rourke

Donald Trump is a racist. Any president’s words have power. Thoughts and prayers won’t cut it. Don’t make the shooter famous. Fund mental health and commonsense gun safety solutions supported by 90% of Americans.

“Love this. Reporter asks Beto about what Trump can do to help. Beto’s response: “WTF?” Two Adults comment on the recent Shootings.

Of course he's a racist. He's been racist from day one—before day one—when he was questioning whether Barack Obama was born in the US. He's trafficked in this stuff from the very beginning.

Watch the video: “I’m not sure the point you’re trying to make, Jake:”

I watched this in real time and was blown away by @BetoORourke refusal to do a political dance in this interview. He's speaking truth in light of a massive threat. And that's what leadership looks like. https://t.co/JnZesq9obD

Jake Tapper just asked @BetoORourke would it be different for Congress if the shooters were muslims. Beto said "I don't want do hypotheticals or even insinuate 'iF thEY wEre MuSLIms' scenarios. This was a white Male racist & let's stick with facts." ??????Not today. Stay focused.

To be fair to Jake Tapper, he was trying to make the point…well, watch the full bit here if so inspired:

If you watch one thing:

Beto chokes back tears, cutting campaign trip short and heading back to El Paso after shooting.

Instead of golfing today, come back to Washington. Tell Mitch McConnell to bring the Senate back into session to pass H.R.8 and H.R.1112 (both of which the House already passed) so that someone has to pass a background check before they get a gun.

It’s not “fueling the divide” to call our those who foment racism, sexism, bigotry, division. https://t.co/3kFAv5StlI

Actually, assigning responsibility and finding solutions does save life. https://t.co/9iL1y4e07K

Thank you @BetoORourke for already committing to our and @GiffordsCourage’s forum on gun violence for 2020 pres. candidates!

Calling all other candidates: can you commit to being part of the solution and be there in Las Vegas on October 2nd?https://t.co/qKqfMCe6j5

90% of Americans support background checks for all gun sales. It’s time to act, or see this violence continue.