Turning your Panic into Power.

My first round with the beast of panic left me in the corner of the ring, curled up and prepared for death on the 7th of November, 2005.

I stayed in that corner and accepted the thrashings of my unseen assailant until 2008. And although I have progressed miles from that in the years that have followed, the memory of the terror seems forever stitched into the skin that I live in. As the days creep closer, I will find myself peeking under the bed for the monster. It’s part of this disorder that defies human logic at all turns.

First, let me tell you who I am. I’m an inspirational speaker and unintentional comedian traveling all over Canada. I’m followed on social media for my “wise” and provocative thought process. I use the term wise cautiously as quite often, wisdom is grown in the soil of ridiculously asinine choices made in the youth of each individual’s life journey. I’m not sure what provocative means exactly, but have had several people reference me as such and at 54 years of age that’s about as close to sexy as I will ever get again so I am absolutely using that to my advantage.

And now let me tell you more about who I am now.

I am an expert in Panic Disorder. You can ask me to provide qualifications to that effect and I will offer you absolutely nothing from an educational perspective; in fact, I will assure you that there is no text on this planet nor a lecturer in any institution that can rival my expertise. With the exception, of course, that said lecturer has panic disorder also. I have to take that option into consideration, I suppose. If you happen to be said lecturer reading my words today, I raise my midnight coffee to you in cheers of our kinship. Yes, you read that right. It is midnight and I am enjoying a piping hot cup of java. I can hear my doctor now “Oh my God don’t drink that! Coffee is bad for your condition.”

But, so is standing on a stage facing 100 eager faces waiting on your provocative (there it is again) commentary.

But here I am doing it anyway. Pretty impressive when you consider that prior to my monster moving in under the bed, I was seriously socially disabled. An introvert of massive proportion, so shy that I couldn’t even eat in public let alone grab a mic and conquer a stage! So please don’t assume that my sojourn into panic was a simple respite from the limelight. It was, in fact, the springboard that propelled me there. As strange as that seems. I still scratch my head about that.

I’ve been where you might be right now. I have stared down paper bags believing that the sound of the crumpling inflation might be the last sound I ever heard again in this lifetime. I should point out and perhaps to the chagrin of whatever professional will argue the fact, that focusing on gaining control of your breathing is an absolutely insane way to ultimately just pass out. I have learned that my body knows exactly how to breathe without my assistance. Blowing into a lunch bag only serves to promote the belief that you can’t breathe. Just saying. And again, this is personal experience.

I have also been glued to the seat of my vehicle with two inoperable legs staring at the convenience store wondering how the hell I am going to get the milk that I need to just float off the store shelf and out the door without my having to get involved. I have abandoned full shopping carts at the cash register when the tunnel vision struck and nothing around me looked familiar, forcing the flight response to kick in as I would run for the nearest door to find the airflow that was no longer circulating in my environment.

I understand you. I am you. I know you. I have seen you on the airplanes fidgeting, with your pupils fully dilated, because the experience is overwhelming you, suffocating you. I know with certainty that your oxygen saturation levels have reached 100 percent because I see you pulling on your fingers and tapping your feet on the floor because they have fallen numb; your body responding to an invisible threat is pulling your oxygen to your vital organs instead. Those that have experienced true and terrifying panic responses will understand what I am sharing. For those that have not, I ask you to be grateful for that. To those that I see on the plane, I applaud you for sitting it through. I am right there with ya buddy.

There is nothing as defeating, as disabling, and as destructive than something of which you cannot control. And for a control freak that is an awful place to live. So what do you do with that?

Simple. You let go of the need to control. Voilà. I make it sound remarkably easy but let me assure you that it is a daily and ongoing process and there is nothing simple about that.

The panic response is built in our need to control external influences, emotions, traumas, or simply life in general. The panic response is a powerful reminder that we have absolutely no control whatsoever so I challenge you to just go along with that the next time you find yourself bolting for the door.

It was my husband, in fact, who snapped me to that realization one day in 2008. I had just entered a mall when the “fishbowl” effect took over. I call it the fishbowl because when it comes over you it’s akin to someone suddenly slamming an uncleaned and foggy fishbowl firmly down over your head. Your world blurs out and you rush for something that looks normal. On this particular day, I turned to run. My husband reached his rather long arm out and grabbed my own in a fierce and protective hold that I was unable to get free of. To anyone watching, I looked like the proverbial deer caught in the headlights of a fast-moving transport truck. I wanted to beat him to death but I was too busy wondering how long it might take to chew his arm off if need be and simply run away with it. I will never forget his eyes as they locked my deer expression. Or his words.

I just simply stood in. And I lived through it. Surprise surprise—I survived it. That was an epic moment. And every moment since that moment I have stood in.

And with every stand in, the episodes decreased in severity, decreased in how often until they virtually stopped trying to control my world.

Do I still get them? Of course I do. But I have learned to harness the power into something manageable. Imagine for one moment how it feels when you have your own panic response. It feels as if there is nothing in the world that can stop what is happening. Now if that is not the epitome of true strength then I don’t know what is.

But I want you to remember, that this is your own strength fighting back at your need to control it. So how about you work with it instead? How about you stand in it? You feel it. You honor it. You stop trying to tell it how to breathe. And use it to become the best version of what you were intended to become. You may not intend to suddenly find yourself and your voice on a stage such as I did, but you are meant for something bigger than the fear of what is stopping you from getting there.

You got this. I have faith in that.

Postscript: I carry a bottle of muscle relaxers with me like a Linus blanket. Other than that small security I have used no other medical means to fight back at the monster under the bed. Instead, I learned to dance with the monster and I am a much better dancer than he ever expected.

You are too. You just need to learn the steps. Stay powerful. Stay one step ahead. Stay provocative.  Cha-Cha-Cha 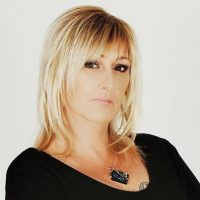