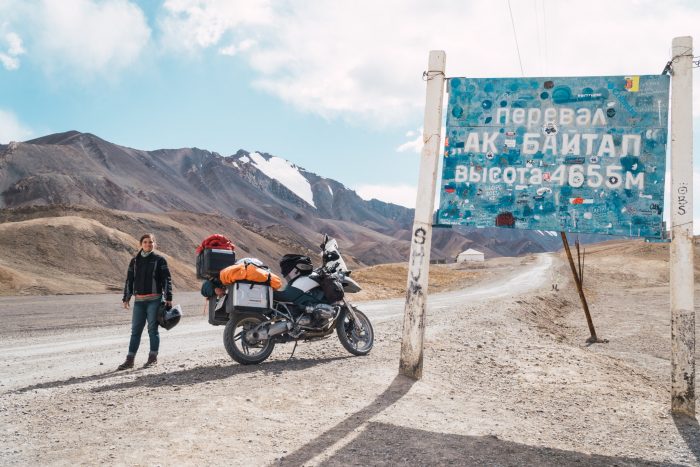 After a few months of preparing, but still no plan rigidly in place, we headed east. The plan was to get to Bishkek, Kyrgyzstan.

Losing my way wasn’t even on my list of things to worry about. As the passenger on this adventure, I’d just sit back and enjoy the ride.

From within my helmet, I’d watch the world go by and taking in every moment of this experience.

But along the way, from the back of the bike, I lost my footing. I didn’t get lost from my partner, the bike, or the road we drove along. I lost my way inward. The connection within that usually keeps me rooted, gives me balance, and allows me to bloom got cut off.

My partner had always dreamt of doing a motorcycle trip around the world. I often laughed at him, saying that he only wanted to date me so that I could push that dream forward. Having traveled a lot before, I felt comfortable embarking on adventures. So when we finally started talking about the logistics, I was excited.

Having thrown around different ideas of routes, destinations, and formats, we settled on going to Kyrgyzstan. This route would fulfill a lot of our requirements: cheap, not too much tourism, plenty of mountains and cultures we were keen to explore.

I had originally been nervous about a few things.

Going on such a long motorcycle trip. Having spent a total of less than 500 km on the back of the bike, this 15,000 km trip seemed like a big jump.

I worried about feeling exhausted by the format of the trip. I had already discovered years ago that I loved to travel when I could go slow, connect with people, get to understand a culture. But the style of this trip would be the opposite of that.

We had thrown around the idea of me choosing a few cities along the route where I’d stay put and my partner would meet up with me along the way. But as we chatted about it more, I decided to ditch that idea and commit to this moto’ journey.

As a natural adventurer, I was excited about the learnings, struggles, and beauty a trip like this could offer.

As we hit the road, I had a clear idea of what I wanted the focus of these next five months to be. With mindfulness and conscious living having become major factors in my life, I wanted to bring these things along. I wanted to be present with the adventure we were living and take in every experience that we encountered.

I was keen to take in all the sights, sounds, smells, and tastes, as well as the thoughts, feelings, and inner realities that arose.

With so much time in my helmet, I had plenty of space to make this plan a reality.

I felt the wind, saw the ladies working in the fields, the densely green landscapes, felt the rain…

I noticed my excitement, my boredom, my confusion, my exhaustion, and all the other emotions as they came up.

I would notice them, allow them to exist, then notice their departure.

None of these things were permanent. Not the boredom, not the rain, not even the super green surroundings.

Lost Near the Caspian Sea

Unexpectedly, somewhere near the Caspian Sea, I lost my way.

I had stopped meditating. I hadn’t done yoga in weeks. And I wasn’t making room for much of my own time.

I was tired. The constant movement felt draining. And I felt overstimulated.

My soul couldn’t keep up with the speed of the bike.

I felt like a sponge filled with water but that just kept trying to take more in. But I couldn’t figure out how to wring out the water to take in new experiences. Even when we stopped for days at a time, I’d rest, empty my water tray, but as soon as we were back on the road, I’d get instantly filled up again.

We often spoke of taking a bit of time apart. Life on the road as a couple can be tough. And being someone who requires a serious amount of personal space and time to feel good, I was dangerously depleted of my own space.

But I kept moving without prioritizing my self-care.

“Maybe if we just make sure we have our own time when we stop in places, it’ll be enough.”

I knew I needed more of my own space, but I didn’t have the strength or clarity to make it a priority.

At home, I have no doubt that I would have been able to see what was happening, but I was blinded by the overstimulation of the trip.

So we kept moving forward. Going through one country after another. Crossing border after border. Changing languages, currencies, customs, and landscapes regularly.

I kept feeling more disconnected from myself, but I just couldn’t figure out what to do.

I kept practicing mindfulness in my helmet, but contrary to what I expected, I just felt swamped by my inner chatter and exhaustion that I felt.

I know people don’t often speak of their travels this way, but this is what I was living.

There was good stuff too. We saw incredibly beautiful sights, the most majestic peaks and vast desert landscape I could ever have imagined, and the warmth of the folks we met along the way made me feel more connected with humanity than I had in a long time. But those positive aspects were only a part of the reality that I was living.

We tried to empty my sponge by stopping for days at a time, finding western food and social hostels with tones of foreigners where I might be able to find a sense of regularness.

And although it would work for a bit, the constant overdose of new experiences combined with a complete disregard for my inner self-care would eventually catch up and drown me again.

One day in Karakol, a small mountain town beside a huge lake in the north of Kyrgyzstan, I met David. After months of feeling disconnected, I felt jolted by our conversation about yoga, meditation, spirituality, connection, and life on the road. He’d been traveling for years, and recently finished up his yoga teacher training. We chatted in a way that my soul had been craving.

He offered to give me a yoga class in the hostel’s garden. Although Jose and I had planned to leave after breakfast, I knew I needed to stay for this.

I finally went inside myself. For the first time in months, I felt the emotions that I had been rejecting. I felt the frustration, the disappointment, and the guilt for not having been able to keep a better hold of my feelings.

Having recently done courses in coaching, managing emotions, and mindfulness, I was mad at myself for not being immune to these dark feelings. I had rejected them, denied them the space they needed to be released. And that only made them worse.

As I moved through Downward Dogs and Cobras, focusing on my breath, I felt all the emotions that I had been hiding away from. All the disconnection caused by not allowing myself to experience what was inside me.

As we finished with Shavasana, the final resting Corpse pose, I got up, looked at David, and cried.

He just hugged me. Somehow, he knew what was going on. I didn’t need to tell him.

I had lost my way, and this yoga class allowed me to turn the lights back on so that I could find my way back again. Having not had anyone to guide me back to where I could find stable footing, I had just kept walking in the dark. I had gotten more and more lost by being more and more disconnected from myself.

One simple yoga class allowed me to see what I hadn’t been able to see.

I needed to not just be aware of what I was experiencing, but also accept whatever it was that was appearing from that experience.

I needed to accept my feelings, accept the struggles of the trip, except that it wouldn’t all go how I had planned. I needed to let go of my expectations and allow things to just be as they are.

Josée Perron is a Mindful Travel and Expat Coach on You Choose the Way. Through yoga, meditation, retreats, coaching sessions, and her writing, Jo loves to help travelers and… Read full bio

Living Consciously: The Power to Choose How We React in Any Situation. ~ Rebecca L. Norrington 7 Hardcore life lessons Travel teaches Faster. Enough is Enough: how to Prioritize Self-Care when we’ve Forgotten our Worth.
See relevant Elephant Video