Girl on Girl: the Painful Practice of Women Holding Down Women. 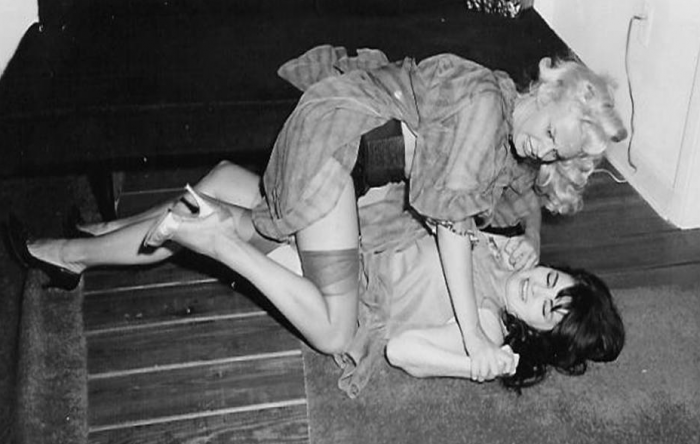 We are raped, abused, neglected, victimized, discriminated against, and passed over for promotions.

And yet, the most painful wound women still have bleeding isn’t caused by men, this particularly painful festering wound is caused by something far more surprising—the brutality of women holding women down.

It seems now trendy to hail to the call of women rising up, howling at the moon signaling a cry for the great rise of the goddess, and return of the feminine.

And while it feels instinctual to band together as self-proclaimed wild women reclaiming our power, the ugly truth lying beneath our halo is still mean girl-style survival. Things haven’t really changed since high school, they’re simply hidden under the cloak of a more polished girl power.

Men throw punches, make political moves inside corporations, and publicly insult one another, but in the end, they are members of the stone solid boys club. Liking one another or not, when faced with adversity, they stand together. We’ve all witnessed it—a woman cries foul in a corporate or fraternal group and boys band together regardless of who likes who.

But some women will attack one another instead of rising together.

There’s nothing more deadly than this woman on woman scorn. Women who gather in packs and instinctually reject the perceived weak one or the perceived pretty or strong one are the true enemies of the feminine rising.

Drop a beautiful successful woman into a well-established group of this type of woman and you’ll often witness instantaneous scanning from hair to shoes and the inevitable circling of ravens overhead looking for dead meat. Hard to hear? It’s true. The culprit? Competition.

Tell yourself, oh this isn’t true, this is stereotyping and simply outdated information. But you know in your deepest of hearts the pain of false sisterhood power-moves and shunning. You’ve either experienced it or still carry the guilt of inflicting it.

Perhaps it’s primal wounding from eons ago when men were needed for survival but found in short supply. Perhaps we can blame the current saga of the wandering penis and the need to fiercely protect the territory of fertile womb space.

We may never fully understand the reason for our cannibalistic brutality, but until we can learn to stand in solidarity ceasing the gossip, backstabbing, competition, and cattiness, we will never truly rise together.

Who can rise as fanged sisters claw at our skirts, holding us down, and lashing out with forked tongues dripping with the taste of fear—fear of being left behind themselves and forgotten? No one.

And here lies the false premise that one sister’s success robs another of her place. Was this set into motion by our mothers? By men hoping to pit us against one another? Was it birthed at puberty when suddenly our BFF also liked the boy from math class?

Like most wounds, it doesn’t matter how long ago or why they happened, this healing must happen right now for us to stand up again.

Men rise up and hold the power because they band together. Corrupt or correct, in groups—they have power.

We women fall victim to the drama of gossip. All that she did or she said true or not true bullsh*t that separates us has to go.

And the surprise offenders? There are a few:

Sometimes these women show up as the Prana and flowy scarf outfitted women in charge of the local rise of sisterhood and call to the feminine groups. They will sing the song of sisterhood and welcome women into their circles but if you cross another sister in that circle, or choose not to join in the hand-holding, you are cast from the village permanently with a namaste, much love send-off.

Next in line, the seemingly powerful shiny online entrepreneur making seven-figures who loves you and believes in you if you’ll only join her multi-level marketing group. I want this success for you, is her lipsticked trademark. Cross her or reject her and you’ll be frenemies for life.

Do men use the term frenemies? They do not.

Now meet the Mommy Mafia Club. These moms may milk their own goats and spin their own wool—or on the other end of the spectrum—plan their daughter’s country club parties, but collectively, the mommy mafia wrath is heavy.

Don’t cross them or outdo them, don’t piss them off or question them. If you do, it won’t be a punch in the arm or a public insult and game over, it will be a forever ostracizing experience that rivals your daughter’s high school bullies. You’ll be that mom on the outside looking in.

Next, there are power haters. These are women who stand in the background hating on the woman with perceived success or power. The successful corporate woman who seemingly has it all must be sleeping with someone to get to where she’s gotten. Who does she think she is? Is often their battle cry.

Finally, let’s talk about the sisters who stole our men, slept with our lovers, or supposedly hurt our partner in his past. Seriously? Are we really that naive? Dump the man who scorned you but do not dare to release all that negative mojo solely on a sister. Remember the boy’s club?

The bottom line? It’s time to band together, not ban one another.

Until we stop seeing other women as competition or standing in the way of our getting our fair share of cookies, we will never rise together.

Men have risen to power by standing side by side.

We must stop the gossip, the backstabbing, and the bonding together with a commonly perceived she-enemy.

We must cease the competitive belief that one woman’s success or beauty somehow steals from our own.

We’ve got to be stronger than the whispers we hear about other women and refuse to believe the negativity without proof seen with our own two waterproof-lined eyes.

It’s time to take responsibility for our feelings and quit pointing fingers at other females with blame on our tongues for our own insecurities and unhappiness.

So what if she disagreed and disappointed you? Beat you out of something or once dated your man? Does it really hurt your life if she’s hotter, smarter, or more successful? What does it matter if she pisses you off, irritates you, or isn’t someone you want in your inner circle?

True sisters fight and make up, even go through periods of not liking one another or even talking, but at the end of the day, have one another’s back.

We women have walked the same path together, we know the pain and the pleasures of being female as well as the hopes and the fears we face as women. We don’t have to hang out together or even like one another, but we don’t have to seek to destroy each other.

We can wear all the pink hats we want and share our #metoo status, but until we become #wetoo, we will never rise.

It’s time to stand up together hip to hip regardless of our differences and rise together. At this moment, we must face one another and respect the journey we’ve walked in parallel bound by the simple fact that we’re female.

It’s time for a true sisterhood—a girl’s club. We must rise up together, #wetoo style.

Beyond the Catfight: on Evolving Women & Owning the Feminine Shadow. What Feminism is Not. Nasty Women: How we Portray Feminism to our Children.
See relevant Elephant Video