How I used Anger to heal my Eating Disorder. 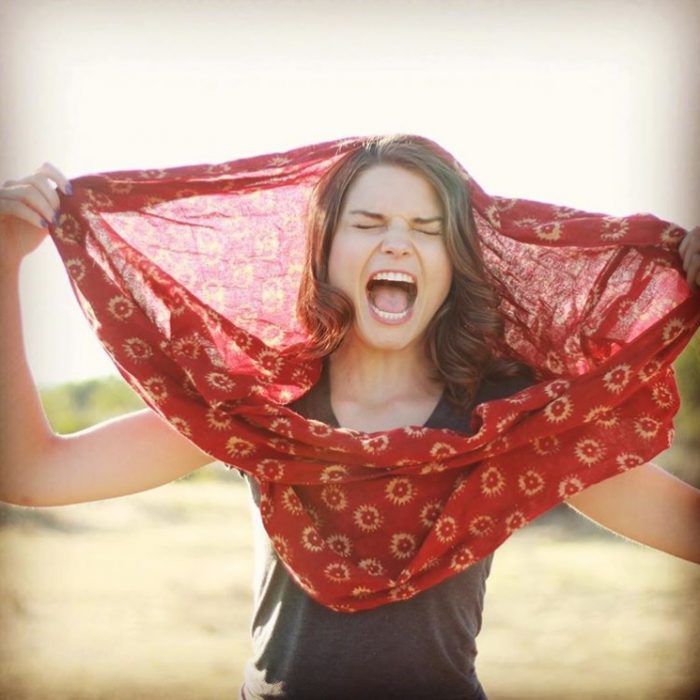 Much of the body positive movement will have you believe that self-love, acceptance, and confidence will heal you from body shame and disordered eating.

But what was most transformational for me in healing my anorexia and body shame was not any of these high vibrational, pure emotions. It was anger.

I was studying politics at a liberal arts school—one that was heavily focused on social justice—called Occidental college. And I was starving myself.

Half of my attention went to being a top student, and the other half went to body-checking and calorie counting.

Fortuitously, amidst the thick of my eating disorder, I was studying how dominant narratives (myths that are collectively believed by a society, construed by the group in power to better themselves) guide each of our lives in unseen and often detrimental ways.

I was studying how the intelligence, sentience, and emotionality of animals whom we eat and wear are diminished and erased from collective understanding, while those same qualities are elevated and glorified when the animals are our pets.

I was studying how women’s bodies have historically been pathologized by the medical community, women’s illnesses have been trivialized and blamed on mental instability, and women’s sexuality has been seen as problematic and even criminalized.

These fables serve to diminish the moral responsibility we feel toward the subjugated groups.

And these fables serve to allow the group in power to control, manipulate, and profit off of the demoralized groups.

I was also studying how in a capitalist system, supply does not just meet demand, but suppliers create demand. Capitalism works when needs are continually manufactured and implanted in the ideas of buyers. Capitalism thrives off of collective dissatisfaction.

I began putting all of this together and came to a startling realization: my eating disorder and body shame was, in large part, manufactured by a society that wants women to hate themselves.

I started to question all of the beliefs that led to my eating disorder and body shame:

>> the more fat a person has, the less healthy they are
>> that some bodies are inherently more worthy of love than others
>> cellulite is a problem
>> my weight is fully in my control
>> diets are effective
>> weight loss will make me healthier
>> hunger is dangerous and I am strong if I can control my cravings

I pored through book after book, only to discover that none of these beliefs were true. Health has little to do with weight; there are no “good” bodies and “bad” bodies; 98 percent of women have cellulite and it’s completely healthy; our bodies have a natural weight range at which they are healthiest and happiest, which varies from person to person, and there’s nothing we can do to change it; diets don’t work and weight loss is not necessarily correlated to getting healthier (often it’s inversely correlated); cravings need to be listened to, not ignored. Whew! I was dumbfounded.

Every belief that engendered my eating disorder was categorically untrue.

I realized that the female population is fed with myths:

I realized that my negative body image wasn’t a personal flaw or just one more thing I couldn’t seem to get right. It was actually a result of toxic cultural programming designed to make me feel insecure and then profit off of my shame.

My society was sponsoring body shame in me, and in almost every woman I knew.

I came to the startling conclusion that the way we have been taught to treat our bodies is pervasively violent.

“If you have excess flesh on your body, then you should either starve yourself, cut it off, or continue hiding your body and hating yourself,” we’re taught to believe.

This is not just any kind of violence, it is state-sanctioned violence. That means that our capitalist, patriarchal culture is actually benefiting from and profiting off of our body shame, insecurity, and fear of fat. So they perpetuate myths and lies that keep us on a futile quest to “fix” our bodies.

Dieting is a political sedative that pits women against each other, sucks our cognitive functioning, and keeps us as second-class citizens.

We waste so much of our time and money trying to conform to an arbitrary, meaningless beauty ideal, and hating ourselves when we biologically can’t.

In other words, we are oppressing ourselves by believing the lies that our society tells us.

Lies that engender shame, insecurity, competition, and fear within and amongst us. Lies that keeps us on a futile quest to buy the “right products” and try the “right diet” that will make us thin and beautiful.

I had been trying for years to just love and accept my body and be confident.

But I realized then that those were not the emotions I needed.

I needed to get pissed that people were actually benefiting from and profiting off of my shame and fear.

That 91 percent of women are unhappy with their bodies and resort to dieting. Yet less than five percent of women naturally and healthfully possess the body type portrayed as ideal by American media.

That more than 40 percent of women and 20 percent of men state that they will consider cosmetic surgery in the future.

I noticed that the angrier I got about all of this, the less obsessive I was about food and my weight.

I understand now that this is because, as described in the Scale of Human Consciousness by renowned psychiatrist Dr. David R. Hawkins, emotions are actually levels of energy that are all connected to one another.

The lowest energy level of all of the emotions is shame, followed by guilt. Five emotions higher up on the scale is anger.

Anger serves as a gateway to the higher emotions, like pride, acceptance, love, and joy.

It is because so many of us aren’t educated about the real source of our body image issues that we are unable to access anger, and therefore, we get stuck down in guilt, shame, and fear.

Through allowing myself to be indignant on behalf of myself and everyone else who was hurt by this system stacked against us, I allowed myself to take back my power.

Anger is actionable. It transitions us out of the powerlessness of shame. I began seeing my judgmental thoughts and shame about my body as a chip that was planted in my brain by a society that did not have my best interest at heart.

I began banding together with other women, bonding over our collective trauma, rather than competing with them. And I began to devote my life to educating others about how these systemic issues affect how they see, treat, and think about themselves. Since healing from my eating disorder, I have coached hundreds of women on their body image issues. I co-lead a program called Embodied Rebel Academy for people who want to learn how to be better body image activists and better equip others with the knowledge that will free them from their body shame.

Without anger, none of this would be possible.

I would still be stuck in shame, trying to fix myself.

So if you still believe that it’s you, not your society, that has the problem, then please understand that what you need is not a better diet plan or more willpower. What you need is an education that will make you angry.

The Day I said Goodbye to my Body Image Issues (& my Best Friend). We Cannot Shame Ourselves into Being Lovable (Body Shame vs. Body Love).
See relevant Elephant Video