Stay calm! A folktale for all ages

Once upon a time, there was a peaceful village. The villagers lived in peace and safety there. Suddenly, one morning, a bad witch who had already destroyed many villages came. She enjoyed being evil to people. Everyone was afraid of her at the village, and all the villagers were very worried. -The witch has arrived. Do you think she can bring evil to us; they were very scared of her. -The villagers were terrified. Fear nested in their soul. You could hear no laughter around. They locked themselves in their houses. Silence prevailed.

There lived a girl with beautiful honey-coloured hair and eyes, Melenia. She prayed every day as she wanted to have a healthy body, a clear mind, and a pure heart. Everybody in the village admired her character.  One day, all of a sudden, loud voices could be heard.  – Disaster, disaster, I am desperate I lost my job. What can I do? How am I going to feed my children?  – Don’t worry people told him.

– On the other side, somebody else yelled:  – Disaster! What will I do? My fields have dried up.  – Everybody check your crops. They might have dried up. My wheat and all my plants are destroyed. A plague occurred. What will I sell now? How am I going to survive?  Everyone ran in panic and saw disaster everywhere.  – The witch… the witch did it as we expected, shouted the peasants.  Melenia was very calm during all this disruption. Neither did she lock herself in her house nor did she change her daily routine. The villagers got angry with her.  – How can she be so calm as If nothing has happened while we are going through all this disaster? Her fields and cattle are the only ones that were not affected. When  Melenia heard about all this disaster, she tried to comfort her fellow villagers.  – Try not to be so scared. Fear attracts evil. Fear is the root of all your misfortune. Only if you ignore the witch, she will not be able to harm you anymore.  – You haven’t lost anything Melenia that’s why you say so.

– But it’s not pure luck that I haven’t lost anything so far. I decided not to let the witch affect me. That’s why I haven’t lost anything. I was never scared of her. You have stayed locked up in your houses since the witch arrived and you were very scared of her, but I kept on going out doing the things I always do. I was thinking positively and didn’t let panic come upon me. Everything will change if you do the same. We can achieve everything if we think positively.  – We don’t believe you, come on now! You’ve agreed about it with the witch.  – That’s why you’re ok, said a fellow villager who was very angry.  Melenia went away and she was very unhappy. She realized that her advice was wasted on them. They were all enraged, and nobody listened to her advice.  – Eh, Melenia, wait, John called, who was a cheerful and well-disposed man. He was certainly very sad now.  – I believe you, but I find it very difficult. I have always been a happy man but now I have lost all hope, and I’m worried and anxious that I am not able to support my family.  – I can see what you mean – but if you believe me, try to change your mind, and soon you’ll see that things will change.

Soon John considered not to be afraid of the witch and the terror she spread in the village. Every morning he got up, went to the fields where he worked. He also sowed his fields again. Everybody thought he was crazy, but when they saw his crops yielding, they changed their mind. They were jealous because John was happy again.  Soon they decided to get active again. John told them since he decided to do what Melenia had suggested things started changing.  – John, we can see you’re getting better all the time. What’s your secret?  – It’s Melenia’s advice. I prayed to God to give me the courage to think positively. That’s why I feel better now. The ones who preferred fear and negative thoughts go through all these. It’s not hard to change our mind. I am sure everybody can manage.  As they could find no better way to change things they all made up their mind to follow Melenia’s advice.  The idea of positive thinking was soon spread all over the village.  There passed 40 days and forty nights. The village changed. Laughter was back in the village square, the kids were playing again, and the villagers worked in the morning and had fun in the evening as they used to.

They had decided to be happy and not afraid of anything.  So the bad witch left the place as she could no more bear to see and listen to the people being happy. Her spells couldn’t affect anybody now.  Happiness spread everywhere. Everybody lived happily ever after. 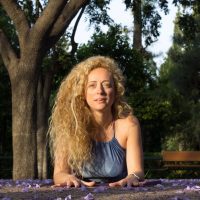 Foteini Dimitriou – Founder of Yoga Family Violet Alignment (yogaviolet.com) – Writer  I was born in Athens and at an early age, I discovered my true love for yoga. I ori… Read full bio