How Money Issues can be a Sign of Unresolved Trauma.

Have you ever tried budgeting with cash envelopes, and it didn’t work for you?

Hopefully my repeated failure at this budgeting strategy can offer you some insight.

I tried budgeting with cash envelopes for almost 15 years. Every time I started, I almost never made it past the first month—maybe I did once or twice, but I always ended up quitting.

It never had a lasting impact on my budgeting habits despite the fact that the revered Dave Ramsey makes millions dispensing this sage advice—so many of my friends also had great luck with this practice.

Mostly, I would spin in and try different approaches instead, always seeking what I thought would work: there’s nothing wrong with that as I’m a fan of whatever works.

However, when I became certified in causal coaching, I decided to take a different, and more curious, approach to the cash envelopes in order to see if I could uncover why this technique wasn’t working for me.

I started again. During the first month, I had all the cash in my envelopes for designated expenses and purposes. The first thing I noticed was that all of my thoughts were directed to how to manage the cash and the different categories.

How do I account for it if something needs to come from a different envelope that’s not with me?

Do I need to bring all the cash with me when I leave the house?

Will that be dangerous?

How do I plan otherwise?

Those were just a few of my thoughts. My brain was working hard to find the evidence that this was not possible for me. I could see that my brain was creating confusion and making it hard for me.

This is what creating confusion does when our belief system is out of alignment.

Confusion is indulgent—we use it to avoid taking action. All it does is stall us out. We would rather indulge in confusion than be afraid. That would usually show up for me in the form of quitting this budgeting practice to seek a different one.

I believed the thought, “I’m not capable of handling money.”

But I knew that the thought that caused confusion was always a lie. So what was I afraid of?

After seeing what my brain created, I decided to be more intentional about my approach. I decided ahead of time that I could figure it out, and I would totally have my own back.

Now that I was out of my protective layer of confusion, there was nothing to buffer the real and painful feeling my brain was protecting me from. For three days, I felt intense anxiety about the envelopes and all the cash in my home.

Anxiety is often the feeling we get when we choose to commit to moving outside our comfort zone—it’s the fear of feeling.

But I sat with it. I let it live in my body, and I noticed the intense fiery feeling around my heart and throat area.

It felt raw and uber exposed.

I felt sheer terror—I even started moving all the envelopes around to different hiding spaces in my house. This time, I didn’t judge myself for my fear or neurotic acts. Instead, I let myself feel terrified, and I observed it all with curiosity.

After processing the fear, I discovered that I actually hated having money.

It meant that I would have to face all of the thoughts about myself, namely that I was a terribly selfish person.

There it was: I actually associated money with the feeling of shame.

I grew up in a family that firmly believed that if others had more money, we would have less. The thought driving the feeling of terror was, “The more money I have, the more chances I have to disappoint people.”

For me, having money makes me a selfish person.

My single mom often worked two jobs, and that was barely enough to make ends meet. What right did I have to use my money as a means to do something desirable, or even fun?

If I had enough money beyond basic needs, it always meant that I had too much of it. If I had any money, I felt guilty and ashamed for wanting to meet any of my own needs in life. There were times when family members even stole money from me.

Having money always put me in a vulnerable position to be harshly criticized and called selfish. The expectation was that I would sacrifice my money for the benefit of others. I felt shame that I would even entertain such a luxurious opportunity as planning to spend money on anything beyond a basic need for myself.

Why wouldn’t I hate money? And even further, why wouldn’t I hate having cash envelopes on hand as abundant evidence of how selfish I am? It’s totally logical now that this budgeting system was a no-go from the get-go.

I could see now how the thought, “I’m not capable of handling money” was just my comfy cave of confusion. It kept me safely compliant, and it protected me from feeling shame from my loved ones being disappointed and envious toward me.

To be shunned from the tribe would mean death to my brain. Brains are good at keeping us alive. Now I was thanking my brain for protecting me. Also, I became aware that none of those thoughts and beliefs were serving me anymore—we no longer live in caves and we can survive without a tribe.

The only way out is through.

Processing my shame story was hard. But it was the best work I have ever done. Causal coaching takes us straight to the root cause of what’s driving our results.

In the past, I always used the envelope system as evidence that I was doing the budgeting wrong. In this way, I noticed that the budget was not the problem—it was the underlying beliefs that were causing the problem.

I worked hard to rewire my brain from scarcity to abundance, and the ironic part is that the more selfish I am regarding my money, the more I have to give to others. Making myself poor and punishing myself for having money never produced more of it for myself or anyone else.

As a money mindset coach, I am now privileged to offer tools to help others have a positive relationship with their money.

How about that? People pay me to serve them and give them value—seems like the opposite of the idea that having money makes me a selfish person. 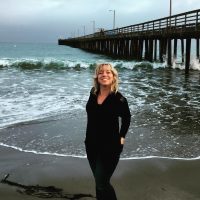 April Wahl is a certified Life Coach with more than 20 years of experience in coaching, mindfulness, and meditation. She specializes in helping women and creative entrepreneur… Read full bio

How to Recognize & get past Money Shame. The Surprising Connection Between Money & our Relationship with our Father. Michelle Obama inspires tears: “Success isn’t how much money you make but how much of a difference you make in people’s lives.”
See relevant Elephant Video