My experience with the word – ‘Detachment’

My experience with the word – ‘Detachment’

Anyone who has explored Yoga beyond the Asanas would be familiar with the term ‘Detachment’ – Vairagya, in Sanskrit. I have not gone into explaining what detachment is as there are a lot of articles written by many on this subject. My effort here is to share my personal experience practicing detachment.

I was introduced to this concept when I entered the path of Yoga. Back then, it did not completely synchronize with my being. It was more a concept or theory one should know about and be aware of. But the more I started studying the teachings of the Masters and various texts, the more I understood and became cognizant and appreciative of the enormity and gravity of this concept. All the Yogic scriptures speak about how one needs to practice detachment to live a happy life. Every time I read such statements, my thought had always been, “If only it were that easy!” The scriptures, however, also emphasize on constant practice to ‘experience’ what is said rather than blind acceptance of anything.

Having being on this path for six years, I recently got an experiential glimpse of what the Masters and texts mean by detachment, why they emphasize on it and I thought of sharing it. I knew a person, say X, a few years back and we were colleagues. We did not have any personal interactions or communication, but we knew each other. Time flew by and we parted. It was Time, again, that brought us into contact a few months back and we ended up spending substantial time together. Soon, we became good friends. However, things underwent a twist when, in one of our conversations, X spoke condescendingly about something too personal to me, without showing the sensitivity I would have liked them to. I was utterly taken aback and did not know how to respond at that moment. The interaction left a hurtful feeling in my heart and I reduced subsequent interactions with X, since I wanted to analyze what had unfolded and get some clarity as to what my response should be – whether I should confront, ignore or get back at X in a negative way.

My initial step was to self-analyze. Why did the incident trigger such strong feelings in me? There was some truth in what X had said but I definitely did not appreciate the way in which it was said, as I found it disrespectful. After contemplating more on this, I understood that the root cause of the pain was my ‘attachment’ to X. We, as human beings, are usually functioning at a sub-conscious level and therefore don’t realize what we are doing and why we are doing it. During the series of interactions with X, prior to the unpleasant incident, I developed the belief that X had a very good impression of me and had no negative thoughts associated with me. What transpired during the incident under discussion dealt a big blow to this belief. Hence, I resolved to let go of my attachment to X, as well as the belief whose falsehood had been exposed. However, I maintained cordial relations with X since I had truly learnt a lot from them and there were – and still are – a few good moments with them that I cherish.

Amazingly, as soon as I started practicing this daily, I noticed how light I started to feel. It was as if a huge load of heavy energy had been released from me – I felt as though I had lost a lot of weight! The lightness I felt within is something I won’t be able to express in words. This also led to a sense of freedom within me. As if, someone had set me free from a bondage. I felt like my heart space had undergone a deep clean-up and suddenly there was a beautiful expansion there. I could breathe easy without any feeling of suffocation. I could so clearly feel the lightness at the level of the body, mind and emotions. I found myself in a state of happiness despite the fact that nothing else externally had changed in my life! It was at that moment that I felt I truly understood what the scriptures have been screaming and trying to explain to us in so many different ways: Attachment only leads to misery. Being detached, but still being present in worldly activities is the way to sail through this misery-filled life.

To sum it all up, these were the steps that I followed:

It does not matter whether the degree of change is small or big. All that matters is the fact that we are moving forward by taking steps towards the betterment of ourselves and our life.

Yes, I agree that I have still a long way to travel along this path. However, I cannot help but wonder how our lives would be transformed if we were able to expand these small openings to bliss into bigger and bigger experiences of bliss, given that just a glimpse of it has the potential to bring about such drastic shifts in us.

The purpose of sharing this article is so that it may be of help to others and make them experience bliss just as I did. Thank you for taking out your time and showing interest to read through! Have a blessed day! 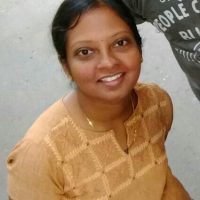 Vanitha Narayana is a yoga teacher by profession. After years of working in the IT industry, she felt the calling to pursue yoga. She quit her profession and decided to follow… Read full bio