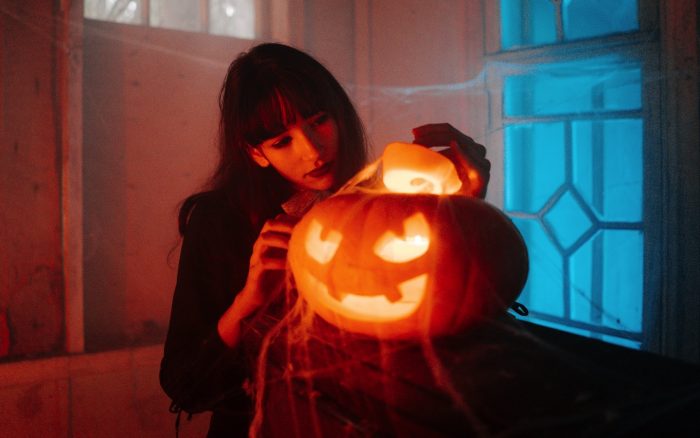 Molly scratched on the door of our tiny cabin.

She wanted out. Her enthusiasm for adventure was endearing. She always wagged more than her tail. Her big, spotted Dalmatian body wagged too.

Once out, she’d pee then run around to smell the forest floor. We lived 23 miles deep into the redwood forest. The nearest neighbors were a good five miles away, so I didn’t worry about Molly. She could explore to her heart’s content, then come back and scratch on the door when she wanted in.

But, on that day, something strange happened.

I heard the familiar scratch scratch of Molly at the door. I opened it right away, but Molly wasn’t there. She was a good 300 feet away, standing on the opposite side of the stream. She looked stunned, frightened. She looked at me, then looked to the left of the door, back at me, then suddenly dashed into the cabin like she was running from evil.

Our cabin was small. There was a main room that served as a living room, kitchen, dining room, two small bedrooms, and a bathroom room. There was no electricity. Our light source was kerosene lamps appointed in each room and one propane lamp on the kitchen ceiling. The Franklin stove next to the dining table was constantly stoked with wood to keep us warm. Some nights got so cold we had to wear a down parka to bed.

I was on the cusp of divorce and learning how to be a single parent. I’d moved with my two young children from the warmth of Southern California to Northspur, an unincorporated forest community in Mendocino County.

We arrived in Northspur during the summer. There were swimming holes, deer, wild berries, ferns, and wild iris. The trees whispered to us as the afternoon breeze made its way through the conifers. There was a meadow down the gravel road where we could enjoy the sun and a homemade sauna that smelled like a eucalyptus health spa. It was paradise.

When winter set in, everything changed. If the sky wasn’t raining, the trees were. It was cold and muddy.

As the dark of winter descended on us, strange things started to happen.

Sometimes while sitting around the kerosene lamp, the room would suddenly go dark, as if someone had blown out the lamp. If you’ve ever used a kerosene lamp, you’d know that you have to blow hard into the chimney globe to extinguish the light. None of us had blown it out. If this had happened just once, I would have written it off, but it happened several times, in different rooms, with different lamps.

Things began to go missing. A brush that always stayed in the bathroom would end up in a drawer in my bedroom. Socks appeared in the kitchen sink—things like that.

One night, around 2 a.m., I was awakened by the light of the propane lamp and the little hissing sound it made. I hadn’t turned it on. My kids were too small to reach it or know how to turn it on. My heart pounded as I turned it off and made my way back to bed.

Things escalated. We heard scratching noises in the walls. We looked for a logical explanation, but we never found one. Just as Molly seemed confused by whatever she saw outside the cabin door, we were confused and frightened.

What was happening in our sweet little cabin?

My fear led me to speak with Ethel for help. She was known to be a gifted psychic. She told me that we were being visited by Evan, an old logger who used to live in the cabin. She explained that his spirit was still hanging around. She said he wouldn’t be of any harm, but I could simply do a ritual to claim the space and ask him to leave if I was frightened.

I didn’t want to wimp out, so I decided he could stay, but then things started to get freaky. We built a corral for my daughter’s pony. We needed a gate, so we moved this ancient-looking, randomly placed gate that lived in the back of the cabin. It had obviously been there for a long time but was attached to nothing. We moved it to the corral.

That night, all hell broke loose.

Our little forested valley experienced the worst storm it had ever seen. Pelting rain and high-velocity wind swept through Northspur and wreaked havoc with buildings, ripping big limbs from the trees. No homes were destroyed, but several structures were damaged. The kids and I huddled together all night long to comfort one another. The next morning, as we assessed the damage, we saw that the entire corral was demolished. The trusty little gate was standing proudly.

As I walked back to the cabin, I found Ethel coming to talk to me. She spoke seriously and said five accusing words: “Did you move the gate?”

I told her I had, and she said I must put it back immediately. It was Evan’s, and he demanded it not be tampered with.

I put the gate back and felt strange remorse for ever having moved it.

Over the next few days, I started experiencing something completely unnerving. Each time I walked through a door, I couldn’t close it behind me. Though I couldn’t see anyone, it felt as though there was a body blocking my ability to close the door.

I decided it was time to do my ritual. I sat down on the floor, lit some candles, and addressed Evan. I told him this was my home now, that he was scaring me, and that he had to leave. I had no confidence that this would work, but I needed some peace of mind.

I’m happy to tell you that after that day, we had no more Evan visits. We were happy in our little cabin once again. But now and then, when looking out the bathroom window, I saw the ferns depress as though someone was leaving footprints on the forest floor. I’m convinced it was Evan, still hanging around but sticking to our agreement—not being intrusive.

The kids and I were no longer afraid. Molly was happy, tail and body wagging, free to explore. Life in Northspur was good again.