This Grieving Sister is Creating Memorial Artwork to Help Other Grieving Siblings. 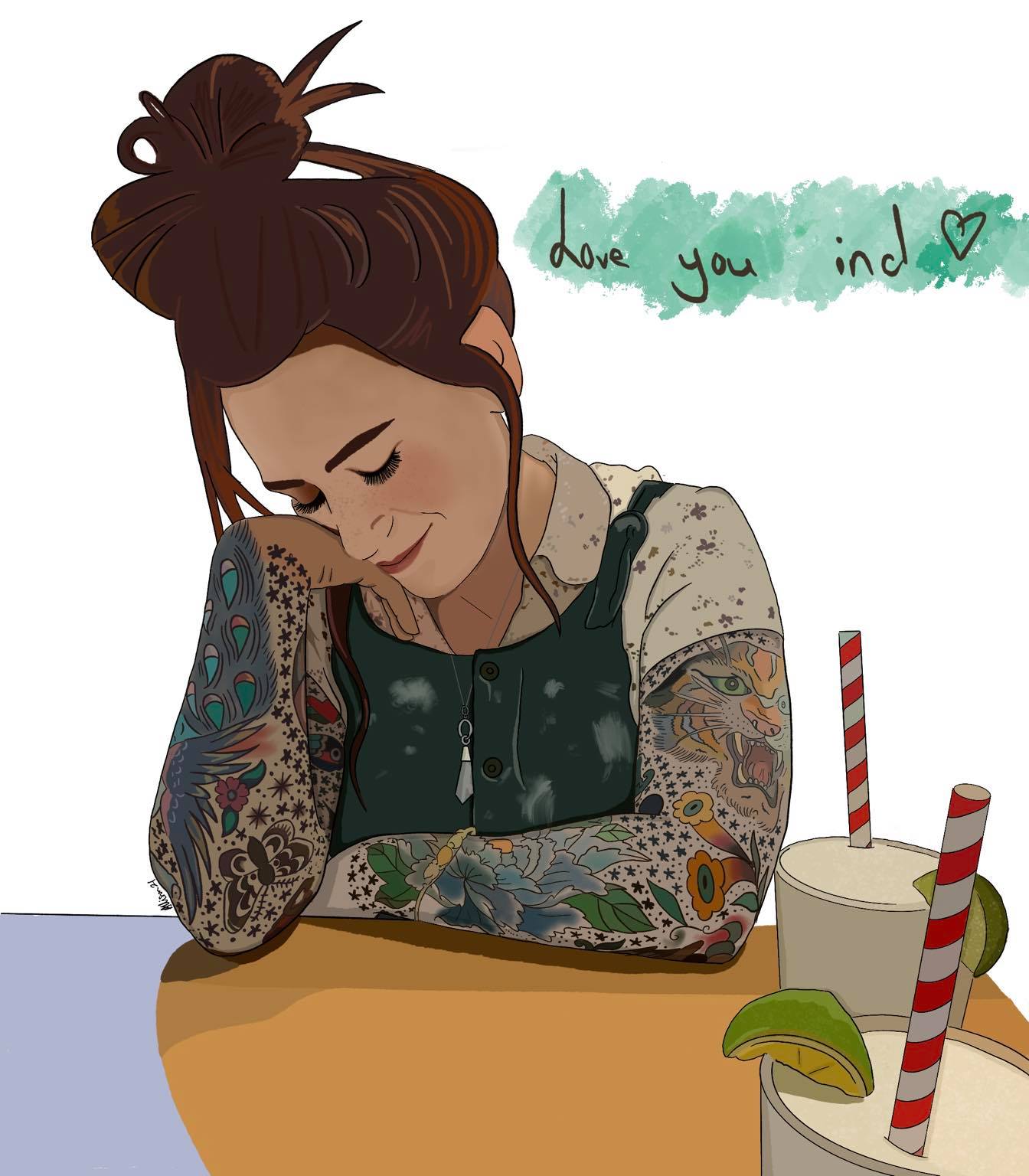 The anniversary of the death of a loved one can be challenging.

Deathiversaries can feel like a gaping portal to the past, brimming with difficult memories.

Last September, on the second anniversary of her sister’s death, Allison Gates was inspired to perform an act of kindness for another grieving sibling to mark the date.

Allison’s sister Angela died in 2018 following a series of health crises. Angela had been battling advanced kidney disease for a year and a half, and Allison had just completed testing to become a kidney donor. But before Allison had the opportunity to help her sister, Angela was hospitalized due to complications of type 1 diabetes. From there, she suffered additional health complications, including calciphylaxis, a rare condition that can cause infections and blood clots. After 10 weeks in the hospital, 40-year-old Angela died.

“She had the worst luck when it came to health,” Allison says of her sister. But even while facing serious health issues, Angela had planned to spend her life helping others. At the time of her hospitalization, Angela had been attending nursing school. “She was unbelievably smart. The smartest person I’d ever known,” says Allison.

As the second anniversary of Angela’s death approached, Allison decided to honor her sister’s generous spirit with an act of radical kindness.

“I took the day off work, and I didn’t really know what I was supposed to do. My sister wouldn’t have wanted me to be sad all day,” Allison says.

While scrolling a private Facebook group for survivors of sibling loss, Allison came across a thread where people were sharing photos of their siblings who had died. Allison, a creative manager for a social media agency, took a black and white image one of the members of the group had posted and digitalized it, adding color. She posted her artwork in the group, and her drawing was met with enthusiasm. “It felt good to know…this person in some way is feeling the same way that I am. If I can make them happy or feel better for just that day, then that’s awesome. That would be something I know Angela would’ve been really happy about,” she says.

A few months later, in January, Allison was struck by another photo on the sibling page. The photo was of Octavia, a stunning young woman who died by suicide in October of 2020. 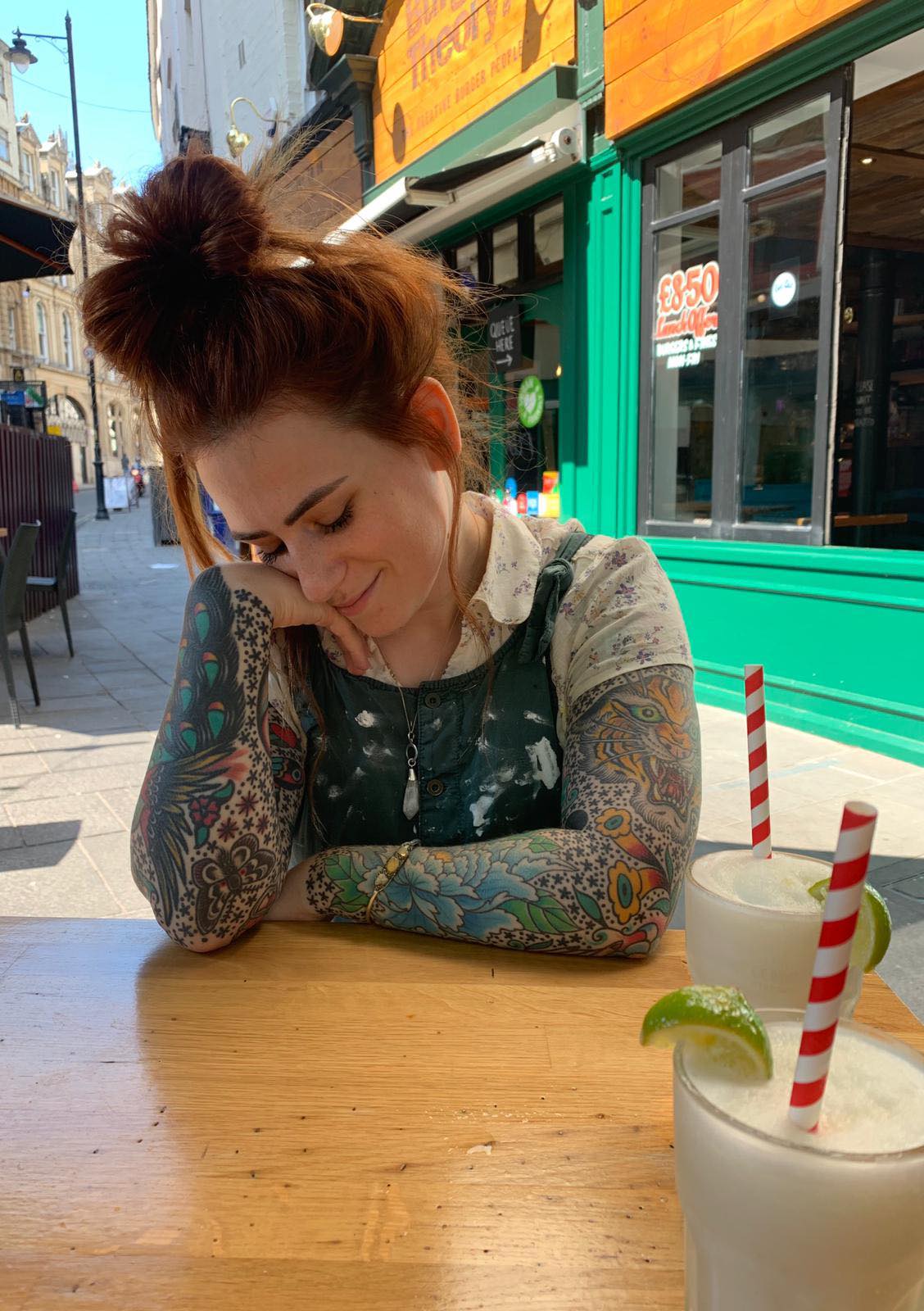 Allison created another digital drawing based on the photo and shared the finished product in the group. This time, the response was even more enthusiastic. By the following morning, Allison’s inbox was flooded with requests from other grieving siblings who’d been wowed by her drawing.

India Long, the recipient of the drawing, says of her sister, Octavia, “She’s the most vibrant, glittery, funny, friendly, loud and magical person I’ve ever met, but she was also quiet, considerate, humble, and lacked in confidence,” she says. “I was so truly touched when I saw the picture that Allison had drawn.”

The drawing came at a time when India was feeling overwhelmed by grief for her sister. “It made me feel less alone and (Allison’s) kindness helped numb the pain I was feeling,” she says. “She captured her so beautifully in the drawing that it felt like she had met my sister, and it lifted a bit of weight from me.”

The drawing was meaningful to Allison, too. “I really loved the final product and the reaction of the woman I gifted it to brought tears to my eyes. Turns out she was having a very rough week and this drawing really brightened her day when she needed it most,” Allison writes on the Instagram account she uses to showcase her artwork. 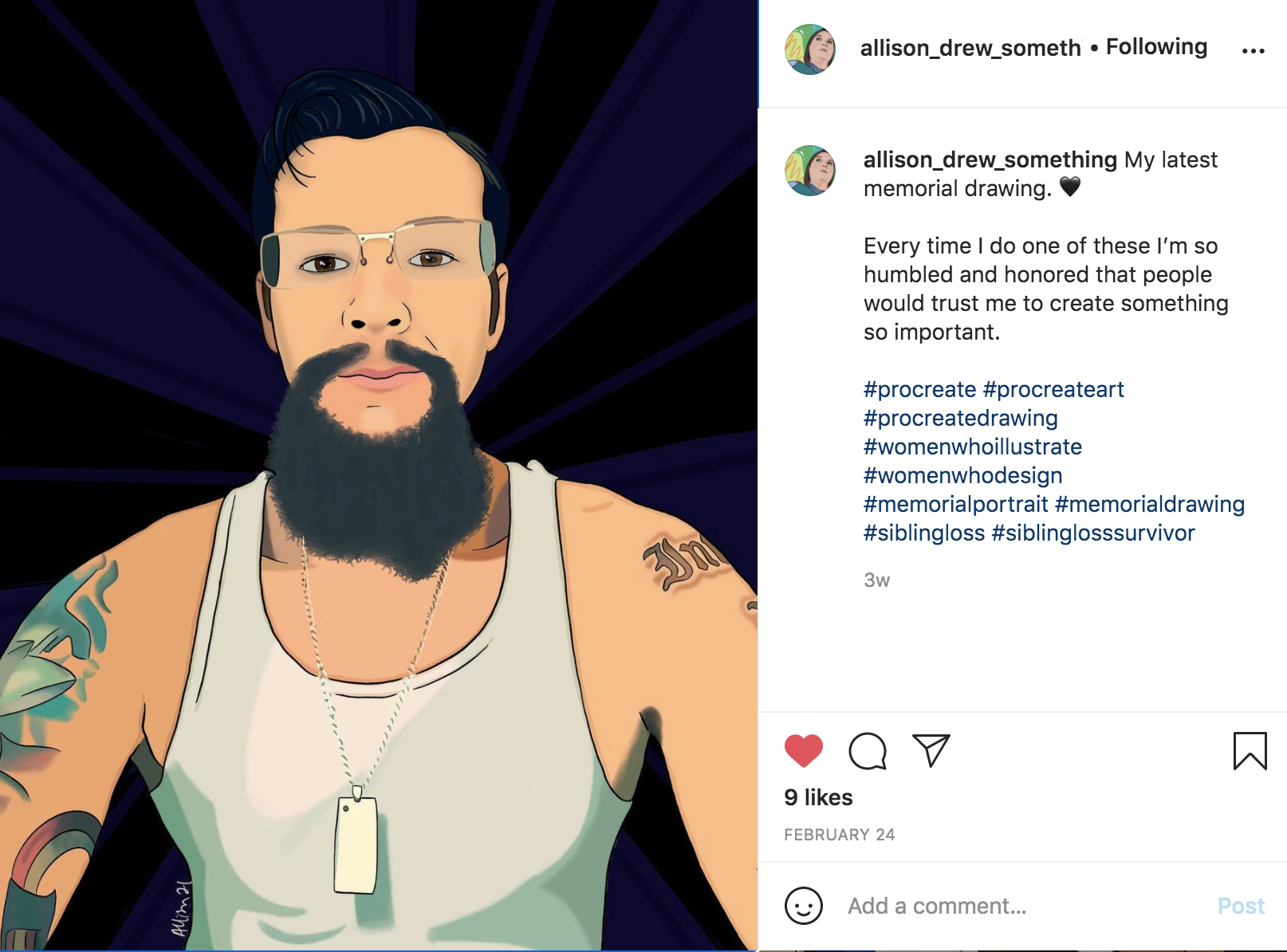 Allison admits that the response to her drawing of Octavia was initially a bit overwhelming; she works a full-time job and is the mother of two young children, while also grieving her sister and navigating life in a global pandemic.

But she’s committed to fulfilling the requests from other siblings, creating two to three digital drawings every week using the Procreate app on her iPad. “It’s been a really nice way for me to brighten someone’s day,” she says.

When we lose someone we love, someone we’d planned to have more time with, part of the pain comes from the loss of the future. It hurts to know we won’t have the chance to create any more memories with the person who has died; there won’t be any new experiences or photographs. By creating these digital drawings, Allison offers something tangible to others experiencing deep loss. 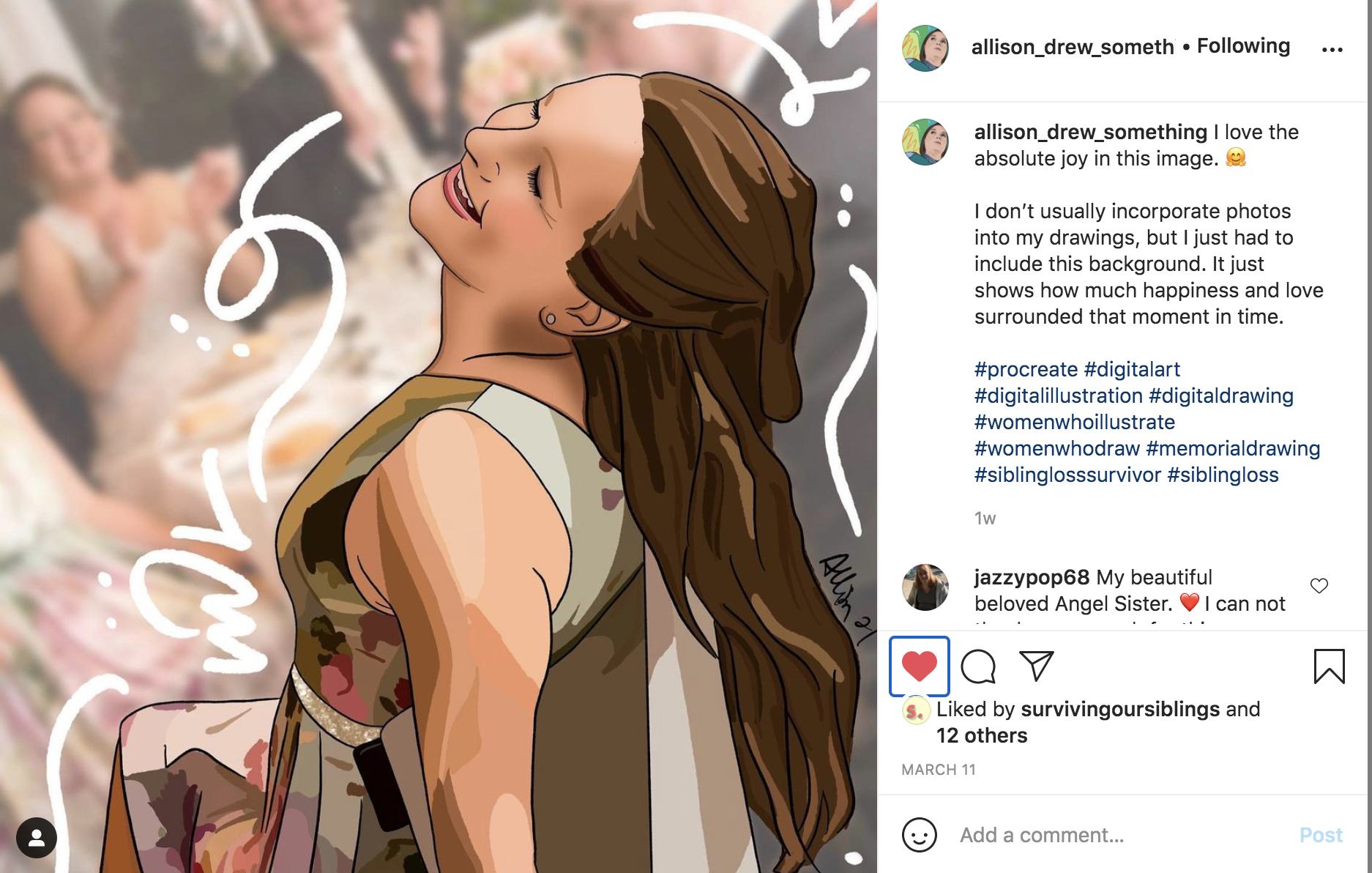 “Creating these for other survivors has really helped me process the loss of my sister,” she says. “A friend of mine put it perfectly when she said that each drawing is like a prayer for my sister.”

“I think she would be glad that I was doing something to help other people. In a little way, it’s continuing on what she was trying to do—helping someone in pain.”