Love at First Site: How to Recognize a Shark in the Sea of Online Dating. 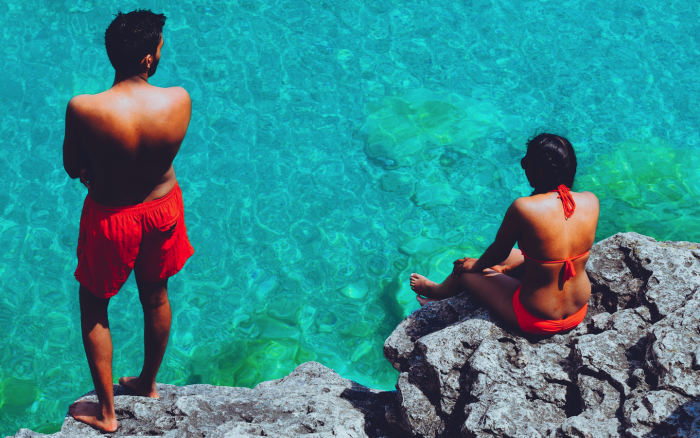 Meeting a partner online has become increasingly mainstream for people of all ages, especially since all the challenges of living in the COVID-19 pandemic.

But looking for love on the internet presents some special challenges—especially for women. As a man who’s done his fair share of scrolling and clicking with romance in mind—and has talked to many women about their experiences—I’ve gained some insights into some of the potential pitfalls of the virtual-chat-up process. And some ideas on how they can be avoided.

The first thing to say is that any dating site is essentially a marketplace of dreams—”buyer beware” should always be the guiding principle (same as when buying anything online). The biggest difference between internet shopping and dating is that there’s no money-back guarantee with the latter. Once you’ve spent time with someone, it’s gone forever. And if you’ve had a painful experience, it can take a while to recover. (And there’s nowhere to go for “compensation.”)

Leaving aside the risk of encountering one of the predators and narcissists who hover around dating sites—as they do in the “real” world—you need to be on the lookout for some particular warning signals. Remember: someone who seems too good to be true probably is! But there are other ways internet dating can go badly wrong, and some simple steps that anyone can take to reduce the risks.

It’s easy for me to see why dating sites are especially popular with women. There’s the theoretical possibility of finding a “perfect” (or, at least, “good enough”) partner in a relatively risk-free environment. Women can feel in control of the meeting process and where technology will theoretically match them up with a compatible “soulmate.”

But the women I know who’ve spent time looking for someone online have discovered that it takes serious work to yield the desired results. And the likelihood of meeting the right kind of person is not much greater than in any other way. In fact, it can be harder. When a woman trusts a computer programme to link her up with a man who is right for her, there’s the risk that she will project her relationship hopes and needs onto a potential “match” and unconsciously ignore or distort the things about him that don’t feel right. Something she maybe wouldn’t do with someone she met in person.

The danger of coming with this over-optimistic state of mind is that a woman can be manipulated into, for example, spending the night with a “soulmate.” Especially if he’s decent-looking and understands how to say and do the right things to her.

The old cliché that women fake orgasms to have a relationship but men fake a relationship to have an orgasm has probably never been truer than in the computer-dating world. Whether it’s because of different conditioning, or innate biological differences, many men are online primarily with the hope of having more sex (even though they may already be intimately involved with other people). In contrast, women are more likely to be looking for a relationship.

Any half-smart male soon realises that success with internet “fishing” depends on having the right kind of bait. This generally means him listening to whatever romantic fantasies his target may share and presenting himself as exactly the kind of partner she says she hopes to meet. In this sense, the “pickup” dynamic between men and women is no different online than it ever was. Although, it is easier to fake that online than it is in person. And after a woman has been hooked, it may not be long before she wakes up to discover that the man of her dreams was exactly that and has moved on to new virtual conquests as quickly as he arrived in her life.

Even men who are, in their hearts, looking for a committed relationship may find it hard to admit that to themselves. It goes against how we males have been conditioned, which is to chase sex wherever and whenever available, without necessarily being open to a deeper level of emotional intimacy. A closer relationship requires a level of vulnerability that comes with needing another person, and this is a risk which some men are unwilling to take. Hence the classic approach/avoidance dance that a man can display in any new relationship until he’s been reassured that getting close to, and trusting, a particular woman won’t necessarily put his treasured independence at risk—and can, in fact, be deeply rewarding.

To avoid being hurt and disappointed by internet dating, it’s best for a woman to be careful not to develop any fantasies about someone she’s met online—even if they’ve exchanged emails or talked on the phone. Wishful thinking is a powerful and potentially dangerous force in this context. Meeting face-to-face in a safe and non-committal place (now that it’s allowed again) is the best way for two people to find out if they have any natural affinity or not.

It’s also wise to be cautious around any “sexual chemistry” which can be there with a new partner. Intense attraction to someone is often rooted in unresolved pain from the past; maybe they remind us of how a parent or a former lover looked or talked. This unconscious influence can leave a woman open to being manipulated by a man who doesn’t necessarily have her best interests at heart.

Like a garden, a good relationship needs to develop in its own time. It’s good for any woman to be optimistic when meeting someone new. After all, they might be just the kind of person she needs. But she should always be on the lookout for any clues that her “soulmate’s” true character and motivation are not quite the same as how they’ve presented themselves in a profile. And if a man seems impatient to take her to bed, any woman should only let things develop at a pace that feels right to her. Generally speaking, genuine people are not in a rush, and she shouldn’t be either.

Finally, there’s nothing wrong with a little judicious research to check whether a new online admirer’s story and credentials check out. Companies routinely do this with new employees; surely, it makes sense to have at least a similar level of caution about someone you may end up sleeping with.