Some feelings about the future (or lack thereof) of Shambhala. 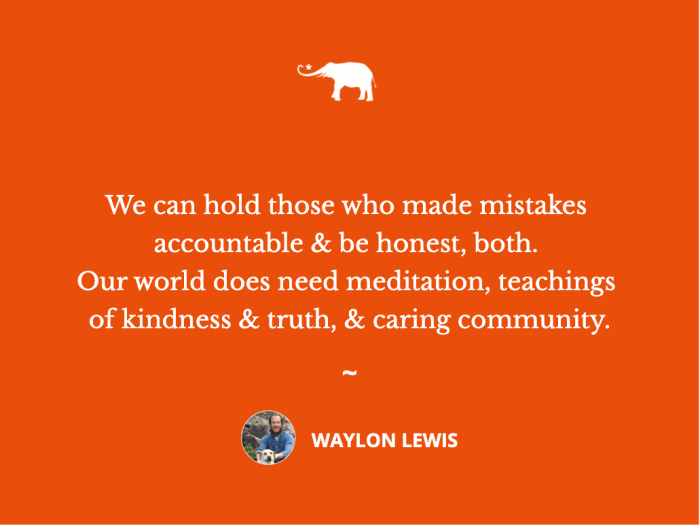 My feelings about Shambhala, and abuse, a few years since revelations tore our once bright, but in some ways sick, community apart.

Shambhala Buddhist leadership and community deserves fair criticism, and was also full of good, kind, creative, humble, fun, caring meditators. Both can be and are true.

I am not a supporter of the Sakyong, though I don’t hate him. I do criticize him, and that, in the Dharma, is something ironically we were taught within Shambhala: not to worship, but to retain our critical intelligence.

I haven’t been active in Shambhala for many years, though I still love much about the culture and art and meditation and teachings, which gave me and so many of us so much. In any strata of society, there are those who were traumatized, who further traumatize others, and there are those who prey on children. Shambhala community was not immune or separate from greater society in this or other ways, and I am glad, though it is painful, that abuses have come to light. That’s the only way we can begin to learn and improve as a community who hopes to offer meditation, safely.

For many years, as many of you remember, I did my best to criticize various aspects of the Shambhala community I loved, and I was a lonely voice in those times, and got both support and attacks for doing so. I am not a party line person, and never was. I believe healthy communities deserve constructive, honest criticism. What’s happening on Reddit is not that, it’s ad hominem, as full of assumptions and lies as it is nuggets of truth. That’s a dangerous mishmash, if one truly hopes to better society and learn from all this, and the important stories of this time deserve better criticism than online mobbing. I know those online are (mostly) fundamentally well-intentioned, they want the downfall of evil doers, but the fact is truth and facts have to get us there, not assumptions, and lies, or hate.

To respond to a few specific points: Bill Karelis should be imprisoned, I wrote that half sentence atop one of his few articles on Elephant (“wonderful teacher”) years before I or anyone knew anything about his alleged crimes against a helpless child. Many, many Buddhist teachers and yoga teachers etc. have written on Elephant, and I can not know about their prior actions, or subsequent actions, but we can and did take action once I do. And so yes, we took his articles down as soon as we found out about Karelis’ alleged crimes, which are horrifying and awful. I’ve said before he deserves the harshest sentence, if the allegations prove true.

Far from suppressing, I actually helped break news of Trungpa and cocaine on Elephant to Buddhists, having previously discussed his alcoholism and womanizing. It really saddened and disappointed me, partially because we were always led to believe he believed in transparency. As for working to suppress/censor news of his cocaine use, again I wrote about it! I have nothing to do with Wikipedia and don’t even have an account or whatever it would take to edit or suppress something. I don’t believe in that. That said, I did not believe making it clickbaity at the time was appropriate–it was a subject for journalism, criticism, contemplation, not some sort of passing excitement. It deserved full criticism, and criticism is a craft, not a tiki-torch parade. I did believe it to be untrue when I first read it on Wikipedia, but then, as journalists do, talked with various senior students, and discovered to my disappointment that it was true. I then wrote that up in a responsible, honest, critical way.

As for Mike Smith, yes I was a close friend for many years when I was younger, as many of us at Karme Choling and elsewhere were, and it’s been incredibly upsetting and disturbing to be dear friends with him, and be close friends with one who was affected by him. It’s confusing and awful and depressing. That said, as a non-sangha best friend of mine has encouraged me when I wanted to withdraw, I try to be there for folks when they are down and out, as do many of you. That’s actually encouraged in the Dharma, it seems, too (see: Milarepa). Mike made a stupid silly sex joke on that video at Windhorse, it was something about a woodchuck or some damn thing. I didn’t make any joke (and neither did my mom). I did love seeing Windhorse.

As for my “history with women,” I was raised by my mom to respect women and treat them as equals, as friends, and I’m frankly proud of my relationships, though of course I made countless everyday mistakes like anyone did, like those writing did, and I learned from those (hopefully!). I’ve been friends and still am with just about everyone I’ve dated, unless we’re just out of touch. The sole exception is someone who has their own complicated history, and I wish her only the best.

Overall, I don’t see much future for Shambhala unless it can both hold those who made mistakes accountable and criticize them and others fairly, honestly. To make a fresh start, we have to make a fresh start. The world does need meditation, teachings of kindness and truth, and caring community. Shambhala was that, often, mostly, for many of us, and I hope that in some form it might be again. But I don’t see that happening now, or yet, until we can do both of those two things. Again, it’s good when truth comes to light—but we can’t use that light to simply destroy or hate. We have to use it to learn and improve and heal and serve others.

May it be of benefit!