At 49, the Stars will soon be a Distant Memory for Me. 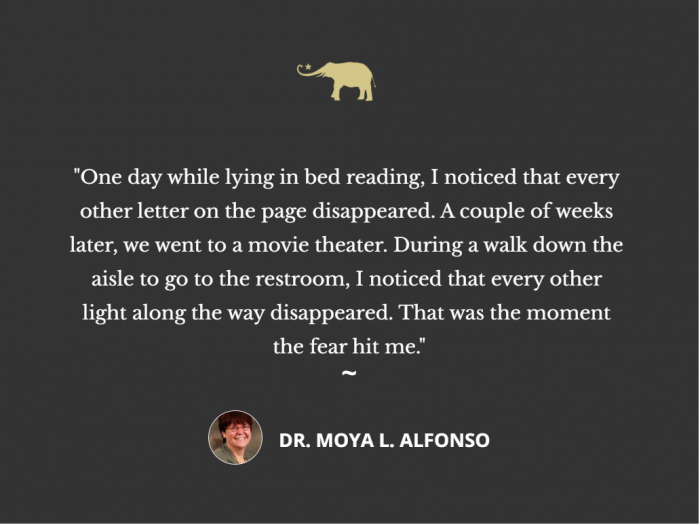 One of my favorite things to do is stand in my backyard and stare at the stars in the sky.

Although we live in a city with a lot of lights that distract from the beauty of the night sky, the stars that hover over our backyard twinkle as bright as they used to out in the country where I was raised.

As a little girl, my father would stand with me out in the darkness of our 40-acre farm and try to teach me the constellations. I can remember leaning my head back and staring at the bright lights above. As a retired Air Force navigator who used to fly by the stars, he loved to stare at the sky with me.

My father was around 28 years old when I was born. I was the retirement baby my mother planned for—and he had not. My father was forced to medically retire from the Air Force because of an eye disease, presumed ocular histoplasmosis, that caused hemorrhaging and scarring in both eyes. Histoplasmosis is a fungus that is found in bird droppings and is endemic to the Mississippi River Valley.

All of these years later, there is no cure for those affected. Now in his 70s, my father receives shots in his eyes every six weeks to stop the progression of the disease. He is now virtually blind, left only with memories of the stars he so loved.

I have a lot in common with my father, including presumed ocular histoplasmosis that ravaged my eyes in my early 20s. I am not sure where I was infected, but it most likely happened either on the farm where I was raised or in New Orleans, where I attended my first year of college. It’s not really important where I picked it up though; what’s important is the impact that it’s had on my life.

One day while lying in bed reading in our townhome in Aurora, Colorado, where my husband, an airmen, was stationed, I noticed that every other letter on the page disappeared. I recall getting up and going to the bathroom to check my contacts. I took them out and put on my glasses and naively thought that would correct the issue. A couple of weeks later, we went to a movie theater. During a walk down the aisle to go to the restroom, I noticed that every other light along the way disappeared.

That was the moment the fear hit me. Fear of the unknown. Fear of not being able to see my family. Fear of my life changing forever.

Soon thereafter, I went to a retinal specialist to have my eyes assessed. Like my father, I had “histo spots” in the center of my vision in my left eye and around the perimeter of my right eye. I was given a shot in my left eye to try to stop the scarring from getting worse. Having a needle come at my eye was quite the experience. I was given an eye patch to wear over my left eye and told to “get rid of the stress in my life”—to which I, a mother of two toddlers and a new wife with dreams of college, laughed at.

My eyes stabilized and I adapted to the blind spot in my left eye. The most immediate impact was my loss of depth perception, which affected my driving and my participation in my church’s softball team; I could no longer catch a ball or hit a home run. Humans are amazing in their ability to adapt to disability, and I was no different. I saw a retinal specialist once a year since my 20s and had my father to turn to for support over the years.

Several years ago, while we lived in rural Georgia, I developed an ocular distortion in my right eye out of the blue. I thought it was an ocular migraine; however, the bright wavy lines did not go away. I went to a local specialist who saw nothing that would explain the distortion. I was then sent to a retinal specialist in Savannah who did not see anything related to the histoplasmosis. I was then sent to a neurologist to have my ocular nerve checked. The results of the CAT scan came back normal.

Many appointments, lots of tests, and a series of blinding pictures of my eyes later, I was sent home with no answers. I learned to live with the constant wavy distortion in my right eye. Reading was more difficult, which was tough as a professor who was required to read her own work and that of others.

When we moved back to Tampa in 2018, I made an appointment with the eye clinic that I’ve gone to since I was in eighth grade. They have amazing doctors on staff and my father had recommended his retinal specialist. During my first appointment, I had baseline photos of my scarring taken and was told that my eyes were stable. I failed to mention the ocular distortion because I was told it was basically my imagination in Georgia. It was getting harder to see though, so I scheduled a follow-up appointment where I described the distortion. After more pictures and an angiogram, I was told that I was seeing a “histo spot” in my right eye. My doctor reassured me that I was not crazy and wasn’t imagining the distortion.

A few months later, another distortion showed up in my left eye—the one already with a scar in the center of my vision. I went back and was told that there was nothing that could be done and to come every six months. I check my eyes daily now and have accepted the fact that at the age of 49, I am headed down the same starry path that my father has. A path that leads to loss, both of my independence and the joy of seeing the faces of my family.

All these years later, my father and I are staring at the stars in our eyes. Constantly twinkling whether our eyes are open or closed. They are ever-present and as bright as the stars in the night sky. 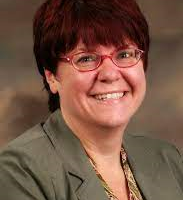 Dr. Moya L. Alfonso is an aspiring writer who has spent her adult years helping others live healthier lives. She lives in the Tampa Bay area with her husband of 31 years and t… Read full bio