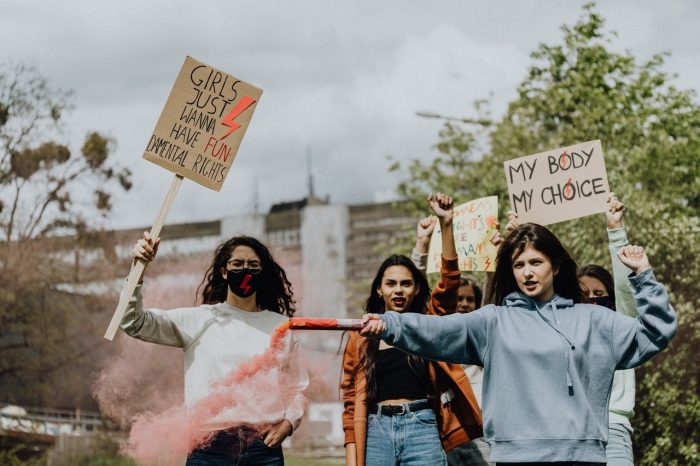 The second half has been encouraged for men and taken away from women since millennia, and sadly, to this day.

Instead, women have been kept in the role of the nurturer, mainly through the romanticizing of the idea of motherhood.

Therefore, we have been valorized when taking care of others.

We have been trained to be accommodating and at disposal, to the point of not being the ones deciding anymore about our behavior, our body, and our sexuality.

Our ancestral wound is this adaptive skill to be more aware of what others expect from us than what we actually desire. I see it at play every day in my coaching practice.

It’s been transmitted through generations of women who had to pretend they enjoyed playing the scenario being imposed to them, to display the accommodating qualities of a potential, good wife. Otherwise, a lot could be at stake—no future, shame, and dishonor on their family, rejection from their community, isolation in a coven or some other place, asylum, misery, being raped, being burned.

That’s how we learned to disown our destructive part—our ferocious nature. And despite the evolution of our rights, society still doesn’t acknowledge that part of us.

Very little credit is given to the woman who goes against, slays, destroys, removes.

Embodying that facet of her always leads to some sort of sanction.

This punishment is still severe and part of the law in a lot of countries. Afghanistan is one example where women are clearly in danger and can’t even fight for their rights.

In the western world, we thought we were protected, even if the mocking of women who don’t comply is still lingering in our culture:

A woman expressing opinions is too opinionated.

A woman who leads is bossy.

An angry woman isn’t listened to and should get laid.

A woman with rage is hysterical and should get therapy.

But now, with the overturning of Roe v. Wade, for the first time, a major constitutional right is taken away.

Women are again disowned from the sovereignty over their bodies and will be punished from choosing to remove their own fetus when they wish to. And more often, without exception for their health, for rape, or incest!

And I am a raging woman now, hearing the people supporting this move qualifying themselves as pro-life. Especially when they are part of a religious, dogmatic group.

If they were pro-life, they would be protesting massively to regulate the access to guns after the school shootings; they are not.

Some of them, more extreme, would stand in front of gun shops shaming some customers; they are not.

They would fight for tax money being directed to anything relating to the support of child care—health, food, housing. They are not.

Most of them don’t care about the future of that child.

So what do they care about ultimately?

The good old principle that sex should be reserved to a committed relationship as a vehicle to carry babies into this world.

A principle based on a belief that it’s the right thing to do.

By the way, I respect that some people genuinely want to live by this principle. If it works for them, they should be able to do so.

What is not fair is imposing this belief to all of us when we don’t share it.

A belief that, among other things, keeps women in the role of the life giver and carer. A belief that have them renounce any impulse to destroy, end, remove, or go against. A belief that keeps them performing a lifetime of free labor for others.

So how do they get so much power to gangrene our laws during modern times with an entirely created belief?

They used the same weapon, over and over again:

The demonizing and shaming of female rage.

Until women covered it in the workplace to be credible for a political career and in our various relationships with a nice complacent smile that became part of our own destruction.

When rage is indeed our sacred fire, it appears when we ferociously want to protect what’s alive for us in this moment—the safety of a loved one, our thirst for knowledge, a project we care about, our freedom, our rights.

And yes, we feel what’s most alive for us at a given moment, and sometimes, it’s not a fetus. So we remove it because we can anticipate the disastrous, long-term consequences of an unwanted birth. The first life we have to protect is ours!

Female rage is the embodiment of our destructive side and our fiery protector.

When we repress it, its fire doesn’t go away. It burns us from the inside. And the only byproduct of this is consuming resentment.

For a moment, we let rage speak.

2022, the overturning of Roe v. Wade; here it is, the setback, the contraction.

But this is not over.

We are a lot of practitioners helping women to own their capacity to destroy as much as their capacity to create, to stop renouncing half of their power to be nice and accommodating, to tune back in the cyclic nature of life they are part of, made of constant death and rebirth, as both always dance together.

By overturning Roe v. Wade, you actually rejoiced with all the people who killed the life in us since the beginning of times.

You’ll have on your hands the blood of women with not enough support to fly to another state who will die from an alternative solution or not enough proper care.

And depriving even victims of rape and incest from that right is pure cruelty.

You can no longer bring your “pro-life” flag after that.

You are not pro-life, you are pro-forced-birth. And we are tired of being forced upon.

We, the granddaughters of the witches you couldn’t burn, are ready to become that rage, that fire you always want to extinguish. May it burn to the ground once and for all your made-up tale claiming our bodies as your property!