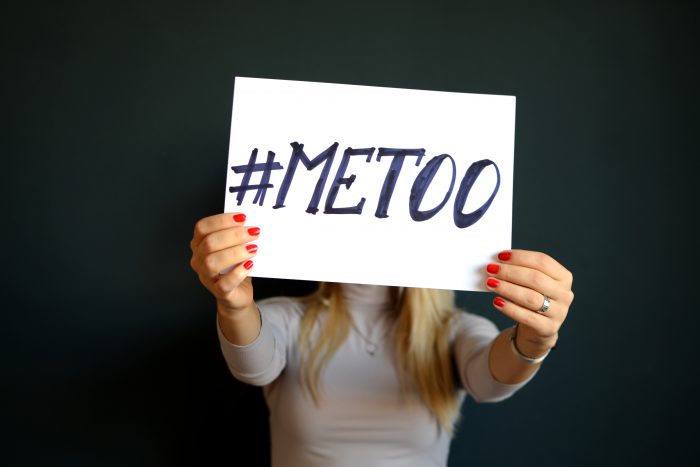 Early in my legal career, the owner of the company I worked for sexually harassed me. I knew I was smart and tough, I had dealt with harassment before, but I had never been in a position where someone with that much power over my career was the harasser. It was almost worse that I really, really wanted the job. I talked with an employment lawyer, and the only advice she could offer was, “Things are really sexist, and we just have to deal with it.” I was not satisfied with that answer, and so I researched and learned everything I could. After more than a year of harassment, through the learning and work I did, I had the empowering experience of having my harasser apologize, change his behavior, and we worked together for years after.

Now, I teach what I learned to other women, and I see them experience the same subconscious patterns that initially held me back. I have changed the names below to protect my clients.

Leslie, for example, thought, “Those poor women,” when she first saw women posting #MeToo. She supported the movement and went to the Women’s Marches. She wanted to do whatever she could to make things better for women in the workplace – after all, she was a successful research scientist in a male-dominated STEM field. It didn’t occur to her until months after she first saw a #MeToo post that she, too, was experiencing sexual harassment.

Jayna had a similar story. She worked in a science field that required intense manual labor and was heavily dominated by competitive men. Early in her career, she experienced egregious sexual harassment that was physically threatening. When that resolved, she continued to experience daily slights, ostracization, and ridicule from the men around her, but because it “wasn’t as bad” as what she experienced years before, she was reluctant to call it sexual harassment.

I talk with women in similar positions almost every day, and I hear the same thought patterns over and over. They sound helpful, but really they hurt women’s careers. They encourage women to believe that women who talk about sexual harassment and post #MeToo are “different” than strong, smart, successful women. Here’s why those subconscious patterns are not as helpful as they seem and what we can do about them.

Subconscious Pattern #1: I Don’t Want To Be A Victim

Many women are reluctant to identify “sexual harassment” in their workplaces because they don’t want to be victims. Usually, if we look at it directly, we can see that someone else sexually harassing us does not mean that we’re a victim. But, we still end up convinced that if we talk about the harassment – just the act of talking about it will make us a victim.

For example, if I am watching a toddler, who starts running around my house breaking lamps and furniture, I would not think, “Well, I shouldn’t call that bad behavior because I might sound like a victim.” Sexual harassment is socially inappropriate behavior, just like breaking furniture is. When we buy into the idea that the perpetrator’s behavior means something about us, it holds us back from identifying and stopping the problem behavior.

The statistics show that girls do better than boys in school overall, and when it comes to stopping sexual harassment, that may be one area of success that actually undermines our safety. We are raised to work twice as hard to get the A+++ in school and to please our teachers. Then, when we run into a harasser that is in a superior position to us (sometimes a literal teacher) all of our training fails us.

Often things get worse because women try to make the harassing boss happy or “do a better job” to avoid outbursts and threats. This is like giving candy to the toddler running around the house and breaking furniture. It might insulate us for the short term, but it rewards the harassing behavior. We are smart enough to please our teacher/supervisor/boss and advance by getting their approval and support, but we have never been taught what to do when that system betrays us.

And, that’s the key: we’ve never been taught. When we fall into the trap of expecting ourselves to just “be smart enough” to stop sexual harassment, it is an unreasonable burden.

Much of the media coverage of the #MeToo movement has created the narrative that either women have to be “tough enough” to tolerate sexual harassment or leave their careers. We start to congratulate women for their toughness on either side. That is not necessarily wrong and we should honor any choice a woman makes in responding to harassment.

But, this binary narrative misleads us into thinking those are the only two options. It ignores the stories of women successfully stopping sexual harassment. When we believe that we either have to be “tough enough” to tolerate behavior we don’t like or leave our careers, it traps us either way.

Those are not the only two options. Both Leslie and Jayna, through our work, not only addressed the sexist behavior, but also took significant steps to advance their work. It is possible to stop sexual harassment without quitting. If you don’t know how to do that, you can still be smart and tough. It doesn’t mean you are a victim; it just means you were never taught how.

Meredith Holley is a lawyer, life coach, and bestselling author of the book Career Defense 101: How to Stop Sexual Harassment Without Quitting Your Job. Meredith helps professional women stop sexual harassment and clean up toxic work environments, without quitting, so that they can focus on work they love. For a free copy of her book, visit www.CareerDefense101.com.

Love this! You can still be smart and tough! Thank you.

Great article and I totally agree, education is key to preventing and confronting sexual harassment. I teach it when it begins, in middle school, to kids and their parents. This sounds like a great book to not only help careers, but help parents talk to their kids about it.