Unconditional Love. An Homage to Zora. 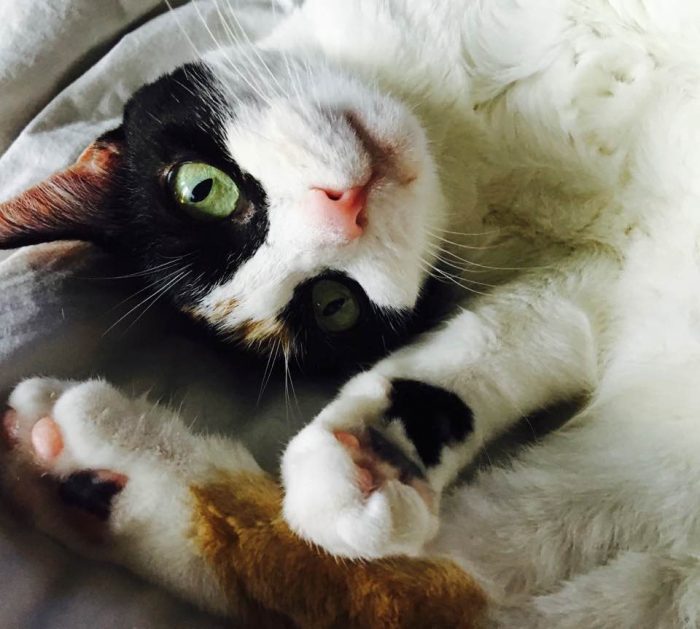 She dropped into my life with a bonk-and-roll on a restaurant patio. (For the unenlightened, bonks-and-rolls are patented cat moves designed to win your heart: a head bonk to the ankle, followed by an immediate hard drop to the floor, a roll onto the back, and a plaintive gaze into your eyes. Few can resist this charming ploy.)

The restaurant owner, sensing a sucker, primed the pump with a tale of woe. One day the cat simply appeared at his restaurant, the aptly-named Capt’n Shrimp. Telltale clues hinted at a mysterious past. She’d been declawed. She’d been spayed, too; her clipped ear suggested she’d been part of a catch-and-release roundup. She depended upon a dumpster full of garbage and the owner’s good will for survival. Fortunately for her, her impressive bonk-and-roll had worked its magic on him; he’d been feeding her for two years. But now he was selling the restaurant to take care of his mother. The cat couldn’t come with him because his mother was allergic.

Even though I already had two cats, I couldn’t get this cat and her story off my mind (expressive green eyes and a mellifluous meow can have that effect). She’d led a life so rough, it should have wrung all the trust and sweetness from her—but somehow it hadn’t, and that made her immediately special. So I did what any sane person would do: I told my cat-loving son all about her, knowing he would beg me to rescue her and “of course” I’d do anything to make “him” happy.

A few evenings later, after the restaurant had closed for the night, my son and I returned to Capt’n Shrimp. Now Capt’n Shrimp was located in a rough side of town; as we pulled in, several young men were perched on wrinkled cars in the otherwise-deserted parking lot, passing around bottles and joints. I hadn’t considered nefarious nighttime activities when we’d embarked on this rescue mission. Feeling uneasy, I said, rather nervously, “We can’t go searching for her. If we don’t see her, we’ll have to come back when more people are around.”

But there she was, sitting tall and straight on the patio table where we first met, as though she’d been waiting for me ever since. A spotlight—was it a streetlight or a security light or something more divine?—seemed to shine down on her, making her fur glow. Nicky quickly pulled her into the car; she immediately draped over his lap, purring happily.

We named her Zora, a feminine homage to the black Zorro mask around her eyes. She settled in without incident and easily won the entire family over with her friendly charm, but she reserved her most ardent affection for me.

When Zora joined us, I was in a challenging phase of life: newly divorced and single for the first time in 20 years, learning to cope with the demons so easily pushed aside in the busyness of family life and coupledom. Zora stood (or mostly, slept) steadfast by my side through the attendant ups and downs: from the end of a rocky relationship to the beginning of therapy (where I finally confronted my #metoo past), from dark sleepless nights that gradually softened into bright rested mornings, from the end of therapy to the blossoming of an astonishing new relationship that led to marriage and a move to Georgia. Through eight years of my transitions, Zora remained my faithful, non-judgemental, stalwart companion.

And now Zora is making a transition of her own.

Last week Zora began walking with a limp. “We’ll keep an eye on it,” the vet said, “but I think it’s just a sprain. I can feel a little popping in her shoulder.” But yesterday, the limp extended into her back leg, prompting another panicked visit to the vet. This time the vet was concerned enough to send us to a specialist. So off we went for a full battery of tests. And last night, we learned that Zora has cancer. Because of its location in her spine and along a major nerve, the prognosis is not good.

When we brought Zora home last night, she was excitable and scared, scrambling about frantically on the floor, unable to move her legs after being under anesthesia. She could only be soothed by being cradled like a baby and rocked. So I held her and rocked her for three hours. And she slept peacefully in my arms.

This is all I want for her now: peace. Because when someone has given their heart to you unconditionally, there is no other way to repay them except to love them back the same way—unconditionally and (I hope) selflessly.

As an adoptee, I constantly struggle over how to react when someone tells me I’m lucky to have been adopted. They’re right, of course, but the smaller, meaner, pettier part of me can’t help but wonder: shouldn’t it work both ways? With Zora, it’s always felt equal, as though we adopted each other. More than that: we chose each other. And—trite as it may sound—she has given me far more than I ever could give to her. I’ve been the lucky one. And the price I must pay is that my heart is breaking now.

I don’t know what the next few weeks (or months, if we’re lucky) will bring. But through all of this—and beyond—I will hold her and rock her and love her forever.

Postscript: I lost Zora on October 29, 2018, at 8:45 a.m. The drugs quickly—too quickly—had lost their effectiveness, and her legs had grown increasingly weak. She could no longer do much except sleep on her favorite sofa. She needed assistance in the litter box; she had slowly stopped drinking, then eating. On Saturday morning, I knew the time had come to make the final appointment.

Sunday dawned warm and bright. Zora spent her last afternoon stretched outside in the grass, luxuriating in the feel of the sun on her fur. In the evening, she held court on the family room sofa, where we showered her with hours of belly rubs and kisses. She could still move her legs while lying down, and she used them to gently guide our hands to her preferred spots, her eyes contentedly at half mast.

I slept on the sofa with Zora Sunday night, curling myself protectively around her small body. If I moved my hand away from her, she stretched out her paw to pull me back in; in the hours before sunrise, she struggled to shift her body so she could tuck her head into my arm. I think she sensed that we both needed reassurance.

Too early Monday morning, we wrapped Zora in a soft towel and took her to the vet. I cradled and rocked her, sobbing, as they injected the medicine. She died in my arms as we looked at each other for the last time. I hope she saw the love in my streaming eyes as the life faded from hers.