Last weekend I experienced first hand the frenetic anticipation of his Holiness the 14th Dalai Lama’s visit to Vancouver for the 2009 Peace Summit.

Produced by the Dalai Lama Centre for Peace, an organization founded in 2005 by the exiled Tibetan leader, and his close friend (and Vancouverite) Victor Chan, the Centre aims to

The 2009 conference brought together internationally renowned luminaries, from Nobel Prize Laureates and Peace Activist Mairead Corrigan Maguire and Betty Williams – women instrumental in promoting peace in Northern Ireland and beyond – to creative visionaries like Sir. Ken Robinson, change agents like Maria Shriver and the Dalai Lama himself, in discussion of the ideas of global peace, education and transformation.

As a volunteer assisting with the media and as a writer, I wore multiple hats, helping usher media into a secluded screening room where we could blog, tweet and chatter about the impending summit, while also being included in choreographed photo-ops, where we (the press corps) could walk or rather scurry across the lawn at the University of British Columbia to get that perfect photo of His Holiness.

So it was that on a crisp fall, Sunday morning, I waited with about thirty other press photographers for the cavalcade of motorcars to arrive.  It wasn’t a huge entourage, just three black town cars.  The Dalai Lama emerged from the first one.  I stood ready, my fingertips on my camera poised to shoot.  The energy around me was palpable, tense – like being at the start of a race – and as soon as the car doors opened, shutters including mine, went off one by one in quick succession.  I got a few photos and then paused, feeling the strangeness of the situation.

Here was this great man, a spiritual leader of our times, whose philosophy and life has inspired me in various ways for so long, yet I had never seen the Dalai Lama this close before.  To me, as to my fellow reporters, this was a momentous occasion.

Instead of taking the Dalai Lama’s picture, I wanted to throw myself forward in prostration, to receive a blessing, or to somehow acknowledge and enjoy the present-ness of this moment without having to record it for digital posterity.

I let the camera hang on my shoulder by its strap and made a conscious decision to watch this old yet sprightly, saffron-robed man approach, drawing my hands together in a namaste. He treaded slowly, a slight bow to his head, hands folded in prayer, his lips tinged in a faint smile. A second later, the Dalai Lama paused right in front of me.  He asked me if I was from India.  When I said “yes,” he smiled, shook my hand, bowed his head and said “thank you.”  Then he smiled again, a wide grin and moved onwards.

It was an encounter that lasted only a few moments, and it was probably the first of many such encounters he would have throughout his day – he is known to be spontaneous, his “handlers” do not try to keep him in check – yet the effect of those moments had only begun to resonate in my mind.

Why did he come up to me? Could it have had anything to do with my desire to be present? Could he have sensed my intention?

I also thought about his comment.  He didn’t have to thank me for being from India.  As if I had anything at all to do with his having a home in Dharamsala, the result of a rare, enlightened decision by the Indian government in 1959 when they welcomed the exiled 23 years old Tibetan leader to Indian soil, with the implicit understanding that the Dalai Lama was really a spiritual figure, not a political one.

And yet, perhaps it may have been on his mind.  After all India and China do enjoy a complicated relationship. In a poll by Indian political newsweekly Outlook, taken in late 2008 after the Tibetan Insurgency protesting China’s human rights practices, 71% of the respondents agreed that the Dalai Lama has had an adverse effect on Sino-Indian relations.

Yet, they also voted (78%) that India should not expel His Holiness. Perhaps the Dalai Lama while being a thorn in the side of India’s relationship with China is also a virtuous addition to India’s standing in the global community. Doesn’t that make him somewhat of a political figure as well?

When you look at the root of the word compassion, said Nobel Laureate Mairead MacGuire, it is

Not a passive way of living at all.  As any Buddhist would agree, this path of compassion requires work and practice and ultimately the deep belief in our humanity, that every life is sacred and that we are willing to do everything we can to safeguard that belief.

Yet, in a world where the threat of war is always pressing, where turbulence flows through every aspect of our lives, economic, environmental, political and social, is this just idealism or can we look to this message and apply it to our lives?

Reverend Mpho Tutu (the Archbishop Desmond Tutu’s daughter) and a peace and human rights activist herself, believes the answer lies in relationships.  In being committed to working together, with one another. It can be hard to imagine world peace, when you don’t have an example of what world peace looks like.

She continued, “We need examples of what a good partnership looks like.  How do we negotiate when we’re talking about things that really do matter to us?  I know that peace is possible.  I have seen my parents.”

Perhaps that is the only way to approach the vast ideas of global compassion and peace.  By starting from within our individual selves, our family and community units.  Maybe then we can link to that belief in the ultimate good of humanity that the Dalai Lama optimistically offers us.

“At the fundamental level we (all 6 billion of us) are all the same. No difference, mentally, emotionally or physically. We are the same – at that level there is no reason to fight.”

Ultimately, it is this heart-based humanism that struck a chord with me during my brief encounter with the Dalai Lama. To be able to glimpse what lies on the other side of conflict, to be able to connect even for a few moments to a belief in the possibility of peace. 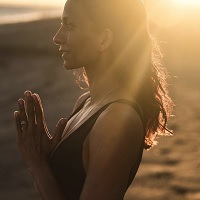 Insiya Rasiwala-Finn is a writer, a yogi, and a mama exploring the modern eco yoga lifestyle. She has written on holistic health and travel for magazines such as Asia Spa, Co… Read full bio