Yesterday, December 15th, the COP was abuzz with new and fresh energy. Wait-time in the registration line went back up to four hours, chairs became scarce real estate in the common areas, and shouting and singing from various youth delegations could be heard throughout the packed halls. The public pressure on the policy makers to come to a strong, binding deal gets ever stronger, after a 50,000 person march on Saturday (which ended up with 600 Black Bloc-types getting arrested for arson) and 350 youth delegates in orange shirts demanding for 350 ppm.

The police are in force, probably more of them than I’ve ever seen. They all wear the label “Politi”, Danish for “police.” A mayor of a major city joked, “I want to re-name our police ‘Polite’!”  Fortunately, he’s not kidding: they are very polite. [Though Naomi Klein disagrees ~ ed.]

The pitch is getting feverish, and it will only continue to crescendo.

Yesterday, the developing nations walked out of the negotiations. Just plum up and walked out, in order to make a statement. Unfortunately, they did it during a rather procedural part of the negotiations, so their statement didn’t exactly land with much force—likely just more annoyance. However, it does reflect that things are heating up.

AOSIS, the Alliance of Small Island Nations, seems ripe to do a similar action of their own—however, I haven’t heard of any direct plans to do so.  I’d love to see AOSIS and the African countries—among the most vulnerable nations to the effects of climate change, particularly sea level rise and desertification, respectively—effect a similar, stronger action, together.

Unfortunately, but perhaps expectedly so, the negotiations have since been closed off to NGO’s and observers—only country party delegates (the Pinks, see first journal entry below) are allowed to enter the negotiating rooms. Not only that, but the Bella Center has a maximum capacity of 20,000 people—and 36,000 are registered to show up this week. Thus, the NGOs have all had to cut their delegations by two-thirds. By Friday, it is expected that very few NGOs will be able to enter the center, as some 90 heads of state finalize what we hope will be a strong agreement.

I’d say, if nothing else comes from this conference, that at least this has been one of the most impressive and cohesive demonstrations of humans coming together for the common good. People may rail against the shortcomings of market-based strategies such as carbon regulation, and the promotion of self-interest such solutions can instigate, but—talking directly to many of the people here—I firmly believe that most people are coming from a place of interest in the common good and for our planet.

It is perhaps sad, but also poetic, that this arises from a place of crisis; but perhaps this is the necessary existential crisis of humanity that we need to bring us to a greater recognition of our innate interconnectivity.

There is an interesting division, almost a class distinction, between people at COP’s. A lot of it comes down to the color-coordinating of the badges. The country Parties have Pink tags, the Inter-Governmentals have blue, Press has orange and NGO’s lowly yellow.

I’m a yellow….worse yet, I’m a yellow with a complicated agenda—I’m trying to garner support for a new technology for adaptation and mitigation: biochar. If you want to know what biochar is, please ask Google, because that is another (longer) conversation. My point here is, when you’re a yellow that is asking for the pinks to consider yet another consideration on their already-overflowing plate, you have your cards stacked against you (to the tune of about 200 pages—as in, the core negotiating text that everyone is working from).

So, you must drink a lot of coffee (or mate!) and be, generally, indefatigable and in-discouragable. It’s that kind of perseverance that makes change actually happen. Real change. The kind of change that alters the way our human institutional infrastructure operates in 50 years’ time. The kind of change that your great-grandchildren will one day forget to thank you for.

Commitment to your vision is paramount.  In fact, if I were to quantify it, I’d say that 10 pounds of commitment is equal to 100 pounds of enthusiasm equivalent. But together, they are a recipe for success, whether you’re a pink, or yellow…or whether you’re reading this from home, offering your own essential contribution to the world.

Wishing you the best from Copenhagen,

Lopa Brunjes is a writer-businesswoman-policywonk-yogini who got her start working in the biochar field 2 1/2 years ago.  She’s now passionately committed to making biochar into an example of industry-done-right (for once!), and a solution to climate change, energy, and soil fertility.  When she’s not biocharing, Lopa can be found cooking, dancing, or yogaing. 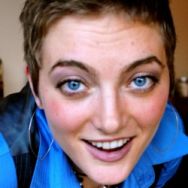 Lopa Brunjes is a visionary businesswoman, biochar geek, and singing yogini with a penchant for being wonkish, dancing in the car, and high-fiving strangers. She counts her bl… Read full bio