Your Body Type and the Ayurvedic Doshas: Vata, Kapha, and Pitta Energies

The three Ayurvedic Doshas (body energies — Vata, Kapha and Pitta) determine greatly how you look and feel throughout the seasons, and throughout your life. You have all three elements in your body-personality but most people have one or two dominant traits. (So stop body shaming and cut yourself a break.)

There are some simple ayurvedic reasons you and I may never look as skinny as Tara Stiles. No matter how much yoga we practice.

The simple reason for this is found in the sacred tradition of yoga’s sister science, namely Ayurveda.

The Three Ayurvedic Doshas and Their Body Types

According to Ayurveda, there are three basic body types. These three bodily humors can manifest themselves in a variety of forms, and very few of them look anything like most yoginis featured on the cover of Yoga Journal. 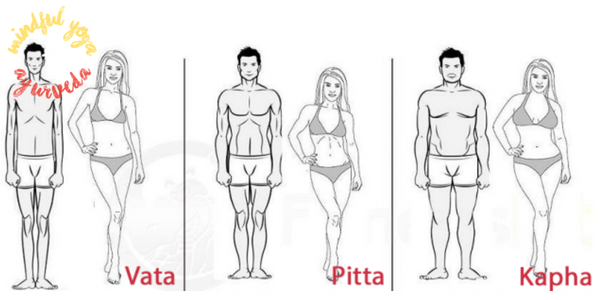 The physical appearance of vata yogis: they are either tall or short, non-muscular, with thin and bony limbs and have a quick gait with short, fast steps. In other words, vata yogis can twist their bodies into just about any asana position practiced in a hatha yoga studio this side of the Ganges river!  Tara Stiles seems like your typical vata yogini.

*Grab your girlfriends for vinyasa & vino with Dahlonega Spa Resort’s Wine & Wellness Package in GA – book now and get a discount when you mention Elephant.

Pitta yogis have a moderately well developed physique with muscular limbs and a purposeful, stable gait of medium speed. Their bodies are often hot and sweaty, so steamy hot Bikram classes are actually not the best for their hot-tempered pitta personality. Better for them to do asanas in an ice-skating rink!  Rodney Yee seems like a typical pitta yogi, at least physically.

See also: The Right Essential Oils for our Doshas

Kapha yogis have a thick, broad, well-developed frame, large bones and muscles and are relatively short=statured. They may have difficulties siting in full lotus or pulling both feet behind their ears, but they are good-natured and will fail with a considerate smile. Neem Karoli Baba, with his rotund body, might have been a kapha yogi.

But of course, we yogis do not always fit neatly into these three physical categories. Because there are actually many variations of these body types, including pitta-kapha, vata-pitta, vata-kapha, and pitta-kapha-vata.

The point is: if you have a pitta-kapha body (like myself), you will never, ever look like a string bean…or a wonderful yogini the likes of Tara Stiles. Never, ever.

You may fast and eat nothing but fruits and vegetables for years, but your hip bones and your hips may, if you are a pure kapha, for example, remain as large as a beautiful horse’s ass—even though you have less than an ounce of body fat.

Hence, when I started yoga, it took me a while to get into lotus pose. And once I was able to get into it, I could barely get out of it! All this sweat and agony due to my large bones and muscles, while my vata brethren in the ashram in India could sit in lotus all day without batting an eyelid.

*Mind, Body + Spirit packages at Pura Vida Retreat & Spa in Costa Rica – book now and get a discount when you mention Elephant.

Consequently, siddhasana, or half lotus, has become my favorite meditation pose, because I can comfortably sit in it for long periods of time. Indeed, this royal seat of asana is preferred by many yogis for various higher meditation practices.

In other words, it does not necessarily make you less of a yogi because you are unable to sit in lotus pose for hours on end without feeling pain. Yoga is not just about physical looks and abilities.

Many great yogis looked like pot-bellied weirdos and hardly ever practiced yoga asanas in the first place.

But is this physical and spiritual diversity reflected in the ads and the photos in yoga magazines today? Hardly. More like: hardly ever! Most yogis or yoginis (yes, they are mostly yoginis) featured in magazines are skinny and bendable saplings of either a vata or a vata-pitta nature. In other words, they tend to look like Tara Stiles.

But (fortunately) most yogis look like you and me, with bodies that reflect the whole ayurvedic spectrum of human body types.

Indeed, yogis come in all shapes and types. Some small and thin, some short and relatively large, some tall and shaped like a plump pear, some tall and skinny like a young tree, some medium and muscular like a pit bull. And we are all yogis, and we are all beautiful! Yes, indeed!

Shouldn’t our yoga magazines and books better reflect this yogic and Ayurvedic reality?

Watch this video on the Ayurvedic Doshas:

Find the Perfect Workout for Your Body Type (Dosha).