Revel in the Leisure Life

My life goal was to become proficient at as many leisure sports as possible and I pursued it with passion.  After a rendezvous in a dusty truck stop I tossed my pack into trailer that was loaded with weeks worth of climbing and living gear.  It was pulled by a van loaded with weeks of sand coated climbers and seasonal misfits.

We began roaming the foothills and peaks of the Dragoon mountains of Southern Arizona including the intriguing and endless granite spires of Cochise Stronghold. The cluster of rocks, some hundreds of feet tall, literally juts out of the desert floor like a giant fort and was where Apache Chief Cochise launched his last stand against American forces in 1861. We spent our time playful but also observant of the significance of the area that we were part of. Each nook and cranny revealed a crack, a line to climb, tunnels to explore, new routes, spires to amount, and pictographs etched and painted by any of many unknown predecessors.   The Stronghold is as good as it gets in the world of grown-up playgrounds and being there brings out a stunning sense of wonder in any jaded road tripper.

In the evenings after climbing we would fall asleep where we were among the rocks or return to our camp in the grassy fields that surround The Stronghold.  There in the low lands we continued to play.   We swung on ropes and webbing and in hammocks and port-a-ledges suspended in the trees yet not far from the ground.  Being suspended just felt right.  The sunsets were as warm as a jacuzzi but cooler than the hot desert days.  The brilliance of the evening light was the sun’s way of apologizing for the brutal midday rays.
In the fields we dressed up and danced, drank, lighted fires, made music and made up games. We found new skills and leisure activities to master – we spent every day exploring and experimenting on the rocks and returned to camp to do the same.  “Yeah but can you juggle these?” the challenge, “or try this, that was cool.”  And so it went.

Days went uncounted and the weeks nearly did too.  At one point our obscurity began to improve and our amusement became a spectacle.   One of us had just mastered juggling rocks while hoola-hooping on a slackline but it nearly went unnoticed because the other was busy juggling flaming sticks dipped in white gas.
At other times stillness was what amazed us. In the mornings we would drink tea in the immense fields and there was an evening that we watched the sun slide into the ground from atop Sheepshead mountain after climbing the route “Peacemaker”.  It was as if we were the only ones who could see the sunset that day.  I wrote my favorite Haiku in the summit registry and we hiked off in the dark.

Aspen leaf
Falling down
Showing side to side

Somewhere on interstate 10 while heading West toward Tucson in the expanse of desert we crested the only rise hiding our view for the last 30 miles.  What we saw on the endless road through the endless desert was that it was now choked with an almost endless line of cars that were not moving. People were milling around in the heat outside of their vehicles straining to see what was causing the road to be completely closed in our westbound direction.   We got out of our van to catch up with the gossip that was moving up and down the line or cars.  Word quickly came back that a construction spill littered the road and it might be 45 minutes to an hour before it can be moved.  With that, the trailer door was yanked open and the cooler and camp stove were brought out (for grilled cheeses) along with the hoola-hoops, guitars, poi, juggling sticks, wiffle balls, frisbees and hackey sacks.  We were masters of recreation and an unforeseen opportunity to practice our leisure sports was as good as any.

A truck was turned around so the slackline could be set up between the bumpers. In our crusty trail weathered duds we carried on among the cars, the families, and other motorists along the interstate.  They got out, looked on with smiles and were soon catching frisbees and footballs as well.  We inadvertently held the first and probably only Leisure Sports Roadshow.

Timeliness breed nostalgia and as quickly as it began the gear was put away and cars in the distance began to move again.  We climbed into our cars and rolled on with everybody else without knowing what there was to find next. 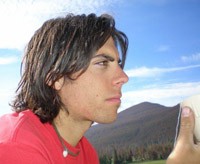 John Cameron writes from coffee places and green spaces while focusing on celebrating the seasonal. His art is inspired by travel and all things wild and his bag is never unp… Read full bio