We are All Gonna Die!

Well, eventually, in any case.

Yes, of course you know that. Intellectually, at least. But are you certain that you have let yourself process the full import of your own mortality? Take a moment to check in and ask yourself if somewhere, far behind your frontal cortex, there isn’t a tiny part of you that believes death is just something that happens to everyone else.

Most people begin to think about death around their early teens, and there is a very typical stage of believing – even if outwardly we just joke about it – that we will be the ones to figure out how to live forever. Most of us eventually settle away from such illogical ambitions, but very few end up doing much more than suppressing our feelings about death, in much the same way that we procrastinate on thinking about work that we don’t have to do until later. We know it’s coming, but we’d rather not think about it right now. I’m just too busy today. And tomorrow isn’t looking very good for me, either.

When I told my girlfriend about the topic of my blog this week, she said that, while she doesn’t understand why, she simply is not afraid to die. When she checks in with how she feels about her death, she doesn’t feel anything at all. While I do think it possible that some people actually have no fear of dying, my own experience leads me to suspect that in many cases we simply have not developed a relationship with the inevitability of our death. After the teenage stage of feeling vertigo at the thought of my eventual non-existence (if that’s even how it works), I went through a long phase of feeling nothing at all about it. It genuinely felt like I got over it by growing up. Then came meditation, and I started noticing a tiny stirring, somewhere deep in my gut. Something like the old terror at the thought of being buried in the earth. It wasn’t until I picked up climbing as a hobby that I realized: my rational mind may be beyond fear of death, but my body certainly does not want to die. Falling off the wall, uncertain of whether my harness would or would not catch me, made that crystal clear.

Sometimes it seems that life is flowing along to help us avoid facing the inevitability of death; at other times, it seems like it is conspiring to make us face it – and when it rains, it pours. A dear friend of mine recently lost a family member to suicide. Having struggled with thoughts of suicide as a teenager herself, it wasn’t only the fact of his death that hurt, but more so the manner of his death. Then just last week, she got to witness the passing of a family friend who had been fighting cancer. Fighting is exactly the right word to describe her relationship with cancer and death – she battled it tooth and nail for years. Then, about a week before she died, she simply accepted. At the time of her death, my friend’s parents were at her bedside, each holding one of her hands. She said: “let’s do this,” and a moment later she exhaled, never to inhale again. There was such great peace and grace in her passing, that my friend – albeit understandably saddened – was touched and encouraged. Two deaths so close to each other; two passings that seem so different – one at his own hand, the other surrendered to her terminal disease – yet both remind us that we might not always wish to avoid death. There might come a time when death may be a release from suffering.

Another friend of mine lost her mother last week. The mother was very elderly, and had been slowly moving towards death for quite some time. My friend had become somewhat exhausted at taking care of her mother, and later felt guilty that there was a subtle sense of relief at her mother’s passing. The night that her mother died, she was at dance practice, doing what she loves to do most, and was surprised that despite their close energetic connection, she hadn’t the slightest psychic indication of her mom dying. Later, when she carried her mother’s ashes out of the mortuary and into her car, she remembered how her mother would walk so slowly, and how much she wished sometimes that she could just carry her. Here, now I am carrying her, she thought with a smile. And she is so, so light.

The last time I got to see my teacher and mentor, we spoke a bit about the resurgence of my fears around my mortality. Then the topic changed, and as we always do, we talked about lots of other things as well. At the end of the conversation, he rose from his seat, and with great earnestness in his gaze and fastness in his arm around my shoulder, he said: “you are going to do great!” Confused, I asked if he meant in my relationship or with my work. “No! I mean when you come to die. Yes, you will be afraid, and it is a tremendous challenge – but you will see that it is a wonderful opportunity, an opening… and you are going to do just great!” I looked into his eyes. Silently, unsure of what he could possibly mean by that – or how in the world he could possibly know – I just nodded. I guess I’m going to do great.

In the meanwhile, what helps me most with my thoughts about death is this old Zen koan:

A Zen master came to die, and his disciples surrounded his death bed. One of them carried a block on which to write the master’s traditional, four-line death poem. The dying master spoke slowly:

I come from luminance,
I return to luminance.
What is THIS?

After a moment of silence, the disciple looked up from his writing and, hesitant, he said: “master, we are missing a line…” The master sat up in his bed, and in a voice like a lion’s roar exclaimed: 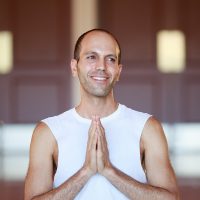