Yoga in Football and Football in Yoga.

Folks in Pittsburgh, Green Bay, and all over the nation are gearing up for the Super Bowl on Feb. 6th. Two of the most storied franchises in NFL history will be squaring off on the biggest stage, Pittsburgh fans sporting their Terrible Towels, while Green Bay fills the stands with its Cheese Heads. Americans will gather with family and friends to eat, scream, and jump around the TV.

Football, with its fast-paced action and brutal hits, is undeniably the nation’s most popular sport: last year’s Super Bowl XLIV between the Colts and the Saints attracted 106.5 million viewers, earning the distinction of being the most watched television program in history, eclipsing even the final episode of MASH. As a fan and former football player, I can’t help but think that we are all, in some fashion, addicted to inflicting damage on ourselves.

Players beating the crap out of themselves and each other.

Behind the scenes, the sad reality is that NFL players are beating the crap out of themselves. For these “weekend warriors,” a career in the NFL knocks a good twenty years off of their
lives. According to studies in the US “men who play five or more years in the NFL have a life expectancy of 55. . . For linemen, perhaps due to their size, the life expectancy is 52.”

The good folks who are watching out for the players’ health attribute this shortened life-span to:

The intense physical beating on their bodies.

The biggest danger of all: head injuries.

I was one of these players, kicking for the New York Jets, the Indianapolis Colts, and the Detroit Lions. As a kid, I kicked hundreds of balls every week, even in the harsh winters of northern Pennsylvania, where I trudged through three feet of snow with my bag of balls and my cleats to kick on an ice-covered field. By my fourth and final year in the NFL, my body was falling apart. Lower back and hip pain left me crawling on my hands and knees most mornings just to make it to the bathroom. Sometimes a simple movement like changing the radio dial in the car was enough to send jolts of pain shooting down my leg. The doctor for the NY Jets told me my hip flexors had degenerated—I was just 25 and had never heard that term before, but I figured any word that started with “de” wasn’t good. Twenty years of training and competing had wreaked havoc on my body.

Yogis beating themselves up.

Even as yogis, we are susceptible to pushing ourselves beyond our limits. Many of us beat ourselves up physically and mentally: obsessing, wanting, accumulating, comparing, contrasting, and ultimately competing against others and against ourselves.

As a yoga teacher, I see it in my students’ bodies—eyeballs popping, veins bulging, people making faces as if they’ve been constipated for a month. One student even gave me the middle finger once. It isn’t pretty,
and I know I’m guilty of pushing hard like this from time to time too. Many of us are initially attracted to the styles of yoga that can give us some sort of “ass-kicking workout”. But if we stick with it, we discover that there is something mindful in this “workout,” that the practice can literally “bring us to our knees.”

The longer I practice the more I find myself modifying. Age is certainly a factor– I just hit the big 4—0. But I hope it’s also the result of a little wisdom. For me, practicing yoga is becoming more about healing my body and mind, and not worrying so much about strength. Forget about “getting ripped.” For some of us, it takes an injury to get to this point, whether physical, mental, or emotional. But once we do make the commitment to heal ourselves it is incredibly liberating!

Gentleness is starting to gain traction in football.

For years, the NFL’s Front Office turned a blind eye to players’ health and wellness, just as most of us ignore what our bodies tell us day to day. Luckily, players are waking up to the reality of what they are doing to themselves: the fact that the quality of our lives is most important. Because players and their supporting physicians are speaking up, the NFL is taking players’ safety more seriously now, recognizing that an all-out “balls to the wall” 110% approach isn’t sustainable. Last year, the NFL inserted new rules to support this new yet long over due movement and focus on players short and long term safety and health.

As a matter of fact, most NFL teams now sponsor formal yoga programs for their players. My wife and I worked with the Steelers, and for many of the players, yoga gave them a mental and physical edge on the field. But what was inspiring was the way some players began to see yoga as a way to live a longer, healthier life—as a lifestyle.

This year, on the Super Bowl field, you’ll see yogis Troy Polamalu—easily regarded as the best Defensive Back in the NFL—and Ben Roethlisberger, quarterback for the Steelers. Polamalu has been practicing yoga for years, and he’s convinced that conventional weight training does more harm than good. In fact, Polamalu hasn’t tossed around dumbbells and barbells for years. Watch him on the field, and you’ll see the yoga in Polamalu’s football: he uses his intuition; he plays intensely yet appears calm at all times.

Ben Roethlisberger practices yoga too. During an extra long off-season due to his off-the-field personal issues, Roethlisberger had extra time on his hands. He picked up a yoga mat and started practicing with his mom who is a yoga teacher in Ohio.

Maybe it’s not who makes the most money in their life, Maybe it’s who enjoys their life and lives the longest.

Sounds like something a yoga teacher would say, but those are the words of a former lineman from the Tampa Bay Bucs, Brad Culpepper. Brad weighed almost 300 pounds when he retired, and he was riddled with injuries. But he’s gotten healthier, dropped 80 pounds.

Still, many players aren’t so fortunate. Lucky for me, I discovered yoga near the end of my career, and I’m convinced that it has restored my body and added years of mobility to my life. It has also taught me to try to be gentle in everything I do, think, and say.

Truthfully, I wouldn’t exchange my years playing football for anything. In the end, I learned invaluable lessons about moderation and gentleness. Letting go means connecting to your inner wisdom. Yet, I believe a different approach to competitive sports—one that focuses on moderation and balance—is possible. Going easier on ourselves does not mean giving up or quitting. Let’ s just call it pacing ourselves.

So Namaste to all my fellow yogis, yoginis, and football fans around the world. Good Luck to both the Cheeseheads and to the Steeler Nation. Looking forward to watching football
and yoga on Super Bowl Sunday. 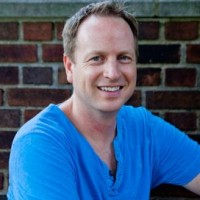 Sean Conley, along with his wife Karen, founded the Amazing Yoga Studios in Pittsburgh, PA. They are co-authors of Amazing Yoga: A Practical Guide to Strength, Wellness, and … Read full bio