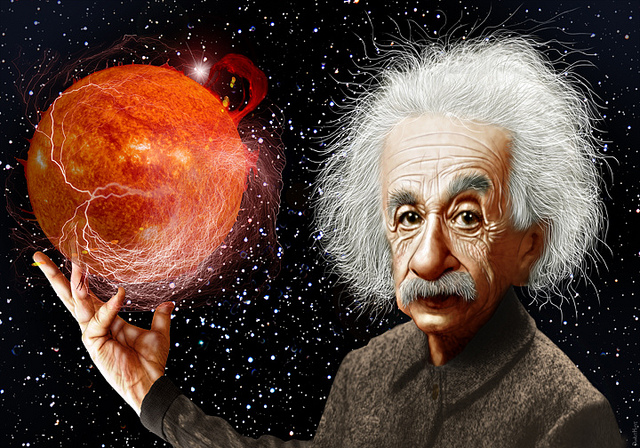 A few weeks ago, I caved and became a vegetarian. There’s only so much I can learn about the horrors of all facets of meat-eating before turning to the other side.

Because of my recent conversion, I was particularly interested to find this list of the world’s most incredible scientists, mathematicians, and inventors, who are all vegetarians:

2. Leonardo Da Vinci, physicist and artist who made important discoveries in hydraulics, optics, and mechanics.  He was so fervent about vegetarianism, he would buy caged chickens and set them free.

3. Srinivasa Ramanujan, one of the greatest mathematicians of the past 1,000 years.

4. Nikola Tesla, helped devise the AC (alternating current) electrical system used to power modern civilization.  He lived on custom-ordered, meat-free meals at the Waldorf-Astoria Hotel.  Regarding the benefits of vegetarianism he wrote:

On general principles the raising of cattle as a means of providing food is objectionable. It is certainly preferable to raise vegetables, and I think, therefore, that vegetarianism is a commendable departure from the established barbarian habit. That we can subsist on plant food and perform our work even to advantage is not a theory but a well-demonstrated fact. Many races living almost exclusively on vegetables are of superior physique and strength. There is no doubt that some plant food, such as oatmeal, is more economical than meat, and superior to it in regard to both mechanical and mental performance. Such food, moreover, taxes our digestive organs decidedly less, and in making us more contented and sociable, produces an amount of good difficult to estimate. In view of these facts every effort should be made to stop the wanton, cruel slaughter of animals, which must be destructive to our morals.

5. Thomas Edison, considered one of  the greatest inventors in history.  He wrote:

“[Vegetarianism has a] powerful influence upon the mind and its action, as well as upon the health and vigor of the body. Until we stop harming all other living beings, we are still savages.”

6. Albert Einstein, the greatest scientist of the 20th century, widely regarded as one of the most ingenious men of all time. On vegetarianism, he said:

“Nothing will benefit human health and increase chances for survival of life on Earth as much as the evolution to a vegetarian diet.”

“Our task must be to [widen] our circle of compassion to embrace all living creatures and the whole of nature in its beauty.”

And the day he became a vegetarian, he wrote in his diary:

“So I am living without fats, without meat, without fish, but am feeling quite well this way. It always seems to me that man was not born to be a carnivore.”

7. Edward Witten, viewed by many as Einstein’s successor, best known as the world’s foremost string theorist and mathematician.

8. Brian Greene, Witten’s foremost protégé (he was on The Colbert Report last week).  He refuted Einstein’s theory that space can stretch but not tear, and by age nine, could multiply thirty-digit numbers in his head.  In an interview on science, morality, and vegetarianism for The Supreme Master Ching Hai News, Greene stated:

Q: Why do you think so many of the greatest geniuses have been vegetarian?

G: From my limited experience, vegetarians typically are people who are willing to challenge the usual, accepted order of things. Moreover, they’re often people willing to sacrifice their own pleasures in pursuit of what they believe is right. These same qualities are often what’s needed to make great breakthroughs in the arts and sciences.

Q: Why do you think other scientists are still not vegetarian?

G: I would ask, more generally, why the vast majority of people are not vegetarian. I think the answer is that most people don’t question the practice of eating meat since they always have. Many of these people care about animals and the environment, some deeply. But for some reason—force of habit, cultural norms, resistance to change—there is a fundamental disconnect whereby these feelings don’t translate into changes of behavior.

Q: What inspired you to become a vegetarian?

G: Quite literally, it was a dish—spare ribs—that my mother cooked when I was nine years old. The ribs made the connection between the meat and the animal from which it came direct; I was horrified and declared I’d never eat meat again. And I never have. Going vegan happened later. I visited an animal rescue farm in upstate New York and learned much about the dairy industry which was so disturbing that I could not continue to support it. Within days I gave up all dairy.

9. Alan Calverd, UK physicist who recently made headlines with the following statement about global warming and the vegetarian lifestyle:

“Adopting a vegetarian diet would do more for the environment than burning less oil and gas.”

Brian Greene on the Colbert Report, mentioning his veganism.