Extraordinary Heroes Are All Around Us

Like a hairdresser or bartender, the stories and secrets entrusted to me as a yoga instructor range from annoyingly trivial (do you think we should paint our deck Martha Stewart’s “Clay”?) to overwhelmingly enormous (my best friend is dying), and everything in between. And I mean everything. When I first met my husband, he couldn’t believe the number of emails and the amount of pre- and post-class counseling that went on. The interesting thing is “counseling” isn’t part of a teacher-training course nor is it part of my job description. And I’m certainly not a certified counselor (unless you consider training and certification to mean watching Dr. Phil a couple of times—or was it Dr. Drew?).

I think sometimes we all need a safe place to smooth out our crumpled lives, a place where we can reveal our warts and wrinkles and not feel judged. Where better than a yoga studio, where everything is designed to make the experience as soothing and gentle as possible, almost like a womb? And since we are certainly smoothing out our buckled bodies and minds with our yoga I can see why it would be a natural progression to reach out to the instructor (“if she’s not going to judge me for my torn Senor Frog’s t-shirt, maybe she won’t judge me when I tell her I’m considering giving up my job to travel around the world”). Ultimately I’m honored that anyone would be convinced I might be a helpful partner to get them through the challenging moments in their lives. Sometimes I’m astounded at the difficulties some of my students are dealing with, and yet I’m grateful for the brave, inspiring warriors who have graced my path.

Yes, there are the emails and whispered conversations complaining about pretty much everything—the person next to them was breathing too loudly, will I tell them not to so in the future…somebody’s shorts were too revealing, tell them not to wear them ever again…so and so’s feet are horrible, insist that they get a pedicure.

But some of the stories are so powerful and transcendent, they have reached into my life and left an indelible imprint. Here are a few of those stories.

When she came on retreat to Mexico, Sherry was terrified of the bugs, the food, the accommodations (which were luxury) and the sun. While everyone else was raving about the place, splashing in the surf and sipping hibiscus water, she found nothing acceptable. It was 6 days of misery in paradise. Never would I have foreseen what she proved capable of 2 years later. After her boyfriend proposed with the only sized diamond she would allow, they were married and had a beautiful baby boy. Three months pregnant with her second child doctors discovered stage four breast cancer. It was strongly recommended that she abort the baby, as they had to do extreme chemo and radical treatment. She refused and bravely entered uncharted waters receiving the treatments while the baby grew inside her. During this time she would often cyber chat with me. She was not able to physically practice, but the yoga she was doing, breathing through this unbelievable situation, was far more sophisticated than I could ever teach. She, who had not been particularly focused on her mat, was unwavering on this battlefield. She wanted to find the deeper aspects of her yoga, the “spiritual” ones, and we gently wandered through what that might mean to her.  Miracles can be challenging to reconcile. The baby was born healthy and she is cancer free. She is grateful, but true to form, she is not afraid to point to what is unsatisfactory. I learned from Sherry that there is a warrior in all of us, even those of us who would appear to need to outsource such bravery. We don’t know what we are capable of until we are challenged to the limit. I learned that inspiration is not precious with the string section swelling and the lighting just so. It is human, and impatient, and still true to who it always was.

A statuesque blonde and a shorter, older-than-her screenwriter husband are not uncommon in Los Angeles. When I arrived at the door for their first private session, Seth and Elaine both had cigarettes in their hands. “You’re probably going to need to put those out before we get started,” I remember myself saying. They were fun and funny and we practiced outside next to their babbling brook. But things were not all that they seemed. Checks started bouncing, and hushed cash was handed to me by the blonde in secret. There was evidence of fighting, and the drama began to seep into our sessions and scheduling. After a while I’d stop hearing from them all together. This became a pattern that continued over a few years, and they moved several times as well. Then, after months of not hearing a thing, Seth found me and wanted to practice on his own. They were divorcing, he was devastated and felt deceived. It seems the money she was supposedly using for their taxes and bills had ended up financing her drug habit instead. Heartbroken and broke, he crawled back onto his mat one more time looking for some answers. It was slow going at first, lots of talking about her in broken record style during the hip openers, but little by little he found his breath again. I pressed him to come to the group classes because I knew the community feel would really be the missing piece this time around. I look at him often in the front row of a crowded class now, enjoying his tribe and beaming. Somewhere along the way he stopped smoking too. Yes, we are looking for someone to hear us, but we want a place to belong too…a place where we can shine inconspicuously with the other lights on the tree while we trudge through what comes at us.

Her limbs twisted by MS, she wandered in and started to set up. I was concerned—mine is a rigorous class, and I wanted to protect her without making a spectacle. It is a line a teacher walks with any new student, but her circumstances had me feeling all the more conflicted about how hands on or off I should be. To my surprise, I marveled at her customized poses, and how well she knew herself. Then, when she called me over to spot her in a headstand, something I would not have imagined, I realized something. She was more aware of what her limitations were than most of us, but she was also more aware of what they weren’t. She was spectacular, explaining to me that because her right arm couldn’t bend correctly, she would need me to adjust my stance to best support her. She didn’t need my counsel—what she needed was for me to find the faith that she already had.

Faith can be hard to find on our own.  We fumble in our darkness, and then someone holds up a flashlight to help us find our way. When someone else believes in us, we begin to believe in ourselves—and before you know it, we are holding up the flashlight for someone else.  We are all warriors with the power to illuminate one another and when we do we are as beautiful as the stars in the sky. 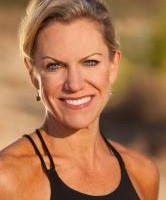 Andrea Marcum, a Santa Cruz, California native, with a background in competitive gymnastics, began teaching yoga in 1999. She opened U Studio Yoga in Los Angeles in 2006. In a… Read full bio