Such an intriguing discussion is happening right now about Nancy Alder’s post , Fight the Power! A plea to Yoga Journal, taking Yoga Journal to task for the cover models they choose (or don’t!)!  I was going to comment over there, but then realized my response was getting irritatingly long for that format.

To save your eyesight, and perhaps spark another thread of the conversation, I’d like to share my perspective on it all here.

I come at the idea of yoga magazines lacking real people and real bodies on their covers (and we can probably all agree that in general, they do) from four directions that apply here: I’m a former journalist and someone who still writes about yoga for many national publications, including Yoga Journal, a longtime student of yoga, a woman who had both self-esteem issues and also ‘modeled’ for yoga magazines–and a teacher who would like to see the vast majority of my students reflected in our leading editorial pages.

There is much to be said for wanting to see the everyday and diverse yogin or yogini mirrored on the covers of our magazines. I think that YJ and such would benefit from even more of this. I personally would like to see a full-figured (or at least not a size 4), fit, radiant yoga teacher or reader gracing the front of YJ –or any magazine. It’s a new frontier, because, yes, we don’t all have to be beanpole thin to be representatives of fitness. Let’s take a moment to remember that yoga is traditionally not only about how you look, but how centered, compassionate and self-realized you are. Yoga Journal promotes more than just the values of fitness in their pages and I’d like to see that mirrored more on the outside when possible. Otherwise, they could just call it “Yoga BODY Journal” and be done with it.

Fat-free is out: healthy is in, at least, one would hope, in the yoga world. That knowledge has not yet reached the cover of Yoga Journal, but I don’t think they are entirely to blame.

What Elephant Journal stated in the comments of Nancy’s article is true, at least from the editorial side. As much as we would like to think that a mom in the sandbox would be a great cover, or that I think that me  (or anyone) with my back to the camera is a cool statement, the simple reality is that those types of images may make people look twice at the cover…but they traditionally don’t make them buy the issue. For better or worse, YJ knows that in order to get readers to take the magazine home and become exposed to the vast world of deeper content inside (much more diverse that their covers may be, we all must admit), they need to hook them with an inspiring first impression. I do this all the time, drawing people in with my “core strength” brand, and then giving them the full spectrum of what it takes to release outer coping and spark inner empowerment on all levels.

If I promoted my workshops as “a bunch of talk about healing your issues, then some yoga”, two people would show. I would rather have 40 eager yogis there, most of whom come up to me afterward and say “I had no idea this was going to be about all of this–but I’m SO glad it was.”

Yogis and editors alike who are also interested in spreading the healing message of yoga to the masses, therefore creating positive changes in the world more quickly know this:  you can use mass appeal in order to open more people to the real meat of the teaching. When used reverently, the ‘commercialization’ of yoga can become one of the most effective ways to get students in the door who might not otherwise have come anywhere close.  I’m all for consciously making yoga into a simple effective tool anyone can use and showing them leaders in the field who are vibrant and beautiful in some way.

The main question this all leads me to ask is not why Yoga Journal doesn’t usually choose older, male or curvy cover models, but why don’t we buy them when they do?

It’s not that covers, like John Friend, who is a revered, older, and male yoga master, weren’t created, they were…and they didn’t sell. So, why aren’t we supporting them if that’s what we supposedly want? In this current climate, the Buddha himself wouldn’t get his fat, lucky belly past the first junior editor.

Most people, statistics show, purchase books, magazines and programs that promise them an improvement, or a transformation, not those who mirror them as who they currently are. When it comes to bringing the message to them, it’s that first click, the turn of the page, the financial commitment to the workshop that matters most, and anyone who truly wants to teach as many people as possible will at least consider that proven fact. The media didn’t solely create this: consumers created it by responding better to certain images, words and concepts. It’s psychology 101: we like pretty, symmetrical people. We are drawn to them like bluebirds to a shiny gum wrapper.

If we want to get to the root of the problem, we might look at something that’s even more epidemic than lean, young white girls on the cover of yoga magazines and dig all the way down to the reason why we support those teeny weeny yogini images instead of the moms or imperfect bodies: our often dysfunctional core relationship with ourselves. I include myself in this, as someone who may appear like I could be on that cover right now, but in fact who struggled with eating disorders and self-hatred for years until yoga taught me to remember myself on a profoundly healing level. I have a career because people are so often challenged with reclaiming their own self-worth, and I can show them the road home. Until that transformation occurs, however, if it ever does, we are a country full of people who don’t eat well, think or choose constructively, or even like themselves very much.

Think about it: if a woman, or a man for that matter, truly felt like they were enough, and as fabulous as any cover model even with their bigger body, or the age, or the normal job, or the growth process left to do, or whatever, then they would be able to revere a normal-looking, perhaps cellulite-friendly yogi on the cover –and they would be inspired by what that person has accomplished instead of how superficially perfect they seem to be.

Instead, too often we continue to covet the passion, creativity, passion and health of our models, yet personally engage in the self-critical, anxious, limiting, destructive, co-dependent or other lack-oriented behaviors in which many people practice on a daily basis. This disconnect creates a media who responds to our quest to deny our own human imperfections.

I’m not against having fit people on covers. Yet I would also like a dash of reality thrown in once in a while (god forbid we ever see a stretch mark or a belly roll. Eek!). The fact is, if we don’t think of ourselves as the rockstar, then seeing ourselves represented on a cover will never be as intriguing as seeing some movie star, a model or a skinny, sexy yoga chick. Sex sells, yes, but when it’s mostly women buying, I would take a shot in the light and say that readers not feeling good enough about themselves just as they are is what really drives us to pick up something that shows us how happy we could be…if only we weren’t this, now…and that’s something only we can remedy.

The difference that Yoga Journal could make, in my opinion, is to show more cover role models–real-world people who are rocking the world in their own unique ways. Maybe it’s time to trust that readers can recognize inspiration–and connect to our own aspiration just as strongly through someone who lives more like a model yogi…and maybe looks less like a model.

To value these new-generation covers,  however, we must each be simultaneously focused on the pure bliss that arises from doing our own best work–and knowing that we are everything we could ever see in another: beautiful, confident, free. This opens us to buy magazines because the insides could help us farther along our paths, not because the shiny, happy cover makes us feel like we could be someone else for a while.

I agree with Nancy that there is more YJ, and all the media outlets like them can do to broaden their perspective of the “ideal” yogi, but If YJ puts a juicy woman on the cover, y’all better run out and buy five copies. Otherwise, the revolution will go un-rewarded. If we want them to do it, we have to support it. They are a business too, conscious though they may be.

I recall in the recent past seeing a black woman on the cover (the awesome Faith Hunter), a paralyzed man (the equally awesome Matthew Sanford, big-bodied yogis, older yogis and more (haven’t seen a redheaded me in there yet, but oh well). This magazine is far from perfect…but they are far from imperfect as well. I think we’re getting closer to not only wanting a new cover look for Yoga Journal and the like, but also to our own personal self-acceptance. This revolution arises from our core relationships becoming healthier, and this is a sign I love to see. 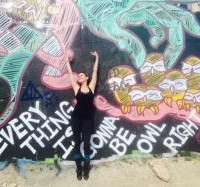