For 15 years, Zen Master Bernie Glassman and the Zen Peacemakers have lead multi-faith, multi-national retreats at Auschwitz in order to bear witness to the darkest parts of humanity.  I attended my first retreat in June 2010.

What follows are a series of posts chiseled from my daily journals of the experience.

You may wish to read my posts on previous days (prologue, day one & two, day three).  Photos by Clemens M. Breitschaft, taken with his iPhone.

I started the day, early in the morning with my first experience teaching yoga.  I encouraged participants to focus with intensity and develop an intention to maintain elevated consciousness throughout the day.  After yoga, I joined my daily morning council circle.  I shared that I was moved by the courage the German woman showed the previous day in sharing her fear of feeling weak by acknowledging the pain of Israeli soldiers, who initially upset her.

Before breakfast, I received an e-mail from my friend Mick, who I contacted earlier in the retreat to ask about his grandfather Benjamin’s Auschwitz story:  One day, when Benjamin was around 8, he got to school and they told him “Jews don’t go to school.”  That ended up being his last day.  At Auschwitz, he got sick and in the infirmary, they told him that if he stayed there, they would feed him.  He stayed for months, maybe even years.  They moved him to a few other camps, before he was liberated.  He lost his aunts, uncles, grandparents and cousins.

I entered breakfast with a quiet solemn sesshin intensity and didn’t engage in chit-chat.  I found myself walking to the camp with Swiss Zen Peacemaker Clemens (right) and we talked about how the retreat was going.  Both of us were dealing with a typical practice experience- Craving some type of deeper experience and having that get in the way of our practice.  In this case, we wanted something deeper, sadder, which was tough given the sunny weather we’d been having.  It felt more suitable for there to be darker weather.  We recognized, however, that our thoughts are always the practice, not the weather.

I talked to Clemens about my connecting Bernie’s message yesterday that the practice of bearing witness at Auschwitz becomes the fuel for loving actions (the third of our three tenets, following bearing witness and loving actions).  I shared how this message relates to working with Bernie and my desire to manifest that in my life.  Clemens understood and said he is trying to manifest the same stuff and that he sometimes sees that quality in the people he works with in regional Swiss politics.

We talked about the intense organization of the camp.  I reflected that the camp, along with democratic revolutions and communism, are processes that are only possible in the later period of modernity, since the French Revolution.  While they were centrally coordinated, they involved mass participation which was made possible from the modern technology of propaganda, weapons and concepts and practices of collective determination.  While democracy has ancient roots, communism, fascism and democracy as we know it today are distinctly modern phenomena.

Unsocially engaged Buddhism may have been appropriate for pre-modern times, but in this modern world, it just isn’t a complete practice for me.  That got us into a conversation about ZP’s digital media and what an important role communications play, not just to sell our programs, but to create a more compassionate world.   He agreed and said we should make our digital media more democratic and participatory, mentioning the Facebook page he created for the retreat.  We shared a deep hug before returning back to the hell relics.

Today was a day where my koan practice really kicked in.  Sometimes, I could imagine what Eve might say or what I might say to someone struggling and this inner monologue helps my own practice- the little Obi-wan in my head.  Having both developed the intention of bearing witness more deeply and also having softened my grip on my expectations, I started off intensively focusing on breath counting.

After getting some stillness with that, I recalled Benjamin’s story, imagining him showing up on the tracks in front of me and going through the whole process Mick shared in his e-mail.  I thought about his coming to the U.S. after the war and becoming successful with the carpet store.  I remembered old family divisions.  The fact that Mick’s grandparents were my mother’s ex-in-laws imparted to me a mixed attitude of engaging with then, feeling like I somehow shouldn’t let them in completely.  Sitting by the tracks, I imagined Benjamin earning money and giving it to Mick, which Mick spent on paying for my movie tickets when I didn’t have any money when we were kids.  I remember Mick’s grandmother caring for us.  With all her inner and outer pain and our family’s convoluted history, she showed me so much love- taking such pleasure in feeding me, asking how I am doing.  Sitting in meditation, a desire to atone manifested and the resentment peeled away as I was left with love and appreciation, part of a dynamic so much bigger than taking sides between old family divisions.  I felt a connection to both of Mick’s grandparents in my heart.  The bell chimed.  During the break, I thought that it would be so great if Mick joined us on the retreat one day.

Returning to sitting, the phrase “Jews don’t go to school” stuck with me and became my koan.  “Jews don’t go to school.”  How did that make me feel?  Where in my life were others telling me that people like me can’t do certain things?   Where am I telling myself those things?  ‘bald guys don’t get the hot girls,’ I thought and sunk into that feeling- that shame, anxiety, fear and frustration.

An answer for that koan?

You go to school!

And I suddenly felt so proud of Mick for going to rabbi school.  And I remembered that he saw marrying a Jewish woman as a commitment to his grandfather.  And it dawned on me that he is doing just that.  Not only going to school, but studying Judaism and marrying a Jewish woman.  I would be attending his wedding right after my trip.  The pressure to marry within the religion always turned me off just like the Zionism and therefore, I closed myself from seeing the value in doing that for someone else.  I felt for him and realized that I could still choose my own path.  Tears flowed with this intense feeling of happiness for him- that happiness that I had been holding back.  There are so many ways we hold back our love and convince ourselves that we shouldn’t give it all because of the current set of circumstances, but I suddenly felt some release and outpouring as my resentment, jealousy and judgments faded.  I got up with tears, trembling and still shaken.

READ ABOUT ATTENDING RETREAT NEXT NOVEMBER 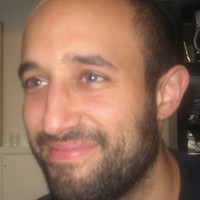