Three Reasons Why I Am Not Married. ~ Kim Roberts

While the masses rage for change in Northern Africa, this week I am waging my own revolution, ousting the mental dictator who has created poverty and destruction in my life. After posting an uncharacteristic piece on my blog, I realized this must be the moment for happy, single women to speak up. My sentiments were coincidentally mirrored in several articles in the media, and yet I feel there is more to add. So while everyone else is speculating about Why I Am Not Married, I thought I’d add my two cents.

Tracy McMillan, in her article, Why You Are Not Married, informs me that I am not married because I am a shallow, lying, selfish, insecure bitch.

Hmm. I’m not buying it. Oh, and #6, I’m a slut. Ok, sure, I can accept that. From a Victorian perspective, it is true. And thank goddess, because if I had been waiting until marriage, I would be pissed.

Then CNN’s Jessica Ravitz adds that the reason why she is not married is that life just happened that way. Fair enough. Things happen. Or they don’t.

Reason #8: I am a product of my generation:

My mother majored in Home Economics and married my father before they even graduated university. She knew she was destined for marriage, so an MRS degree was all she needed to assure her future, or so she thought. In her day, there was no other choice.

Starting with my generation, women are now expected to work. We live an independent life outside the home before we consider starting our own families, so the dynamics have shifted, at least for women. I don’t think they even offer degrees in Home Economics anymore. Sometimes I wonder if men’s expectations have kept up with the changes since my mother’s generation.

As are many of us these days. When my father left us to go make his fortune with another woman, my mother suddenly had to figure out how to support herself and two small girls. This is perhaps an exaggerated version of the story, but it is the one my eleven year old self remembers. My mother had never had a career; she never thought she would have to. Her only work experience was a temporary part time job at the bridal counter of Garfinkels department store before I was born. Suddenly, she was in survival mode. She got up out of bed, got a job at a women’s clothing boutique, and slowly paid her way through real estate school to become an agent.

So I was raised by a single mother who drove me to my first job interview at age 13, lying for me about my age on the job application to circumvent the labor laws that said I had to be 14 to work. I hostessed and waited tables continuously through high school and university. The screaming subtext to this story was: never be dependent upon a man. Learn to support yourself. And when I was born in the summer of 1965, women were marching just down the street on the capitol in DC for my right to do this.

This era was also about the time that divorce started becoming fashionable. I know because when my parents did it, I was the only one in my junior high class of 300, that I knew of anyway, who didn’t have a father at home. My parents haven’t had a kind word to say to each other in over 30 years. I’ve experienced firsthand the destruction that comes from marriage gone bad. So do you think I was in a hurry to go running down the aisle?

I never particularly wanted to end up single, but I sure as hell didn’t want to end up divorced. And as a child of divorce, I never ever wanted to put children through that experience. Can you blame me? And there is one sure way to avoid that: don’t have children. And these days, if you are not having children, is there really a need for marriage?

I’m not sure this was the most sane response, but it is one that played a part in my history.

But this doesn’t explain the most important reason of all.

My mother never had any doubt that she would get married. Women in her generation expected that they would be supported by a man. They had to expect this, as women did not have the freedom to create a life that we do now. So my mother married a man who was, frankly, not very respectful to her. And now that my mother does have a choice, she will not marry again.

I was raised in an entirely different culture than my mother’s, where marriage and children were the assumed outcome of a woman’s life. Never once has anyone in my family said to me, “OK Kim, it’s time you got married now.” My messages were always along the lines of, “How are you going to support yourself?” So I have. And, I’ve been fortunate enough to find something that I love to do.

I suppose I always thought I would work at my career long enough to meet someone to take care of me. It was never the assumption that I would end up doing this my whole life. I was just supposed to start a career, not finish one as well.

But, probably as a result of Reason #9, I got involved in some very unhealthy relationships with disrespectful men. I’ve made some poor choices. Who hasn’t? And I’ve had to work through a lot of heartbreak, which takes its toll. There is still work to be done.

So what is my responsibility here? Am I simply a product of a generational oversight? A victim of a bad divorce? A contributor to societal disintegration? I don’t know.

I do know that it is still a man’s world, despite all the “progress” we have made advancing women’s rights. I never considered myself a feminist. I don’t support the theory that feminists love divorce, or that “feminism also taught women that men are idiots,” but I do agree that many of the “rights” we women earned from the Equal Rights Amendment caused more harm than good. I now have the right to go to war. Goody. Just what I always wanted. And now, working is not just a right, but an expectation, on top of all the other things expected of us women.

I like having a man open the door for me. I’ll admit it: I love men. But what I don’t love is being abused, tricked, exploited, bullied, or taken for a ride. And since my mother showed me another option, then if I have to use that option I am perfectly capable of it. No, let me rephrase that: I am perfectly happy living on my own.

From the great blog rae-regenbogen

Because I have a choice. And my choice is this: I choose respect. And if a man is not willing to show me this, then I choose to be alone. My self respect comes first.

And yet I can’t help feeling sometimes that it is precisely my independence, my capability, my fearlessness to create my own life that has scared off some men. I am a threat.

But I never learned to dote on a man June Cleaver style, and there are still a lot of Beavers out there. That simply was not part of my upbringing. I learned to take care of others, but also myself. Thank goodness for that. So while Ms. McMillan lists all the things we women need to respect to win a man, I would add that there are a few things he has to respect to win me. If I have to choose between disrespect and being alone, then I choose to be alone.

But there is something more important than any of this speculation about my marriage prospects. It is my state of mind around the whole situation. Rather than setting my sights on a pre-fabricated goal, striving to behave in a way to reach success, the most important thing is to maintain an open mind about the situation. If I am happy, then really what does any of it matter? 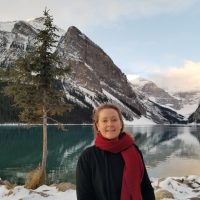 Kim Roberts earned an M.A. in Contemplative Psychology from Naropa University and was authorized as an Ashtanga yoga teacher, teaching internationally for over 20 years. She … Read full bio