The Yoga of Hemispheric Specialization

(This post follows from that of Carol Horton’s intriguing article last week regarding left/right brain functioning; and, I see that it correlates with yoga 2.0’s post today)

In one of my neuropsych classes earlier in the semester, we viewed a Tedtalk by Harvard neuroscientist, Dr. Jill Bolte Taylor as it pertained to our study of the specific functions of the left and right hemispheres of the brain.  Many of you are familiar with her as the doctor who analyzed her own deteriorating brain function in the midst of stroke.  The blood vessel which burst in her brain that morning was in the left hemisphere which is really active when we are functioning in this world, in our jobs, with other people.  It is this side of the brain which allows us to think, plan, and organize; to take the data from our past and apply it to our future; it allows us to speak and write words.  It is our list maker, reminding us what we have to do when.  It is in action whenever we describe or think about ourselves as something: ‘I am athletic’, or ‘I am not good at drawing’, or, ‘I make a lot of money’.  All definitions of self and left brain functions were lost to Dr. Bolte Taylor as her brain bled that morning, which left her with only right brain consciousness.

The right side of our brain has functions more related to receptivity or inspiration than action.  So, we see images in our right brain and we (attempt to) bring out music, art, and writing from here.  It’s more about experiencing the experience than interpreting it and then doing something with it – present moment awareness.  She described that during the stroke before she realized what was happening, she looked down at her arm and instead of a barrier of skin defining her arm she saw atoms and molecules which were not separate, apart, or different from the atoms and molecules of the wall.  All boundaries had dissolved in fact, and she found herself in a free floating space of vast peace and immeasurable beauty.

Which made it really difficult for her to utilize that arm that did have a boundary to call for help during small moments of left brain lucidity where she realized, as a neuroscientist, that she was having a stroke.

Watching the doctor tell her story is extremely moving, like watching an artistic performance.  I’m guessing before this profound experience she did not lecture in this manner, full of demonstrative, flowing gestures, full of analogies to the natural world. I’m guessing before she had this experience she didn’t refer to her spirit as a ‘whale gliding through a sea of quiet euphoria,’ the whole while looking to the heavens remembering what she saw, what she felt,  emotion shaking in her voice. It is difficult not to feel a swell of emotion as she discusses her death surrender in the ambulance, when she said goodbye to her life and felt her energy leave her body like the last poof of air out of a balloon, released into absolute space, silence, and freedom.  That she experienced this with such a level of conscious awareness and could bring it back to tell us about it is remarkable.

Afterward, I could see my students were affected.  Most sat quiet, and I simply waited for someone to talk after I x-ed out of the screen.  One student commented she meditates some, and caught analogies of what the doctor experienced to Buddhist depictions of enlightenment.   A student who hadn’t said a word until this point in the semester looked around at his peers, raised his arm briefly and announced, “I thought she sounded crazy.”

We all chuckled because we understood.  Who in their right mind would seek right brain consciousness – free floaty, ungrounded peace, music, art?  It’s crazy to pursue these things right here in this world, where we live our physical lives where, c’mon people, let’s be practical, we have to make a living and dress ourselves.  Come back down now.  This is where we live.

We all appreciated his point.  We all got it.

Later in class, I showed another video clip in which a scientist studies hemispheric specialization in a patient with a ‘split brain’, someone who’s had the connecting fibers between the hemispheres of the brain (the corpus collosum) severed, in this case to reduce severe epileptic seizures.  After discussing the respective functions of the hemispheres, the scientist concludes, “If I have to lose the function of one side of my brain, I know which one I wouldn’t want to lose, haha.”  The side from which he works.  The side from which we all work.

But most of us will never have to choose between them.  We have both.  It’s a matter of choosing when to utilize which and in what order.  If we don’t quiet down, stop, and attend to our right brain consciousness, we won’t even recognize its existence, like the scientist; or it will take a stroke or something equally profound to find it.  It’s quieter than our left brain and not nearly as demanding or driving.

If we don’t utilize our left brain’s amazing abilities to bring forth the qualities inherent in our right, none of the good things found there will ever come to be. We can do both, lucky us.  We can create nirvana right where we live. 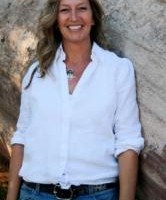