An Outpouring Of Breath-Giving Poetry.

It started a couple years ago as a seed of an idea.  I wanted to help kick-start and harness a modern day renaissance of Hafiz and Rumi. I knew they were living amongst us, but just needed a platform to share their existential expressions.  I decided I would create a book anthology of modern living poetic voices, and began to accept submissions in October of 2010 for “The Poetry of Yoga” Book anthology.  Over the next six months I received over 1,500 pages of poetry from over 10 different countries. The outpouring of poetry was beyond my own expectations.  There came a point, during the final week of submissions, when over 35 poems were coming in a day!  Finally, I had to officially close submissions on April 15, 2011.

The reading of all this work has been an absolute pleasure and joy.  An honor to have my finger on the pulse of some of the most creative, soul-inspiring, and mystical poetry from around the world.  I’ve taken the past six weeks to read the work over and over and over again; many of the pieces multiple times.  I’ve been doing this while on the train (staring out the window between poems to catch my breath), while sitting in Upavistha Konasana in my meditation room (burning sage and watching the flickering candle light dance across words), while at the park (serenaded by drum circles), while at the coffee shop (smelling the aroma of awakening), and while sitting in the doctor’s waiting room (no hurry, I was reading patience).

I’ve created distance and space, so that I could read some of the poems in different environments to see how they affected me, at different times.  And yes, against my initial instinct to do all the editing without using paper, I caved, and did have to print out all the work (on 100% post consumer recycled paper).  This has been an extremely difficult process.  The poetry is so, so, so good that it seems unfair to try and limit it to one anthology.  So do not fear, I am creatively thinking about how to expand the project beyond one book so as not to lose the opportunity to broadcast to the world all these tremendous poetic voices.

As a team of graphic designers begin to help lay out the book, I do want to acknowledge the incredible work of Laura Berol, the One Common Unity Fellow assigned to this project and serving as communications director and assistant editor.  She has helped tremendously and gave me her top picks, which I am taking very seriously.  But in the end, if you’re going to be mad at someone, it may as well just be me:)… no selection committee, no board, no panel of poetry experts… just me.  Making the decision about what will appear in this collection and what will not.  In order to protect any bias I could have possibly had, I’ve read all the poetry without seeing the names of the authors.  After reading through and sorting the work into large piles through my own internal system of poetic theme and poetic quality, I began to move poetry from pile to pile and over the past week, slowly narrowing the work down to 450 pages!!!!  Still too much for one book.

There are some very important things to remember.  If a poem was not accepted for inclusion in The Poetry of Yoga Book Anthology, it does not in any way reflect the quality of the writing.  In the end, I did go back and re-review work from parts of the world like Sri Lanka, Ireland, the Philippines, Wales, Guatemala, etc… to assure that the anthology had a diverse chorus of voices that represent all the different regions of the world.  In full transparency, there were instances when I felt one poem might have been stronger than another, but instead decided to choose a poem from a region of the world that was not yet represented, or underrepresented.  This was my editing preference, to value and honor diversity of theme and geographic region. The overwhelming number of submissions came from the United States, and some of the hardest decisions to make were around poems that all were touching on the same theme.  For example, it’s possible that someone had written a brilliant poem about “breath” that was not accepted simply because a third of the poems that were submitted somehow were exploring the theme of breath.  To keep the book balanced, I could only include a handful of poems on breath, which meant I had to make some very hard choices.

In these upcoming months of book layout, final design, and editing I will be trying to make sure that as many individual voices as possible are represented. This is when I will start looking at names and seeing which poets had made multiple submissions that I had chosen for inclusion in the book.  I will do my best to limit the number of pieces by poet to 3, to assure we can have as many different individuals featured in the book as possible.

I have been extremely moved by this entire process and everyone’s trust in me to see it through to the end.  What began as a one-human guerrilla operation became a poetic movement harnessing social media to enable extensive outreach for gathering an abundance of submissions. I see through reading the work that has come in that technology cannot dampen our poetic souls… instead we are creatively learning how to use it as a tool to help us express and release what is locked in our muscles and bones… through spirit-filled words.  With all of your loving kindness and support my initial mission has been accomplished.

Now, the other part of the mission is for this anthology to raise money for the dynamic work of a great non-profit organization called, “One Common Unity.”

For 10 years One Common Unity has been supporting a movement for peace education and the building of a non-violent culture through music and art.  As of today, anyone who donates $15 or more to the One Common Unity Crowdrise Campaign will receive a free version of The Poetry of Yoga e-book when it is released this fall!

You can reserve your first complimentary copy now by donating here:

I’ll keep you posted, thanks everyone for all of your encouragement and support!

IF YOU WANT TO STAY CONSTANTLY UPDATED ON THE PROGRESS, OR JUST APPRECIATE THIS PROJECT THEN PLEASE “LIKE” OUR FAN PAGE: 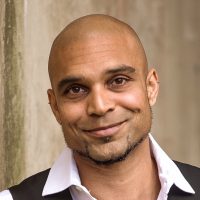 HawaH is an author, educator, entrepreneur, non-profit leader, and yogi. He is the CEO/ co-founder of One Common Unity, a non-profit organization that is building a culture of… Read full bio