Not to sound like a b*tch, but your yoga class was totally lame.

As co-founder of the irreverent community forum Recovering Yogi, I am so pleased to share one of our favorite stories by our June contributor of the month, Shawn Radcliffe. I think a lot of us can recognize a little piece of ourselves in this farcical look at the mind of a superficial yoga student, and those of us who are/were yoga teachers will definitely recognize this student archetype. This piece was originally published on Recovering Yogi. My name’s Stasia. I was in your class tonight. I love yoga. I’ve been doing it since I was eighteen.

I used to ride horses, but that got lame real fast. Horses sweat and smell funny. Kind of like that guy in the corner in class? You should do something about him. Make him go to a beginner class. Or a midday class, because I don’t usually go to those, so it’s fine if he does.

I haven’t seen you at the studio before, so you must be a new teacher. Even though you’re kind of old. This is the first time I’ve taken your class, but I know enough about yoga to give you feedback. You don’t mind, do you? Of course you don’t. I mean, look at me; I’m hot and super-bendy. You’re lucky to just have me in your class.

Not to sound like a raging bitch, but your class was totally lame.

No, that’s not the only feedback I have. This is supposed to be a level two class, but it felt like a level one, maybe a one-and-a-half if I did it with my eyes closed, which I did part-way through just to keep from falling asleep.

You’re new here, so I’ll let you know how things really should be. I mean, you had us holding poses after just ten minutes. You’re not supposed to do that until at least forty minutes into class. And holding Warrior II? Dude, only beginners hold that pose.

No, I’m not a yoga teacher. But I’ve taken more classes here than you have, so I know what’s supposed to happen in class. Look at Bryan and Natasha’s classes. They make me work hard. I sweat a lot in those classes. I come here because I want a good workout, not to hold a pose and think about my breath. That’s just lame. I can do that at home while watching American Idol.

What types of things do I like in a yoga class? You know, stuff that makes me work hard. And sweat. Not the lame crap you had us doing.

Specifics? Why should I have to give you specifics?

You’re the yoga teacher; you should be able to figure it out. I mean, just make us work hard. Figure it out.

Okay, if you’re going to be like that. I like to move more. None of that holding poses crap. And there was no core. I come here to work on my abs.

What? The back is not the core. It’s abs. Dude, where’d you do your training? That’s lame. And when people say “core,” they mean crunches. Not holding in boat pose for a long time. That doesn’t do anything.

Also, you seemed to demonstrate more of the poses than the other teachers.

Bryan and Natasha never do that. You should at least try to be more like them. Bryan always says that he only does the poses that he can do well and if someone asks for something else he warns them that it might not look quite right. You should do that.

But if you’re still going to do the poses, you might as well do them right. I mean, your back leg was an inch too low in Warrior III. Maybe there are poses you actually can do, but if you can’t do them, you really shouldn’t show them. The beginners might get confused.

And the music. The last song you played in Sivasana was okay, but the rest was lame.

What? It’s pronounced Shivasana? I don’t think so. I’ve been doing yoga for five years, so I think I know more than you do about yoga verbiage. It sounds like the second “s” in my name. Sta-see-aaaaaa.

Anyway. That last song was okay. But the rest? I don’t like that jazzy stuff. I like music I can sweat to. Bryan and Natasha play music that’s way better than the crap you played.

No, that’s it. Maybe next week you’ll be better, but probably not. I might even think about coming back, but only if I can’t make it to Bryan or Natasha’s class that day. 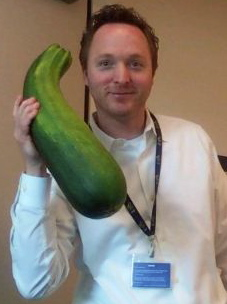 Shawn Radcliffe became a yoga teacher for the same reason as most: “I liked doing yoga and, um, well, it seemed like something fun to do.” After eight weeks of intense memorization of one yoga sequence (and occasional back stroking by his teacher), he added the 200-hour yoga teacher certification to his already-long-list of Exciting Degrees That Still Leave You Hungry (also includes Music, Creative Writing, and Clown). Shawn currently teaches yoga in Portland, Oregon, where according to his students he is the Senior Teacher of Mocking. He continues to write creatively, spewing forth his true divine nature on The Lost River of My Consciousness. You can find Shawn on Twitter.

Joslyn Hamilton is a freelance writer living in beautiful Marin County, California. She is one of the co-founders of Recovering Yogi and also launched Creative Truth or Dare. … Read full bio