Not Your Grandma’s Props

It’s a rare moment of quiet here at the ol’ homestead (I am 2 weeks and one day away from my wedding, so “rare” is an understatement)…I’m in between classes and errands (like a trip to the makeup counter at Nordstrom where I will try not to reveal myself to be the clueless galumph that I am when it comes to all things cosmetics)…and I’m happy to have a moment to sit and write and sip at some overly-hot green tea.

(No, I have not successfully given up coffee…but I’m now down to one soy latte every-other day.  Pretty much.  They’re so goooooooood.  And I’m not drinking any wiiiiiiiiiiiiiine.)

Some people are really good about this…some people dutifully grab an armful of blocks and blankets and straps before setting up for class and are quick to slide them underneath errant hands and feet when necessary.  These people are happy when using their props.  These people are usually not trying to win the yoga class, and so it is no great bruise to their ego if they occasionally need a little square foam help.

But not everyone is so, ahem, flexible.

The other night I was teaching a class in which there were several older men (60’s?), some of them I knew, some of them I didn’t, and all of them had obviously done yoga before…a couple of them seemed like they had probably been doing yoga for years and so their practices were pretty strong.  They were not, however, completely free from physical limitations.  (Who is?!)  And while one or two were doing a good job of taking care of themselves, there were a couple others–men who obviously knew each other, men who (it seemed) had something to prove to one another–who were not interested in this wimpy “taking care of yourself” business.  There was no resting for these fellows, no vinyasa skipping, no childspose-ing…just tight-jawed huffing and puffing their way into and out of poses.

Okay, fine.  Cool.  That’s not my lesson to teach anyone.  I mean, god knows when I first started practicing I was just constantly trying to climb my way to the top of the class so I could earn some kind of “best student” trophy…so I knooooow from whence they come.  But there was one pose that we were doing, that involved reaching back for the foot of a bent back leg, that was just proving impossible for one of these gentlemen, and so I encouraged him to use a strap.  A strap, in this pose, would have made it not only possible, but actually ENJOYABLE.  He would have found the rolling back of his shoulder, the stretch at the front of the back thigh…but when I encouraged him to try the strap, even offering to help him set it up, his answer was a very definite:

That’s it.  He just looked at me and said, “NO.  No, thank you.”  And then went back to aggravating himself with his out of reach foot.

And all that night and this morning I kept thinking…the poor guy doesn’t know what he’s missing! He doesn’t know that props are amazing, and that they will only improve a practice, that the body will actually open faster if it’s supported.  No one’s ever told him that.  Or they have, but someone more compelling has apparently told him that props mean you. Can’t. Do. It.  And that taking a prop means admitting defeat.  And I have to admit…had this been a young woman who had so frankly refused me, I might have made it a point to say something about props to the class, about how yoga is not about successfully executing poses as much as it is just witnessing yourself attempting to execute poses…but I didn’t.  Because, I don’t know…I feel like you shouldn’t mess with old dudes.

But it got me thinking about props in general, and about this strange stigma around them–I see it in so many students, and certainly for years I saw it in myself.  I had a student this morning who has an injury, an actual injury, and when I told her she should start using a block in triangle on that side of her body she looked absolutely crestfallen.  And I thought, well, this must be because props=help, and we can not avoid our ingrained protestant work ethic which finishes that equation as: props=help, help=failure.

And I thought about how reluctant I am, sometimes, to reach out in my own life when I need supporting.  To use my family and friends and therapist and doctors and dentists and whomever else to prop me up.  Because I don’t want them to know I need it.  Because I want to do it on my own.

But if it’s true that the body will open more quickly if it’s supported–isn’t the same thing true of the heart and the mind?  Isn’t this why we need our homes and our families and our friends so very, very much…because just the knowledge that they’re there, just the fact that they make the ground a little steadier, allows us to take wing that much quicker?  And isn’t this the really magical part of the yoga practice?  Because by gosh, if you are unwilling to even allow yourself the helping hand of a square piece of foam in a yoga class, a place where there are no real stakes whatsoever, you can bet that same pattern is resonating all over your life in other ways.  And if you missed it in your life, it’s going to show up for you right there on your mat.

I just…I love that.

So, EJ-ers, do yourself a favor…prop yourself up.  Use whatever you’ve got.  Just bring the ground a little closer, and then see how much further you can reach… 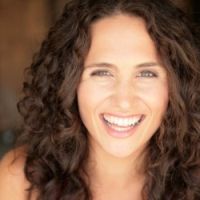