Bhakti Fest 2011: Looking at the World through Bhav Colored Glasses

If you have not had the great fortune to experience the crazy wonderful world of Bhakti Fest yet, do yourself a favor and get yourself to Joshua Tree next September no matter what it takes!

This was my second Bhakti Fest and definitely not my last (despite the cross-country plane trip!).

Unlike some of the other yoga festivals Bhakti Fest is really about, well, bhakti – devotion! It’s not a rock and roll kind of vibe.  There’s no booze or drugs or meat peddled. It’s a pure, clean-living, devotional, yoga-fabulous party!

There is outstandingly good kirtan pretty much 24 hours a day. More yoga classes than you could possibly take. Amazing workshops and lectures. Deliciously healthy food of all varieties. Fabulous vendors selling all sorts of funky stuff.

And most importantly, lots of happy, smiling, blissed-out people joyfully frying themselves in the high desert sunbeams!

Here are a few of my personal highlights of the Festival this year:

1. Gaura Vani‘s new project: “Sita and the Hanumen” played such a gorgeous and heartfelt set. They are all true Bhaktas, gifted musicians and talented performers (plus Benjy Wertheimer and Gaura together – a bucket load of laughs…both of those dudes are hilarious)!

2. Scott Blossom: I took 3 of his Shadow Yoga classes. It’s apparent that as a person he has such integrity, grace, poise and lightness of being – and consequently this is how he teaches yoga. It’s quite a wonderful experience. He’s very knowledgeable about the ancient traditions and roots of yoga. As an Ayurvedic and TCM practitioner, he brings his extensive and holistic understanding of the body to his teaching. I highly recommend studying with him. I learned some superb techniques from him that feel so nourishing and grounding to my body that I am now incorporating into my daily practice.

3. The Swamis!:  We were so blessed to be led in workshops and kirtan by two truly inspirational spiritual leaders – Radhanath Swami and Sacinandana Swami.  The love, compassion, grace and understanding that emanates from these two swamis is palpable, uplifting and deeply healing. I am so grateful to have been able to attend their multiple lectures and panels. They are both such sweet and kind human beings – one feels immediately at ease in their presence. Radhanath Swami always tells the best stories!  Sacinanadana Swami’s workshop on chanting from the heart totally inspired me and reinvigorated the way I go about my daily chanting. Not a technical “swami”, but Shyam Das was with these two quite a bit as well. He embodies what being in the Bhav – the devotional mood – is all about. He is a brilliant storyteller, a total ham, a wonderful musician and Vedic scholar. Shyam Das (in the photo above) was definitely an important figure in my Bhakti Fest experience as well.

4. Hare-Krsna Mahamantra chanting constantly!:  The Mahamantra never seemed to stop at Bhakti Fest.  Lord Krsna definitely presided over the festival! It seemed like every artist sang to Krsna and Radha on both the Main Stage and the Hanuman Stage.  Plus all the chanting in the workshop sanctuary and the live music for the yoga classes too – never-ending Krsna love! On Saturday night there was an epic pop-up kirtan in conjunction with the parade of the Jagannath, Baladev and Subhadra deities from the Main Stage. The Mayapuris and Gaura Vani led this traveling kirtan party all around the festival grounds. Super fun.

5. The diversity and breadth of the community: Looking around Bhakti Fest we saw all different types of people (not just the thin, white, bendy, female demographic that oftentimes rules the modern yoga scene). There were babies and grandparents and all ages in between. There were people from Japan, Australia, England, India, Germany and more. There were hipsters and bros. There were hippies and Hare Krsnas. There were some people there who looked like these totally average middle-class Americans….the kind of people you just walk by without noticing in the grocery store ….but these ones knew all the words to the Hanuman Chalisa by heart. Awesome! I love when stereotypes just blow up in your face! There were plenty of Santa Monica yoga-yuppies and some LA plastics too, but I think the Burners outnumbered them!

Bhakti Fest lined up perfectly with the end of Burning Man this year, so I definitely saw a lot more ass-cheeks around the retreat center than I might have wanted to! (Seriously, what’s up with that….even at night when it got cold, why don’t you put on pants! Seems like there is a Burning Man dress code – it involves lots of brown/black/beige leather and suede, small belly shirts, tiny skirts or bootie shorts, a big leather belt with lots of pockets (a glorified hippie fanny pack), feathers in the hair, body paint and then sometimes leg warmers…which makes me wonder – if you’re ankles are so cold, why in the world don’t you put on some pants! Ok, Burning Man fashion report over…

But in all seriousness, this diversity of the crowd is one of the most beautiful aspects of Bhakti Fest. No matter what we look like, where we are from or what we do for a living, we all come together in the vortex that is Joshua Tree, California, to chant the names of the Divine and tune-in to a higher vibration through the practices of kirtan, yoga and meditation.

By Sunday night we were all so stoney-face from the God-vibes that all boundaries seemed to have dropped. Everyone was dancing, singing and tossing flowers in the air at the All-Star Jam of the Mahamantra for the closing ceremony.

Bhakti Fest makes the prude, cynical East-Coaster in me shed my proverbial iron corset, take off my shoes, embrace the sappy woo-woo stuff and unabashedly dance for joy!

What were your highlights of Bhakti Fest? 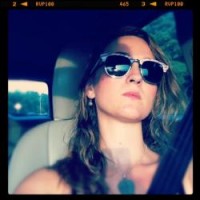