Get Your Crunch on: The Six Species of Boulder Hippies.

The other day, I found myself standing in line at Whole Foods to buy a bottle of green kombucha. I had just finished a particularly hard yoga class and was anticipating the pleasure of consuming a refreshing, pro-biotic drink when suddenly, I experienced one of those moments when you see yourself from above. The picture I saw was both comic and uncomfortable. There I was in Whole Foods with a yoga mat strapped to my back, bike shoes on my feet, yoga clothes on my body and a bottle of kombucha in my hand. To say it was very “Boulderesque” would be an understatement. To say it was cliché would be much more to the point.

I had to wince.

Recently, an outside-of-Boulder friend called me a hippie, saying it was because I live in Boulder, am “in to” the outdoors, practice vegetarianism and have long hair. I couldn’t argue with these things, but really? A hippie? I denied it. After all, I shower regularly and I don’t even wear tie-dye. Plus, I’m from Southern California; I have never considered myself a hippie. Yet, standing in Whole Foods in my current state, a light went off and I thought, “Damn, I do fit the bill. I am a walking stereotype.”

No wonder Boulder gets poked fun at.

For many decades, Boulder has been considered a haven for anyone interested in pursuing the “alternative lifestyle” and the word, “hippie,” has long been associated with the city as have other popular nicknames like, “The Bubble,” “The Republic” and “25-square miles surrounded by reality.”

We aren’t exactly a town of the pure, 1960s flower child type hippies anymore, but outsiders still have specific images in their minds of what we Boulderites are all about.

Yes, the term, “hippie,” has taken on new meaning. There’s no doubt, Boulder has developed unique breeds of people, embedding certain ideas and values into these blood-types, fostering specific strains of fads and pastimes for implantation and ultimately, crafting a species distinct enough so that anyone from the outside can guess their habitat.

Who are these people?

They are us. We are them. They are everywhere. They are the Boulder crunch crowd. And, if you haven’t found a herd to run with yet, you better choose, otherwise, you might just get chased out.

We all know them. Boulder is comprised of many after all. They subscribe to a lifestyle of little woe because they don’t have to worry about money. They tend to be leeches of family wealth, professional slackers to the max, types that preach environmentalism but drive Range Rovers or Land Cruisers. Yet, being somewhat insecure about their wealth, they may put on a front of being poor in order to gain credibility, wandering around Boulder with a musical instrument and sporting the look of a Rastafarian or flower child. They may listen to Grateful Dead or spend significant time following Phish around the country. In all probability, they have medical marijuana licenses.

These earthy, friendly folks either have gardens in their backyards or rent plot space at a community garden, where they grow much of their own food. Otherwise, they buy food shares from Boulder County’s local farms. The also eat a lot of homemade granola. They bike everywhere they go and know the Boulder bike path like the back of their hands. The ones without bikes you can thank for contributing to the success of the Boulder Bike Share. If they have money, they probably wear a lot of Patagonia products that are made from the recycled material, capilene, but if not, they shop at Savers and wear clothes that have vines or flowers on them. They use Dr. Bronner’s soap and almost always compost.

They look like they just stepped out of the 1960s. Sadly, this is a dying breed in Boulder. They sport tie-dye attire and wear their hair in dreadlocks, advocating peace and love and living freely out of brightly colored vans. They are not picky about food and are merely grateful for nourishment in any form. Some of the other Boulder hippie types don’t like them because of how they look on (or near) Pearl Street. The real hardcore ones are migrating to Nederland or the West coast because they find Boulder pretentious and unwelcoming.

While maybe they believe that wearing magnets improves health, these types are followers and believers in the mystical and alternative worldly wisdoms. They also may be former beat poets and Dharma bum types or, they hold associations to Naropa University. Most likely, they have a large section of shelves in their homes devoted to self-help books. They are always experimenting with special diets, but can never seem to find the “right one.” They visit either a psychic or an astrologer monthly and often they read their horoscopes out loud in coffee shop lines and can be heard saying, “This is right on!” They spend a lot of time at Trident and they keep that bookstore underneath Ben and Jerry’s in business.

They are the Chaco-wearing, Prius-driving, Whole Foods-shopping types. Do they even know where Safeway is? Since they don’t seem to work, they can most likely be found in mass quantities at afternoon yoga classes. They also may adhere to expensive diets like gluten-free or raw and most likely, they write a personal blog about this diet, which they update regularly from their I-pad at Saxy’s Cafe while drinking an almond milk, half-caff, skinny, sugar-free vanilla latte. They never miss the Boulder’s Farmer’s Market and at night, they go to The Kitchen for special plates like the “Colorado Quinoa and Grilled Broccoli” for $19. They feed and bathe their dogs with only organic products and frequently go on weekend retreats to the Shambhala Mountain Center.

They fit any of the above criteria except they drive Subarus and are fanatics about exercise and outdoor sports. They can regularly be found hiking Mt. Sanitas, most likely training for a triathlon or a 14er. As enjoyers of simplicity, they might ride single-speed, hard-tail, 29er mountain bikes. If they are climbers, they talk way too much about climbing. In all probability, when things go well for these types, they say, “sweet.” They wear a lot of outdoor brands like The North Face and PrAna. They work to play and therefore, hold jobs with strange hours – baristas, bartenders, web-designers and free-lance “you-name-it.” Obsessed with gear, they tend to spend their paychecks on their activities and/or traveling to get to their activities. They are frequenters of Neptune’s, The Mountain Sun and the Eldorado Corner Market.

Did I leave anyone out?

Of course, hybrid hippies are on the rise, adding directly to the “diversity” of Boulder. Maybe you are a trustafarian hippie that sometimes rides your bike with the eco hippies. Or, if you are like me, sometimes you enjoy eating your homemade granola (my eco hippie side) while hiking up Mt. Sanitas (my adventure hippie side).

It was just the other day that I saw a Subaru pick up a hitchhiker at the mouth of Boulder Canyon. The Subaru was being driven by what appeared to be an adventure hippie (I know this because there was a bike on the roof and climbing stickers on the bumper). Based on the hitchhiker’s attire, he was obviously a 1960s hippie whose van had broken down (I assume) and needed to get back to Ned.

Such intermingling among species, I imagine, will create more hybrids later on. You see, we are learning from each other and growing more diverse every day. 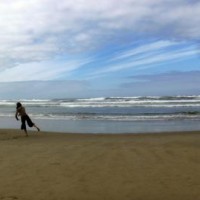 Brianna is a student of life. She lives with spontaneity but intention, playfulness but compassion, and ambition but flexibility. She is also a writer, photographer, outdoor j… Read full bio