Vegan Nazis…Watch Out for Them

I left yoga class in NYC with my friend Bryce.

We walked by one of those doughnut stands.

I’m not sure the last time you’ve been to Manhattan but those doughnuts sure do smell good.

I got myself a doughnut.

“Cool Bryce,” I said enjoying the first bite of my chocolate doughnut.

Bryce continued, “That doughnut is fried in oil, made with butter, white refined sugar, and bleached white flour. It’s disgusting.”

But it sure did taste good.

Bryce went on, “Eating just one doughnut will boost your trans fats intake to its daily limit and throw off your blood sugar, not to mention the death and destruction that went into the making of that doughnut.”

It was fast becoming clear that Bryce is a Vegan Nazi.  (I use that term lightly being that my grandparents were European Jews who escaped the Nazis during World War II)

Bryce kept chattering, “David, that doughnut won’t nourish you in the slightest and you’ll be hungry again soon.”

A Vegan Nazi loves to tell you they’re vegan, and shove (and I mean SHOVE) down your throat the fact that when you consume animal products you are a disgusting person who will die young.

Vegan Nazis are bad for the Vegan movement and they crush your buzz, especially if you get a buzz off food.

Bryce still had more to say, “David, all said and done, you need to lose weight and that doughnut isn’t gonna help.”

With the freezing rain slapping down on my head combined with this nonsense, I snapped, “With all due respect, fu-k you Bryce! I’m freezing, I’m starving, I’m pressed for time…can’t you just let me enjoy my doughnut in peace?!”

*****
It’s been over 60 years since World War II when the Nazis haunted the earth.

But the battle lives on for those trying to reclaim art stolen by the Nazis during the war.

Holocaust survivors and their heirs are still scrapping with museums and governments for the return of thousands of pieces of looted art.

An estimated 100,000 pieces of art remain out of legal reach to those who watched, or whose relatives watched the Nazis steal their art from their dens, living rooms, and bedrooms.

He is a real-estate project manager from Prague, and has been trying for nine years to persuade the Czech National Gallery to relinquish 43 paintings that once belonged to his great-uncle, Richard Popper.

Along with his wife and daughter, Popper died in Nazi camps during the Holocaust.

But the National Gallery has refused to return to the paintings to Klepetar, citing a law adopted in 2000 by the Czech government that entitles only Holocaust victims or their “direct descendants” to file claims for stolen property.*

My mantra: A beautiful, funny, delicious moment a day keeps the stress away.

For many of us, the masterpieces of our lives are not works of art, but rather those little beautiful, funny, or delicious moments that form our greatest memories.

Don’t let your moments, your treasures, be plundered…whether by the Vegan Nazis… or the sheer velocity of life.

As Emerson said, “Guard well your spare moments. They are like uncut diamonds. Discard them and their value will never be known. Use them wisely and they will be the brightest gems.”

To receive more beauty, laughter, and deliciousness in your life, sign up to receive my Moment of the Day 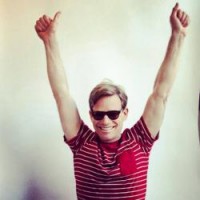 David “Yeah Dave” Romanelli has played a major role in pioneering the modernization of wellness in the United States. He believes wellness and feeling good is so m… Read full bio