Pull Your Ego Out Of Your Asana.

“When you allow your mind to dwell in the intimate of Atman, the ego disappears into the nothingness that it is.” – Darren Main: The Path Of The Urban Mystic

The feeling of a separate “I”, which we call ego-consciousness, is directly related to the strength of ignorance, greed, and hatred. The deepest meaning of ignorance is the believing in, identifying with and clinging to the ego, which as we all have seen, is nothing but an illusive mental phenomenon. But because of this strong clinging to ego-consciousness, things like attachment, desire, anger and hatred tend to arise and repeatedly gain strength.

The ego needs activity in order to exist. Like and dislike, attachment and aversion, greed and hatred are the main overt activities of the ego. The more desire and aversion we have, the more alive we feel, and thus, the more real and concrete the ego seems. In reality, the ego depends on desire, its life-blood is desire.

The ego and desire are like the two sides of a coin — one cannot exist without the other.

As yoga practitioners, our practice grows when we learn to simply get out of the way of your ego driven, analytical mind.

Both asana and pranayama can be very powerful tools, but as with anything, power can be put to very bad use. When we practice the asanas without being mentally and spiritually grounded then it makes us over eager and careless. This can manifest in one particular way: we may become so excited about the odd shapes that we can mold ourselves into and the new found strength that we’ve attained in a relatively short time, that we begin to feel indestructible.

Many practitioners wind up hurting themselves by forcing their way into a new “shape” before they are truly ready. This has resulted in a flood of knee and back injuries recently, even though this practice was created to be therapeutic by nature. Alternatively, the average Westerner, being very driven, may get frustrated if they cannot do certain so called “basic” asanas even after practicing for many years. This competition in yoga generally leads to injury, but even when injury is avoided there is no way to avoid the hang-ups that arise from judging yourself against someone else. It is one thing to be inspired by someone else’s practice but something else entirely when we make comparisons.

This obsessiveness about getting into a posture has slowly become the standard in many gyms and yoga studios. Every asana is ideally a comfortable seated position. The word “seated” is used to describe a suitable, well aligned position for the body from which meditation can occur without distraction. It doesn’t really matter if we are sitting crossed legged on a cushion or doing handstand backbends, the asana is just an outward form that is meant to lead to a higher place internally. So we are not really doing asana practice if we must grunt and groan as we tug our way into some arbitrary shape that at best has no therapeutic value and at worst may cause us distraction and injury.

To pull the ego out, means to have no expectations, no judgment, no attachments, but always a high level of humor.

Laugh when you fall, smile instead of straining, and never take the practice that you love above all else too seriously. If you take yourselves and your yoga practice too seriously then there is always a certain amount of attachment, both to an unknown goal and to the rituals themselves.

Remember that rituals are created for us not the other way around. Rituals such as prayer, lighting of candles, chanting, and asana practice are all wonderful tools and they may help you to focus in preparation for deep meditation. But if there suddenly comes a day when, for some unforeseen reason, you have no choice but to give up one or all of your rituals then rejoice in all that they have taught you and move on. Neither an omnipresent God nor these finite rituals themselves would want you to waste time worrying about what is not meant to be, especially when there is so much more to explore.

The next time you roll out your mat, look deep into your ego and what it does to your practice. If you’re practicing obsessively because that defines you as a yogi, thats ego. If you’re so caught up about missing a class or even a week of practice, that’s ego. If you think you need to look a certain way in a pose, that’s definitely ego. Achieving a deep posture is not the goal of yoga, however it’s the practice of being calmly aware of the present moment, even if you’re falling out of a pose.

Don’t let your evil ego take over, as soon as it appears, pull that nothingness that it is out of your asana. 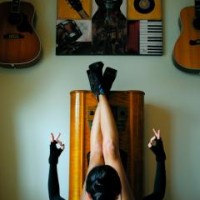 Bee Bosnak is the founder of Beeyond Yoga. A stylish and joyous yogini, who brings a love of creativity to life with her practice. Originally from London, UK, Bee began her yo… Read full bio