Kaspa writes: This time last week I had various post-it notes stuck to my desk. One of them had just three lines on it. Each of these words corresponded to a blog post that I wanted to write. Then I caught Fiona’s cold and my head was so heavy with illness that I could barely put two words together.

I slept when I could, and took cold-meds to get me through birthday parties, and visiting my parents. The cold lasted a few days. When I felt better my first job was sweeping away all the junk on my desk, including the post-it note with my writing prompts on.

The act of writing those last two paragraphs has given me a clear image of that post-it note, and suddenly I can recall what those three sentences were. I’ll share the first with you today… look out for the others later in the week.

This was via Susannah Conway’s blog. The tip is wrapped up in a great anecdote on a site called Lateral Action – but I can give you the essence of it right here:

I like this system for two reasons. The first is that it often works for me. The second is more interesting – when it doesn’t work, I learn something important about myself. For example at the top of my list right now is writing this blog post. As I write I can feel some resistance to the work, and I can see how easily distracted I am. Fiona is working in the same room and as soon as she makes the most mundane of comments I’m trying to engage her in conversation rather than finish this post.

This is where the interesting part comes. To really look deeply at that resistance and ask, ‘What’s going on?’

Right now I know that some of the resistance comes from the fact this is my second attempt at writing something about this subject. I asked Fiona to proof read the first post I had written, and she said that it would be better with an example. She was right, but I hate to admit that I can’t get something absolutely perfect the first time around (no matter how unfeasible that is). Rewriting the post is a real admission of my imperfection.

I’m still distractable. This next paragraph follows a bout of crazy hand jiving to The High Road by Broken Bells.

It might be that I’m avoiding doing the most important job because of something dysfunctional in myself. Lets call it karmic resistance. From a completely enlightened point of view there’s no good reason not be writing this blog post. I am human, and I don’t write perfect articles at the drop of a hat. In fact I don’t really do anything perfectly at the drop of a hat. That’s okay though. From one point of view it’s no problem to admit my humanity, and even to include my humanity in my work. It’s just that little voice, from somewhere in my childhood, I guess, that wants to be ‘perfect’ straight away.

It’s important to me to honour that voice in my own way. To mention it here (or in my personal journal, perhaps). But it’s also important to be able to write this blog post, I can honour the resistance without giving in to it.

Whilst Fiona was reading what I wrote the first time around, I also read it back. I had a feeling there was something missing in what I had written, but I couldn’t put my finger on it. I had acknowledged that I don’t always get on with what I should be doing, and how that gives me the chance to engage with my resistance, but I had assumed that resistance was always meant to be overcome. The list was the master, and I was the slave.

Sometimes the resistance is coming from something important. It might have been that I was avoiding writing this blog post because there was something else I should be doing. Maybe something not even on the list. (When was the last time I called my mother?)

This time yesterday I went for a walk down to the stream that runs though woods near here. It wasn’t on my list for the day, but it was exactly the right thing to be doing. When I came back I was refreshed and recharged and went through the rest of the day with much more ease than if I had chained myself to my desk.

Real life is more complex than a system that can be summed up in a few lines. Today when I encountered resistance to writing this post, the right thing to do was keep writing. Tomorrow the right thing to do might be to go for another walk. I can’t give you one answer that will work all the time.

Look into your heart. Look at the world, to the jobs you have to do. Be honest. Let yourself fail sometimes. Life doesn’t always fit on a list, but sometimes a list can help. 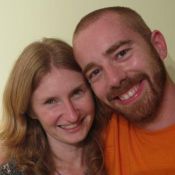 Kaspa & Fiona’s eyes met across a crowded room in 2010. They decided to: a) get married & spend their rest of our lives together, & b) pool their passions … Read full bio