Can you be a Vegan Beekeeper? ~ Will Curley 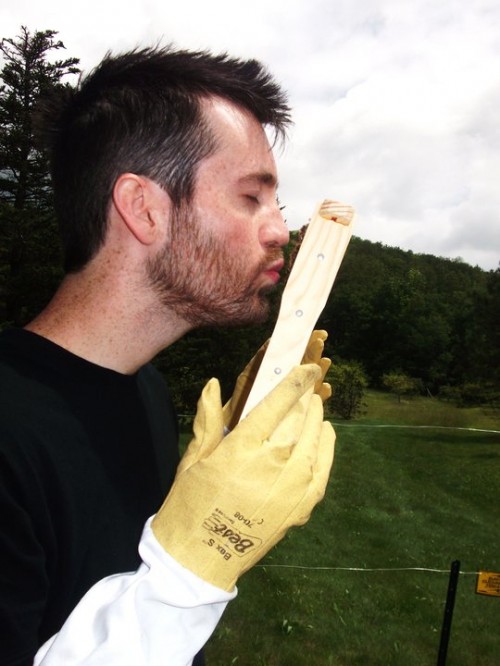 Beekeeping and the Ethical Vegan.

“Can a vegan keep bees?” I don’t wear leather or wool.

I read at least 100 words of small print on ingredient lists every day.

I make annoyingly complex orders whenever I eat out.

However, depending on whom you ask:

I may or may not be vegan.

This is because I work with tens of thousands of animals, and I thoroughly enjoy their products.

In fact, I think they produce the coolest substance currently on the planet: honey.

I keep bees in upstate New York, and will have more hives in New York City this year, yet I don’t feel as though I am in violation of my own moral code. I was discussing veganism and beekeeping recently, and a friend asked me, “As a beekeeper, how can you call yourself a vegan?” I had to think about it. Surely there are plenty of hard-liners who would say that playing with bees disqualifies me from the vegan club.

The distinction I draw is this: I did not start keeping bees because I plan on getting rich off honey sales or wax dividends. I started keeping bees because they fascinate me. Even more important from an ecological standpoint, the commercial use of bees as pollinators is causing bees to die off by the billions. Providing a home for bees where they will not be mistreated, shipped across country on the backs of giant trucks or given genetically modified crops to eat doesn’t sound exploitative to me. 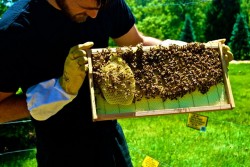 My primary goal is to help my two hives to flourish. I haven’t harvested anything from my bees so far. This might change in the future. If it did, I wouldn’t be taking anything that the bees would miss. Bees naturally produce more honey, wax and propolis than they need each year.

{Everything you wanted to know about beekeeping but were afraid to ask!}

An amateur apiarist collects honey from his or her hives differently than a commercial beekeeper does. To understand this significant difference, you must understand the structure of the hive.

Starting at the bottom, you have one or two “deep boxes” which are roughly 12 inches in height. Above the deep boxes, you have a queen excluder – a metal grate that allows smaller bees through, but keeps the queen in the deep box. Above the queen excluder you have smaller versions of the deep box called “honey supers.” These are between 5 and 8 inches in height. The honey supers are where the beekeeper can harvest honey safely. The queen is unable to reach these boxes, so they remain free of eggs and larvae. When honey is harvested in a commercial setting, there is usually one deep box, and as many honey supers stacked on top as gravity will allow. This causes the already busy bees to work overtime.When the hive is that big, bees assume they need enough honey to fill it in order to survive the winter. The worker bees literally work themselves to death to fill these supers. The commercial beekeeper then swoops in and takes all the supers, and replaces their food with sugar water to feed them over the winter. That doesn’t seem fair to me. It is not a healthy diet for the bees, either.

In my hives, there are 2 deep boxes with one small super on top. This means the bees can store as much as 160 pounds of honey per hive all for themselves, while I take between 10 and thirty pounds as rent. This leaves both me and my bees with more honey than we know what to do with.

Another issue raised in the “vegan beekeeper” controversy was smoking. During hive inspections (necessary to ensure healthy hives) smoke is blown into the hive and at the bees to keep them distracted while the beekeeper looks around inside their home. Surely, my friend said, this constitutes cruelty on a massive level. 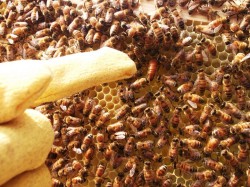 There are two reasons why beekeepers smoke the hive:

The first is that when bees smell smoke, they begin to wonder if a forest fire is approaching. To play it safe, they stop doing their normal job of protecting the hive and begin filling a special gland they have called a honey stomach with all the honey they can. They do this so that if their home burns down, they can begin searching for a new home on a full stomach.

The second reason that we smoke our hives is to calm the bees.  One of the main ways bees communicate is through pheromones. If, in opening the hive, we spook a single bee, she might release her panic pheromone. This would cause all the bees to panic, and many of them would die in the chaos. Blowing cool burlap smoke over them overwhelms their sense of smell without overheating them. As the smoke dissipates, so too does their worry, and before long they go on doing whatever they were doing before the inspection.  I don’t think of smoking my bees as any different than a dog owner bribing their companion with a treat. Both humans get their desired result and both pets get to pig out. I believe beekeeping is not only a fascinating way to explore the natural world, but also an important step in protecting and maintaining a healthy environment.  This holds whether you live out in the country or in a big city.  In fact, city honey tends to be purer and less full of fertilizers and pesticides than honey produced out in “greener” areas.

As with all things, there are shades of grey in the morality of producing and eating honey. Not all honey is cruelly produced, nor is all honey ethically produced. The important thing is that some beekeepers consistently put their bees and the health of the environment first. If you are interested in helping bees to survive, and if you want to ensure that more honey is ethically produced, then support support your local apiary. Or better yet, start your own!

Will Curley was born and raised in New York City.  After spending 4 wonderful years in Boulder attending Naropa University, he has returned home to New York. He was trained in the art of beekeeping by Andrew Cote, founder of Bees Without Borders.  When Will is not busy with work or the bees, he can usually be found making vegan soap, or missing the mountain sun.