How Ego Can Wreck Your Yoga.

As one of the fastest growing industries, yoga finds itself in a new pose, the spotlight.

Whether caught virtually with no underwear on in the exposing New York Times Magazine article, “How Yoga Can Wreck Your Body,” or given grief for only wearing underwear with Equinox Fitness’ provocative viral yoga video, “The Contortionist,” people are talking about yoga.

For a field whose purpose is meant to be unifying (the word yoga literally meaning to yoke or bind), all this controversy feels antithetical and sensationalistic. Yoga is meant to heal and center, not wound and divide.

The latest controversy to grace the yoga world is the New York Times article, “How Yoga Can Wreck Your Body,” by William J. Broad. Right from the title, yoga is convicted. And what’s more, Broad’s article seems to indict the whole of yoga, which begs the question, what is yoga?

Yes, injuries can happen when the wrong person practices a particular pose, but last time I checked, yoga was about stilling one’s mind, not standing on one’s head.

Asana, the physical postures of yoga, are just a tiny portion of the practice, yet we continually forget in the West that yoga is not a workout. The physical poses by themselves are empty. Yoga is our approach to the poses.

Having had many injuries from my physical practice, most recently tearing both my hamstrings, I can say without question that yoga did not wreck my body, I did.

Had I truly been practicing my yoga, I would have been more present with what I was doing. Instead, like most people, I let my ego get the best of me and pushed my body beyond its limitations. To vilify the whole of yoga for injuries most people inflict upon themselves in asana is preposterous. Yoga does not harm, our egos do.

Broad notes a few scary cases, yet most of the incidents and research cited in the article are from the mid 1970’s. The 70’s were only the beginning of the information age. Like technology, the physical alignment of yoga postures has evolved over time.

Looking back at old copies of B.K.S Iyengar’s “Light on Yoga,” modern yoga teachers cringe when they look at the alignment. And Iyengar Yoga is best known for safe and detailed alignment.

As the years go on and we learn more about the science of yoga, the postures continually change to become safer and more accessible to differing body types. Broad discusses a case of a gentleman having his cervical spine crushed in shoulder stand, because he was practicing it on a bare floor “just as Iyengar instructed.”

Today, Iyengar teachers insist that shoulder stand be practiced on blankets, which heightens the cervical curve. Or if a student is unable to support themselves in the center of the room, practice on a chair or against the wall.

There was no mention of the advancements yoga has made throughout the past 40 years. Perhaps, because touting yoga as a medieval form of fitness sells more magazines.

And unless the author was trying to rack up more evidence, those “Godspell” actors in the article pictures should not be turning their heads in shoulder stand, even for an instant!

The reality is that anything done to an extreme can be harmful. Chocolate and wine in small doses provide antioxidants linked to cancer prevention. Yet when consumed in excess, they can lead to tighter jeans and one hell of a hangover.

Yoga can and is often overdone. Hot Yoga, Intense Yoga, Intense Hot Yoga — the Western world has turned a practice of stillness into an extreme sport. Classes are getting increasingly harder. Class levels on yoga studio schedules are becoming obsolete with Level 2 classes looking more like Level 5. As a result, the asana classes available these days are well beyond most people’s physical ability.

It is now equally the responsibility of the teacher to teach to the bodies in the room and feel confident in telling someone they should not do a particular pose, as much as it is the student’s responsibility to know when not try something.

While there are risky aspects to yoga and a few fluke cases, to assail the entire industry with such a blanketing and harsh statement as “how yoga can wreck your body” is melodramatic. This article was intended to sell papers and being a six billion-dollar grossing industry proves that yoga indeed sells.

Let us be clear on what is reality versus gossip or a means to grab headlines. It is not yoga that wrecks the body, but the approach of the people practicing the yoga. 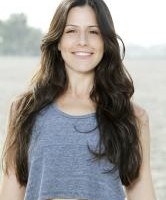 Sarah Ezrin, E-RYT-500, is an energetic and humorous yoga teacher based in Los Angeles. With a profound love of travel, Sarah runs around the globe leading teacher trainings, … Read full bio