What? Hatha Yoga? Isn’t It for the Old & Injured?

Over more than 1400 years of its “recorded” history Hatha Yoga has been used by millions as a science of transformation and liberation.

The view and vision of this highly revered philosophy was always kept well guarded and wholistic in the ancient times by its capable and responsible promoters.

The times seem to have changed. In last couple of decades, the “types” of yoga have given way to “yoga styles,” and a definite preference of hot-a-yoga over Hatha yoga can be seen.

Taking pet dogs for yoga class, executing asanas on a surf board, eating chocolate and drinking wine in between asanas to elevate the “sensory experience” are just a few options yoga’s creative commercialism seems to be exploring.

Creativity is indeed useful but at what cost? Is our thirst for popularizing and promoting yoga diluting the teachings of its essential components?

In the wake of such recent observations, controversies and also seeing how the “asana” aspect has hijacked the weltanschauung of yoga, I wonder where does the good old Hatha yoga stand in today’s context?

Is our obsession of “tailor making” yoga for masses robbing us of its valuable tenets?

What? Hatha Yoga? Isn’t it for the old and the injured? This was the reply I got when I was once asked what “style” of yoga I taught. I have heard a few popular yoga teachers describe Hatha yoga as “soft and gentle physical practice for beginners.” Exploring some websites too, gives a similar view of Hatha yoga.

If this is where the “definition” and understanding of Hatha yoga is heading, then a fresh look at its comprehensive and conclusive founding principles deserves our attention in the modern scheme of “yoga things.”

The Hatha yoga philosophy is an independent philosophy (science) of liberation that has evolved in the scope of Indian spiritual thought. It has potential to deliver us towards the final goal, which is the experience of freedom from shackles of ignorance of our True nature.

A few of the many founding principles and concepts of Hatha yoga have been listed below.

1)      One of the main founding principles of Hatha yoga is that the individual is an inseparable entity of the bigger Self – the Universe.

2)      Going back to the “roots” and realizing this essential unity is the sole objective of the Hatha yoga tradition. This journey of emancipation happens through involution, which the Hatha yogic scriptures call  “samnahana.”

3)      The source of the universe is known as “anama,” which literally means “without any specific name.” This source cannot be explained in words or understood by the mind. That is why the Hatha yoga science has been send forth to guide us in gradually narrowing our awareness from the gross to subtle and ultimately become the experience of One-ness with the Universal potential itself.

4)      The Self-existent anama possesses the power of Pure Will (nija-sakti) with which it manifests the Universe.

5)      Another very important principle on which the Hatha yoga philosophy is based is the “pinda-brahmanda siddhanta,” meaning, micro-macrocosm principle. This beautiful principle states that the origin of an individual cannot be looked at separately from the origin of the Universe itself. In this way the concept subtly points at the evident Unity between the individual and the Universal. Individual Self and Cosmic order are essentially in Unity.

The primary responsibility of exposing the yoga enthusiasts to these beautiful and practical principles is that of the teacher. Of course, teaching asana as one of the most important aspects of Hatha yoga has its own value, but a biased view of stressing only asanas or pranayama can create a myopic view of the vast potential of this transformational philosophy. The orientation of the yoga students will become broader right from the start if the teachers take effort in orienting the students towards a bigger goal of total personality transformation rather than mere transformation of muscular flexibility.

Many a times the students are not able to generate enough faith in the teacher or the practice, which makes them jump from teacher to teacher and “style” to “style.” Knowing that the Yoga they practice is based on Universal and solid foundations can increase their faith in the practice (sadhana).

Knowing that Hatha yoga is a “science of gradually refining the levels of self awareness” can aid the spiritual seeker in not getting stagnated in any particular aspect of this comprehensive science. This will also help in developing patience which is a very important quality of a spiritual aspirant.

Over period of time as Hatha yoga is practiced, the awareness of life and its issues increases. As we become more aware of these issues, dealing with them becomes a challenge. But when the aspirant knows that the potential power of the Universe is itself behind (as he/she is its essential aspect), the power to deal with the chaos of life becomes easier. Faith comes naturally and with faith comes an amazing amount of strength.

The “anama” has manifested the Universe out of its power of pure will. In the same way we too have the ability to manifest our own Universe by the power of our Will. This is because we are essentially the “anama” beyond the limits of name and form. If this concept is well engrained in the mind we all can realize the potential of our own will power and yet be responsible for the thoughts and actions that stem forth from our personality.

The concept of micro-macrocosm can be shared with the yoga enthusiasts with its application to Self esteem issues, Self Love, compassion towards others and valuing human life. Every little creation (microcosm) of this Universe (macrocosm) is important and of value. There is no need for us to feel hopeless and inconsequential as we are essentially similar in nature to the vast universe. This basic connection can be realized if we work on transforming the obstacles.

Thus, Hatha yoga has much more to offer than physical postures and health benefits. The treasure chest of this philosophy is not only in its teaching of a balanced shoulder stand but also in the substance of managing a balanced “head” over the shoulders. In today’s yoga world, as people strive for perfection of postures, the perfection of our personality awaits us. We have the methods at hand, to use them or not is but a matter of choice. 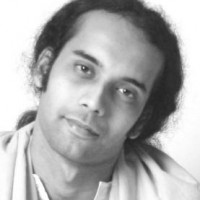