A Response to John Friend’s Plans to Restructure Anusara Yoga.

The Cosmopolitan of Las Vegas

The thing about love is that it doesn’t just disappear overnight.

I find myself in an awkward position. As much as I’d like to shift my conversation away from Anusara, Inc., new developments continue to require that I use my voice.

In that spirit, here are my thoughts on John Friend’s latest letter to the teachers about the future of Anusara yoga.

“Three weeks ago private information about me was posted on an illicit web site in order to harm me, Anusara yoga, and all those named on the site. Although there has been no investigation or verification of the claims, a wide range of intense reactions and judgments has divided our community.”

This paragraph–-in fact the entire letter–-is full of troubling passive language. For example, “private information about me was posted on an illicit web site in order to harm me…,” and “…a wide range of intense reactions and judgments has divided our community.” This passive language carefully creates the impression that the circumstances we find ourselves in have somehow just happened to us, rather than being the result of John’s misconduct.

The passivity of the language makes John appear to be the victim of a situation beyond his control. Let us remember that this is not the case. John is not the victim in this situation. Lest attention be diverted away from the actual victims here, we should remember the teachers and students who have invested years, effort, and lots of money in Anusara yoga. These teachers are the actual victims.

Should we be reflecting on the ways we may have given away power and conferred too much authority upon John Friend? Absolutely. Does that make John Friend the devil? No. Does it make him the victim? No.

“During this month, many of our licensed teachers resigned (8% in total), including some of our leading teachers. I am very sorry and sad for the hurt that everyone has experienced during this scandal, and over time, I fully believe that truth, clarity, and great soul lessons will be revealed for all of us.”

Here we get more passive language, and a statistic. I would be interested in seeing exactly how that 8% percent is calculated. Given the lists tracking resignations that have been posted to Facebook and Bay Shakti—and given that there are currently 505 members in the Facebook group for teachers who have resigned—I find it hard to believe that the resignations amount to a mere 8%.

Actually, I find it impossible to believe. In fact, I don’t believe it at all. I wish I could say it’s the first time I have been suspicious about statistics John has cited, or claims that John has made, but it’s not. In this case, downplaying the number to 8% would certainly be some good damage control. It would also effectively—and conveniently—marginalize the number of teachers who have left.

“The first change is that I have joined in a business partnership with Michal Lichtman, who will now serve as CEO of Anusara, Inc. Michal is a successful business woman and a certified Anusara yoga teacher, and I am very confident that she will skillfully direct Anusara for the greater benefit of all. I am remaining as founder, student, and teacher of Anusara yoga. I am embracing this profound change in my life with bright openness to the next chapter for both Anusara yoga and me personally.”

I do not know Michel Lichtman at all. I have no reason to doubt her integrity. I’m sure she is a perfectly lovely human being. Here’s what I find questionable: the new CEO is a former student of John’s, was already in business negotiations to expand Anusara, and is appointed by John?

To avoid conflict of interest, I would have much preferred to see someone less close to John appointed as CEO. Also, all this appears to have been done without John having been subject to an ethical committee review.

“With significant counsel from teachers in the Kula, we will be transforming Anusara yoga into a teacher run non-profit organization (501C3), Anusara Yoga School, dedicated to serving the Anusara kula. Anusara Yoga School will direct certifications and curriculum and will serve as a central hub of information on Anusara yoga and its licensed teachers.”

A non-profit? That would be admirable. It would perhaps be just the thing an uneasy community would love to hear. Right now we are a long way from being a 501C3.

Assuming the claim of going non-profit is made in good faith—who is going to elect the board of directors? Am I correct in my understanding that it is the current organizational structure that would elect the officers of the non-profit? That doesn’t sit so well.

Also, don’t non-profits require donations? Business wizard, Taro Smith, points out, “Given that the non-profit will require staff (executive director and development director as well as administrative support, office, ability to publish materials, website, directory, e-newsletters, training manuals, etc)…I am estimating that is will need roughly $1,000,000/year to meet operating expenses to stay competitive with the current landscape of certification options. This means if there are 1,000 remaining certified and inspired teachers then that is likely average donation annually they will need to keep this afloat…”

Who is going to donate this money?

“Details of the next steps for the establishment of Anusara Yoga School and the election of its Board of Directors will be communicated to everyone next week by a Steering Committee composed of Ross Rayburn, Todd Norian, Ellen Saltonstall, Deb Neubauer, and Jimmy Bernaert.”

This Steering Committee is made of upstanding members of the Anusara community. I have nothing but respect for these fine yogis and humans. That said, I would feel a lot more comfortable if the Steering Committee included more teachers who have publicly asked challenging questions, and pushed back on a single tiered power structure.

“I would like to personally thank every one of you who have stepped forward to support Anusara and myself during this tumultuous time.”

I fear that I am not one who would be counted among the supporters. I feel, sadly, that support in the form of disagreement has had no place here. It appears to me that “supporters” will be appointed to committees. It strikes me that the promise of being given a voice will be a balm to anyone who has ever felt unheard, unseen or overlooked by John.

That makes me nervous!

“May this new era of Anusara yoga continue to expand Light throughout the world.”

I hope so, but I can’t say that I think it’s looking good.

As my friend Natalie Miller explains, “For me, it’s not an ‘era of Anusara yoga’ that will expand light throughout the world. It’s you, and me, and our teachers and students. One by one, community by community. We deserve—no, we require—direct, truthful, authentic communication to be able to do that. This is not a good start.” 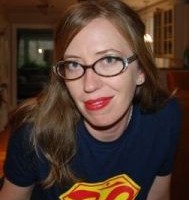