Money is Not Energy.

Money is only energy to the extent that all inert pieces of paper are. Otherwise, it’s an instrument of debt.

Like most of us spiritual folks, I’m interested in earning money and spending money in with integrity. To me this means both receiving & giving gifts and also payment for products and services that contribute to the shifting of our world out of its current difficult state. I’m not against making money or using it, but I’m very interested in transitioning to a sacred economy centered in gift ethics, because I’m  fundamentally suspicious about the nature of money as it exists in our present system.

This means I get especially grossed-out when I hear the New Age axiom, “money is energy.” That hopeful metaphor, meant to assuage our doubts about our worth and enable us to become more prosperous, is actually a bitterly incorrect idea that helps to foster the yucky state of affairs currently enjoyed by our global economy.

Since we’ve set money up as interest-bearing debt (which means whenever money is created, more debt is created—so that there’s always more debt than there is money in the world) we’ve made it so that it actually encourages the creation of scarcity, competition, and hoarding. In the way things are presently work, it requires a broad mind and a deep sense of principle to live as you and I want to live—without hoarding, with lots of connection.

In other words, if you’re a person of principle, you have to actively work against the built-in tendencies of debt-money.

That’s why I’m not able to get on board with the notion that “money is energy”—because it’s not.

Energy is energy. Money is an abstraction, a flawed human fiction that actually most often hinders energy from going where it’s needed. How much important work is there in the world which needs to be done—restoring ecosystems, educating children—which won’t be done because there’s ‘no money in it’? Money as we know it gains in value as it’s hoarded.  It never decays.  It never dies.  There’s much more incentive to hang on to it in giant piles then there is to spread it around. Money is a tricky means of channeling energy and limiting energy, it is not energy itself.

The poet Ezra Pound liked to say that the notion that “money is energy” constituted a “satanic transubstantiation” because it falsified the facts about where energy really exists: in nature, in people, and in the divine.

The idea that “money is energy” is also a “satanic transubstantiation” because it draws our attention away from the real mystery of transubstantiation and incarnation: the presence of miraculous divine love in ordinary life. Jesus (who had a lot of great mojo) said “You cannot serve both God and Mammon.” By “Mammon” he meant the notion of the separate, egoistic self that strives for control through leveraging material wealth and power. You can’t serve both God and Mammon because God is an ultimate unity that transcends separation and egoism.

Saying that “money is energy” when money as we know it (and as Jesus knew it) is designed to be scarce is a lie.

Energy isn’t scarce. Energy is infinite and abundant while money is finite and limited. We have enough energy, enough resources to heal and care for everything and everyone that lives upon this earth. But we don’t accomplish that care because the agreed-upon illusion of money hypnotizes us into behaving as if our love is scarce.

Here’s a prime example: there’s no shortage of houses in the United States.  Houses abound.  There’s plenty of gorgeous houses standing empty. And yet there’s hundreds of thousands of homeless people. The abundance, the plenitude is there.  Yet homeless people can’t go live in the empty houses because they lack money. We have police forces, laws, judges, courts, prisons fully ready to prevent people from living in those empty houses.  Does that make any sense at all? Does that sound remotely compassionate or just?

I’ll go ahead and say no, it doesn’t. Because justice and compassion are built into our hearts.  They’re not built into our money.  And money as it presently exists acts as a hard veil that very often prevents us from seeing and acting upon the true impulses of our hearts.

As you can see, I spend a lot of time thinking about this and I’m glad that you do, too. It’s an important time to be thinking deeply about the nature of economy and the purpose and structuring of currency. A thinker who really inspires me on the topic is Lewis Hyde who wrote The Gift: Creativity and the Artist in the Modern World. 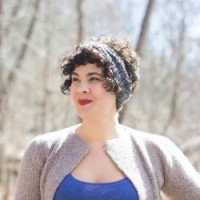 Carolyn Elliott is a bad bitch with a bodhisattva vow. She’s also the internet’s favorite writing teacher. You can grab her free lesson on The Dangerous Secret to … Read full bio