Steve Bridges being silly as he is surrounded by the ladies at my last yoga retreat in Mexico. February 2012.

It poured on Saturday.

The sky opened up and dumped down in long slow strokes, before it sped up and cracked onto the sidewalk it’s big fat dirty teardrops of rain.

I woke up to a tapping on my ceiling and half-asleep I had thought someone was knocking. The grey sky depressed me which seemed a bit impossible being that I was already depressed in the way Old Jen would have been, ( how I think of the earlier, more screwed up version of me) rather than the new yoga-teacher version of myself ( I write with a wry wink and a tongue in the cheek).

I taught my two classes, of course.

I went to the memorial, of course.

My body was aching tremendously. It was like I had taken this last loss of Steve, and every other loss I have ever suffered and stuck them inside my muscles and shouted “Go!”

I sat in the front.

Not by choice. Because my hearing has been worse than normal lately and I was afraid I would miss a word, a story, an intonation.

I still missed quite a bit but I heard enough.

It was the most beautiful memorial I had ever been to.

In fact, for someone who has suffered so much loss, it was only the second one I have ever been to. The first was my stepfather (my mother’s second husband) who died when I was 18, one week shy of graduating high school. We flew to California from Jersey and I sat on the beach in a long flowered skirt in my 91 pound body and threw a rose into the ocean for him as I wept like I couldn’t for my own dad ten years prior.

Grief unearthed is as inevitable as air.

I sat there last Saturday, in my aching body filled with screaming people trying to come out, and, as I wiggled to try and quiet them up, I started to drift to past lives.

My own past lives.

I watched and listened to these gorgeous faces as they openly broke their hearts for us on a podium with stories of Steve’s humanity, his humor, his humility. His kindness. (And boy was he kind!)

Only I hadn’t really been there.

My sister and I were not at my father’s memorial or funeral because my mother had thought it was the best thing to do at the time.

Who knows, maybe it was?

If I was 34, and my husband, who I was just about to divorce, dropped dead and left me with two small girls, I would probably think moving to Fiji and selling my kids down the river would be a good idea. Who knows?

Grief is mean and calculating and tricky and gossipy and ugly and stupid.

So, during Steve’s memorial, in the moments when my beloved hearing loss got the best of me and all I saw were moving mouths, I simply went back to 1983 and sat in and listened to them talk about my dad.

I realized how important this ritual is.

I walked up to his larger-than-life photo on the stage, propped next to a surfboard and a Dallas Cowboys jersey (he loved both equally) and I said Goodbye Steve. I loved you. I love you friend.

Do I blame my mom for the fact that I did not get to do that with my dad?

It has simply reminded me of why I love connecting with people. Why I love doing what I do.

I have no problem connecting with my father.

Am I hippy-dippy? Actually, no and I wish I was a little more so.

I realize that my father, and my beloved soul brother Steve, for the brief time they were both in my life, taught me how to be human. They taught me: what it means to connect to someone. To reach over and touch someone’s forearm, to look into their eyes and laugh so hard that I think my insides may fall out of me if I don’t grip my stomach and pray, to be made so alive by their presence that I wonder if I have made them up.

Maybe I have made parts of them up?

Maybe that’s what we do to people to make them fit.

I can make up as much as I want now that they are both gone.

In fact I will.

I am making up that I was at my dad’s memorial and all the stories people told made me laugh so hard I cried, like at Steve’s. And that Steve and my dad are writing comedy sketches up there and when I get there I will have a part in one, maybe two of them.

I didn’t get to say goodbye to my dad Mel at his memorial but I know that other people did. I was there this weekend for Steve and other people who loved him could not make it, so this is for them:

They forgive you and love you.

And it doesn’t matter.

Close your eyes and connect.

They are right here.

Jennifer Pastiloff will be teaching at the Tadasana International Yoga & Music Festival over Earth Day weekend on the beach in Santa Monica, CA, April 20– 22. Click here to check out the festival website and purchase tickets. Enter the code Pastiloff for a $50 discount! (Please note that discount codes expire April 1).
~
Editor: Kate Bartolotta 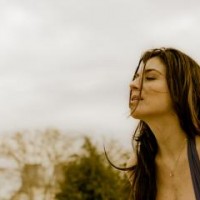