Teachers, Keep it in Your Pants.

My answer to the sex question is simple.

Invariably, they’d ask me out, often while their wife was in the next room. When I informed an unmarried private client that I didn’t date students, he promptly replied “You’re fired. I’ll pick you up at 8.”

At the time, the invitation was flattering. Older, French-Argentine, wealthy, powerful, charismatic and handsome. Anyone with an unresolved father issue was going to jump on that. Later, after therapy and cornering the Haagen Daz market, I understood the come-on to be more about power than it ever was about sex. Fortunately, I never slept with him. A warped Catholic, he enjoyed that. Later, I learned he went through yoga, spin and Pilates instructors like tissues.

Twice, social acquaintances circled back as students, and I dated them. Although I am friends with both now, the power imbalance at the time was palpable. I couldn’t articulate it then and no doubt I chalked it up to my own mesmerizing sexual charisma, but I see now that they were more interested in what I represented as a spiritual teacher than in me as an individual. So I was left as a pedestal-ized figure unable to conduct the relationship as an equal. The discovery that I was a normal person with problems was unwelcome and spelled relationship doom.

Along the way, male teachers hit on me regularly and I received enough assists that screamed “Inappropriate!”to make me go deaf. The first class I ever took class in LA, the teacher taught while simultaneously getting Lisa Bonet’s phone number while she was in downdog. Granted, it’s LA, but still.

As a teacher who learned the hard way, I cannot state strongly enough how wholly antithetical to our humanity these breaches of trust are.  Moreover, when we choose selfishly, it is usually at the expense of women. Not much new or different there. Blaming them is nothing new, either. In some myopic, uneducated yogic circles, they blame ‘karma’ and call it a day. Anything to avoid honest self-assessment. We call this “turning dharma into filth.”

Emotional and spiritual development cannot take place in an unsafe environment. Anyone who comes to a person entrusted with bringing them to a state of health and wholeness, be they a teacher, a priest, a shrink or a doctor, in their precious mind and body deserves physical and emotional safety, at the very least.

Further complicating these breaches is the troubling statistic that that in the U.S., 3 out of 5 women are sexually assaulted by someone they know before the age of 17. For men, the estimates are between 5-10%.  Those women/men are in our classes, ripe to recreate unsatisfactory childhoods and everything that was screwed up about it, all over again. Are we going to meet them at the level their parents did or are we going to actually educate, elevate and eventually, if this is a real yoga experience, liberate?

No doubt these figures are higher, given the reluctance of victims to come forward. As in most families where alcoholism, drug abuse, domestic violence and child abuse take place, the name of the game is shhhhh, don’t tell anyone and never, ever, under any circumstances, disclose against your parent (or who ever perpetrated the crime). It’s the same in Grown-Up Land; rarely do students, employees, parishioners or patients blow the whistle on their chosen “savior.”

The mental health field identified the unstoppable force of transference—the conflation we make between the person who hurt us most and our new found spiritual savior. In intelligent response, the mental health field enacted explicit prohibitions against sexual contact between patient and practitioner.  The persistence of the repetition compulsion (re-creating Mom and Dad and the rest, ad nauseum until you land on a shrink’s couch or married to your Mom) makes it easy, for any of us, to succumb to the power of these unconscious processes. It’s a very strong pull and it’s why there are laws prohibiting any sexual contact.

In my judgment, any teacher who parleys the sacred trust of a student into his/her own “secret” sex club obviously should not be teaching.  All the posturing about light, love and unicorns not surprisingly betrays an unacknowledged and un-integrated dark side, what Jung coined “the shadow.”

Darkness isn’t the problem; denying it and then acting on it inappropriately is.

While we all deserve forgiveness, premature forgiveness is a close cousin to the Stockholm Syndrome.  People who are dysfunctionally devoted to their teacher refuse to believe that their “guru” can do any real wrong, and thus the culture of sweeping our teachers’ dirt under the collective rug perpetuates itself. We see spiritual communities collapse again and again and yet still people defend their “right” to sleep with their students. With all the fish in the sea…really?

This type of catastrophe happens all the time when western ideas of ‘freedom’ collide with eastern theologies that espouse deference as a model for growth. In Tibet, if a monk was caught doing anything remotely out of line, he would be expelled from his community. His parents would have to make back-breaking restitution in order for him to return. We don’t have a cultural system of checks and balances in the West. Here, the party line is “Don’t tell me what to do. I am an adult (as if a true adult would ever take advantage of a weaker person) and she/he is a consenting adult and that’s the end of that.”

There is no such thing as consensual in a relationship predicated on a power inequity. Period. Whether it’s your boss, your shrink, your guru, political leader, your rabbi or your priest, each one has a sacred duty to say “Tom/Sally, put your clothes back on. Now.”

Open discussion of the pros (What are they, again? Oh yes, sleep with me and get closer the God.) and cons, personally and professionally, for both students and teachers is crucial.  In my own program, Conquering Lion Yoga, we recently invited John Merz, Priest-In-Charge of the Episcopal Diocese of Long Island to join the faculty to educate my trainees on the ethics of student/teacher relations. No priest cracks, please, many are better versed given the ongoing scandals faced by the Catholic Church.  For me, given my strong feelings on this issue, this is very exciting and I’d like it to be a part of every teacher training program. It would be nice if there was at least one place in the world where sleeping your way to power wasn’t an option.

And for teachers who want the “right” to sleep with their students, maybe they should have a waiver form students sign before taking your class. The waiver could say something like “I understand that I am wearing tight spandex with my ass in the air with 50 other (mostly) women and that while I am there to get my spiritual on, I understand that the teacher is going to be evaluating both my practice and how fuckable I am.” And if the women are down with that, let the party begin. Otherwise, do the job you were hired to do and teach yoga.

But please know this: on three separate occasions, I asked a class of 50 students to write down on a piece of paper anonymously the worst thing that ever happened to them. I then read each one out loud to the class. By the 15th confession, the room was crying, men and women. Overwhelmingly, the papers described sexual abuse at the hands of a loved one and every single person in that room understood immediately the sacred nature of our shared space and experience.

I suggest to any teacher who feels his or her mat be a ‘grey area’ to try this in their next class and see for yourself the historical content in the room. Its sad, vulnerable and needs defending, not exploiting. 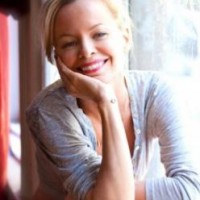 Kelly Morris is unapologetically, famously frank, jacked up on compassion. Like no other yoga teacher you’ve ever seen. Founder of the renowned Conquering Lion Yoga Teacher … Read full bio