Sensitivity to emotions is the uniquely feminine component that women bring to the practice of yoga, and the film illuminates this beautifully!

Vrinda Devi Seth of The Mayapuris

There was a time, ages ago, when the feminine voice was celebrated as wisdom, and power, and the means through which all of humanity was nourished and loved.

Goddess worship decorated the globe and the doors to divinity were believed to exist in the feminine heart.

These times appear to be dawning once again, as we hear their tone echo in the collective feminine voice that defines our twenty-first century, international, female dominated yoga movement.

Humankind’s receptivity to the spiritual insights that flow through the feminine has reached a new peak, and the yoginis of today illuminate it!

As the first rays of sun gently make their way across the rice patty fields and temple domes decorating the Bengali landscape, we find Jahnava Devi Dasi, immersing herself in the Ganges River for bathing.

Though raised by a Jewish family in New York, Jahnava feels at home in rural India, where she continues a yoga practice she began as a teenager, and explores its feminine influences.

While gracefully pouring the sacred water over her head and melodiously swirling Sanskrit mantras off her tongue, Jahnava contemplates the primarily feminine force that is leading forth the yoga movement today.

Reflecting upon how women represent 80% of the 20 million yoga  practitioners in the US alone, Jahnava was inspired to bring forth the voices of these women, in honor of all those yoginis of the past whose voices were rarely, if ever, shared.

Jahnava’s thoughtful research of many years engaged her heart in a very personal and inspiring dialogue with bhakti yoginis of antiquity.

Deeply moved by their visions of bhakti and their personal yoga practices, Jahnava set out to share the stories of these unsung heroines, and pay tribute to the spiritual lifestyles they modeled.

Looking for answers to many of her own questions on the role of female yoga teachers in the world, and the role of motherhood to yoga, Jahnava embarked on a journey to celebrate the feminine voice in yoga, which evolved into the producing and directing of her upcoming film Women of Bhakti.

We find bhakti secretly tucked into the heart of all yoga texts.

It is the divine feminine voice in yoga, emerging in colorful poetic Sanskrit verse and prose. And it began with the collective voices of the Gopi women of Vraja, portrayed in the ancient Bhagavat Purana as the foremost examples of yoga practitioners, both male and female.

So it is to Vraja then, the land of these original yoginis, that Jahnava and her film partner Australian Hilary Tapper, first travel to unfold the story of women in yoga.

Together, they artistically capture visually enticing glimpses into the day-to-day lives of contemporary bhakti yoginis and their meditations on the women of bhakti from the past.

Offering us a rare peek into these yoginis hearts, Jahnava sweetly reconnects us with the origins of yoga, which, according to the bhakti tradition revolve entirely around the divine feminine.

Radha and Bumblebee courtesy of BBT

The axis of the bhakti yoga tradition is Radha, known also as Yogesvari, or she who is the greatest master of yoga. The Gopis are characterized in esoteric bhakti philosophy as each representing one of Radha’s emotions, as every emotion that fills her heart fuels her devotion for divinity, and thus deserves individual attention.

This sensitivity to emotions is the uniquely feminine component that women bring to the practice of yoga, and Jahnava’s film illuminates this beautifully as we listen to today’s women of bhakti speak about their individual yoga practices.

From scholars to dancers, youth to grandmothers, we hear the voices of women resounding with a shared eagerness to connect with the indwelling source of spiritual sustenance in their own beings, as we celebrated their collective enthusiasm.

Hilary engages over a decade of her award winning, filmmaking experience in painting a moving, visual portrait of the way bhakti touches the hearts of souls aspiring to selfless, loving service.

Taking the viewer on a tour of delightful metaphors, Hilary skillfully weaves together images of flowers, and rivers, and sunrises, to exotic music and Jahnava’s poetic and soothing narrative for a uniquely uplifting experience:

“I bow to the women of bhakti, the saints of mystic yoga, who blew the seeds of divine love, into the hearts of women all over the world. I bow to those saints who struggled, and sacrificed, and paved the way for all women to attain pure devotion. Many of them will never be known. This is a tribute to them, the unsung heroines of bhakti.”

Although the film clearly emphasizes the feminine, for bhakti is an ancient tradition of the Goddess, the producers wish to convey a message that transcends gender orientation, as it delivers a universal message of divine love.

Just as the Gopis did in the circular rasa dance, in which they linked arms with each other in love,

Jahnava and Hilary’s film unites in spirit practitioners of yoga of all genders, inviting them to enrich their practices with bhakti, and share the resulting joy with the world.

Empowering the feminine voice in the today’s yoga communities, and exposing the sacred dimension in women’s lives, Women of Bhakti debuts this summer in yoga studios and events around the world. All are invited to experience a screening, which will include a guided bhakti meditation, kirtan, a photography exhibit and open discussion.

For more information of Jahnava’s film and its scheduled screenings, please visit the Women of Bhakti website, or contact Jahnava to host a screening of your own. You can also connect through them via their Facebook page. 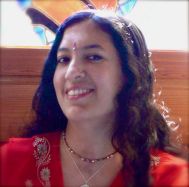